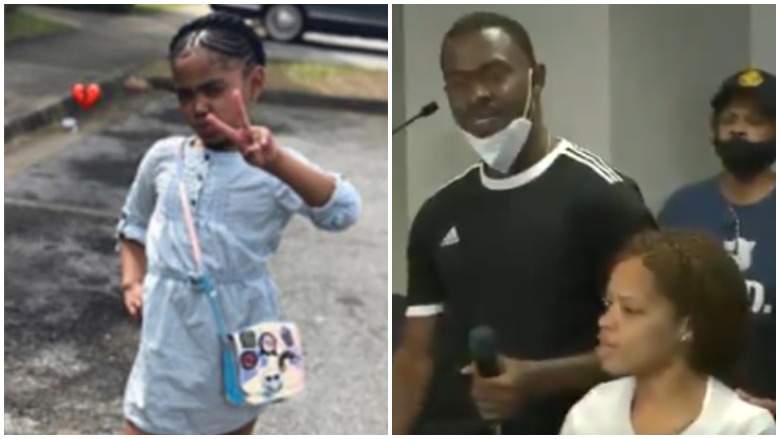 ATLANTA — A day after an 8-year-old girl was fatally shot near a Wendy’s restaurant where Rayshard Brooks was killed last month by police, Atlanta Mayor Keisha Lance Bottoms on Sunday denounced violence that claimed the life of the child — and which she said damaged a movement for racial justice and police accountability.

“Enough is enough,” Bottoms said in an emotional press conference at Atlanta police headquarters in which the mayor and family of Secoriea Turner urged people to come forward with information about Secoriea’s killers.

“I am just asking you to please honor this baby’s life,” Bottoms said. “Please, if you know who did this, please turn them in. These people are a danger to all of us.”

Surrounded by Secoriea’s mother, Charmaine Turner, and other members of her family, Bottoms said Saturday night’s shooting is the fault of armed individuals near the Wendy’s restaurant on University Avenue. Demonstrators for weeks have camped near the Wendy’s where Brooks was shot following a confrontation with police.

Turner noted the time at the press conference, a little before 6 p.m. She said her daughter would be finishing dinner and filming a video of her dancing for the social media service TikTok.

Secoriea’s father, Secoriya Williamson, said his daughter just wanted to get home to see her cousins.

“They say Black lives matter,” he said. “You killed your own.”

The fast food restaurant, which was burned the day after Brooks’ June 12 death, has become a shrine of sorts. It has also been the site of at least two other shootings in recent weeks.

The overwhelming majority of protests against racial injustice and police brutality in Atlanta have been peaceful for more than a month. Bottoms said she supports peaceful demonstrations that have focused the attention of the American public and the world on racial inequities in the wake of a string of killings by police of Black people nationwide.

“That’s an important movement that’s happening,” Bottoms said. “But this random wild, wild west shoot ‘em up because you can, it has got to stop. It has to stop.

“You can’t blame this on a police officer,” she said. “… This is some people carrying some weapons who shot up a car with an eight-year-old baby in the car. For what?”

The killing of Secoriea was part of a spasm of violence that shook Atlanta from sundown on Saturday until the early morning hours of Sunday.

Atlanta police said that more than 20 people were shot, and two others were killed in multiple shootings in the city Saturday night and Sunday morning. These included 14 people wounded at a huge party on Edgewood Avenue. Two of them died.

The Georgia Department of Public Safety headquarters on United Avenue in southeast Atlanta also was vandalized as a protest turned violent.

“While we stand ready to assist local leaders in restoring peace &; maintaining order, we won’t hesitate to take action without them.”

‘She died in my arms’

Protesters have blocked traffic on University Avenue at the Wendy’s and have called for the city to turn the charred restaurant into a peace park in Brooks’ honor. The protesters have taken over streets on occasion, even erecting barricades to block traffic.

The city cleared the barricades in recent weeks following Brooks’ funeral and leaders have tried to negotiate with the demonstrators who have openly carried firearms, which is legal under Georgia law, but has frightened many in the community.

Atlanta police last week said they had removed the barriers from the street outside the restaurant.

Bottoms said she received a text message from Interim Police Chief Rodney Bryant that the barricades had returned about 8:45 p.m. Saturday.

On Saturday night about 9:30, Turner, a friend and Secoriea were traveling in a car when they attempted to turn into a package store near the Wendy’s, police said. They were confronted by a group of armed individuals and police said shots were fired into the car from both the Wendy’s and the area of the package store.

Bottoms said there were at least two shooters.

“They didn’t give us time to make a U-turn,” Turner said. “They shot my tires before we had time to turn around.”

The driver sped to Atlanta Medical Center where Secoriea succumbed to her wounds.

“She died in my arms,” Turner said.

Bottoms noted the sad irony that Brooks talked to police officers during his traffic stop about wanting to get home for his daughter’s eighth birthday. That situation turned violent when the officers tried to arrest him.

Turner cried and said of Secoriea: “She is never gonna make her ninth birthday. She’s never going to make it.”

Councilwoman Joyce Sheperd, along with neighborhood leaders and others, had been working on negotiations with the people who occupied the Wendy’s in recent weeks, but the talks fell through Thursday.

Sheperd said the people on the Wendy’s site were told Thursday that, because the negotiations had soured, the city would be barricading the parking lot. The plan was to install the barricades that very day, but the city didn’t have the type of permanent barriers it wanted to use.

The task was put off until Monday, when the correct materials were expected to be in hand.

Atlanta City Council President Felicia Moore, who had been helping Sheperd, said one of the demands those occupying the property had was for the city to replace the Wendy’s with a community center or a facility devoted to promoting peace. They had a name: The Rayshard Brooks Peace Center.

“We kept trying to express to them that the city didn’t own the property,” Moore said Sunday. “We couldn’t negotiate with them on something that we didn’t own.”

Since the talks broke down, Moore said she had driven past the property at least once and saw just a few people congregating peacefully. After Moore learned of Saturday night’s shooting, she said she texted the mayor and police chief to tell them the occupation of the property needed to be shut down immediately.

At Sunday’s press conference, Bottoms said talks with the people camped out at the Wendy’s are finished.

“Again, I tell you if you are looking to be part of the solution and not the problem then you are going to have to clear out of that area,” she said. “This discussion and mediation is over. At the point that an 8-year-old baby was killed, the discussion has ended.”

About an hour after the press conference, police reported a triple shooting on Pryor Road, about 200 feet from where Secoriea was shot. Police said Sunday night at least one person died.