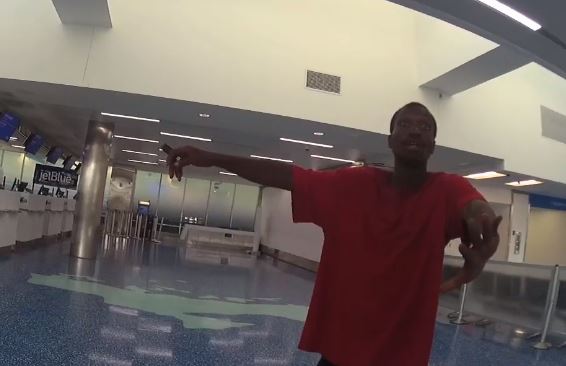 After months of silence from the Broward Sheriff’s Office to the family of Kevon Todd, who died after an altercation with deputies at Fort Lauderdale-Hollywood International Airport, Sheriff Gregory Tony has released video and reports that shed new light.

Robyn Blake, attorney for Todd’s family, said at a press conference on Thursday that Todd was South Florida’s own version of an unarmed Black man being killed by police officers.

At the time, Blake said all they knew of how Todd died was that on April 9 he had rushed through metal detectors at the airport and said he wanted to buy a ticket and board a plane.

Todd’s family says he suffers from an undiagnosed mental illness. On the day of the incident, he looked homeless and unkempt. BSO said deputies were called to the terminal after Todd began yelling at employees. Within hours of deputies arresting him, Todd died.

At Thursday’s press conference, Todd’s family was demanding answers about what happened. It had been 84 days since the incident, and Blake had still not been given airport surveillance video, body camera footage or a medical examiner’s report, she said.

““Furthermore, I have tasked our Department of Fire Rescue to conduct a thorough administrative review of their response to this incident to ensure we did everything possible to save Mr. Todd’s life,” Tony said in a statement.

According to the body camera footage, a deputy confronted Todd while inside the JetBlue terminal. He had been called over after a report came in of a man yelling at JetBlue workers, deputies said.

The deputy repeatedly told Todd to leave the terminal and step outside as Todd seemed agitated and first told the officer he was checking for a ticket, then asked the deputy to help him get a ticket and again changed his story to a family member had bought him one.

After a few minutes of back-and-forth, Todd went with the officer outside. Another deputy came to assist, and both told Todd he needed to leave. After continued refusal from Todd, deputies told him again to leave or they would arrest him.

Todd then walked away from officers back toward the entrance to the terminal. After gaining distance on the deputies, Todd went back into the terminal and walked toward a TSA checkpoint. After deputies saw this, they sprinted after Todd.

Once they caught him, a struggle ensued and it took three deputies and a JetBlue employee to detain and cuff him. During the altercation, one of the deputies was bitten or scratched.

Deputies then lifted and carried Todd out of the terminal and laid him on the ground on his side. During the initial scuffle, Todd was held on the ground. He was screaming, moaning and rocking back and forth.

While Todd and deputies were outside the terminal waiting for fire rescue, a deputy put a face mask on Todd.

Veda Coleman-Wright, BSO’s public information office director, said that the deputy put a mask on him to prevent the spread of the novel coronavirus.

“Our deputy was simply showing compassion when she put the mask on Mr. Todd. She saw a need, and she did the right thing to protect him and her colleagues during this time of COVID-19.”

Most, but not all, of the deputies were wearing masks during Todd’s arrest.

Once paramedics arrived, eight minutes after Todd had been brought outside, Todd became unresponsive. The sheriff’s office says paramedics began “life-saving measures” and took him to Broward Health Medical Center. When he arrived at the hospital he was alive, but an hour and a half later he pronounced dead.

“My heart breaks for the family of Kevon Todd, and I hope the details released today give them a better understanding about what happened to their loved one,” Tony said.

Spat between Ben & Jerry’s, UK govt. over treatment of migrants...