Home Blue Lines CHOP Zone leader arrested during raid, had warrants for out for his... 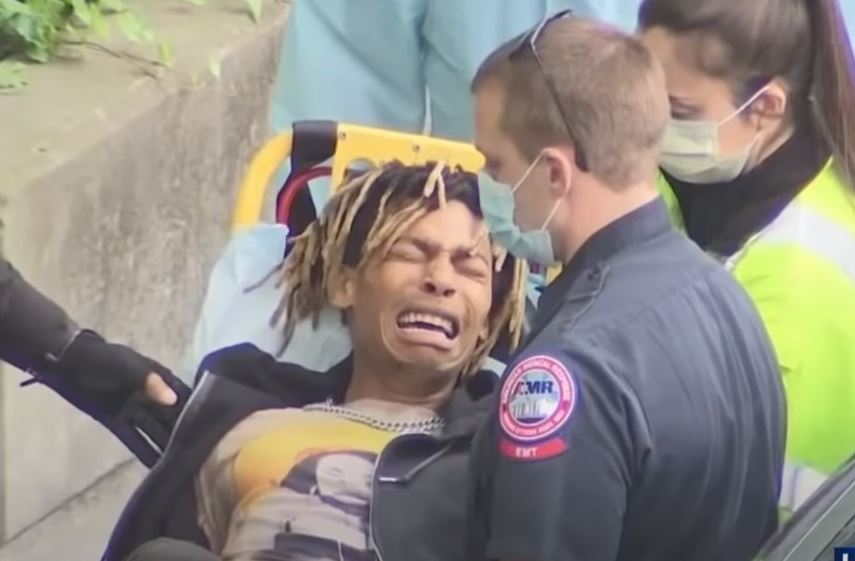 According to KIRO, one of the leaders of the CHOP zone has been arrested after police found he had warrants out for his arrest stemming.

The man in question, who KIRO did not identify as formal charges have not been made yet, apparently is a suspected car thief.

The man, known as River, was seen at a round table speaking with the Mayor of Seattle about demands the group had. He had also ambushed a police reform activist during an interview.

He ran across the freeway to get away from police during Tuesday’s raid of the illegal zone. He was eventually injured and taken away by paramedics.

Seattle police and other city employees worked Tuesday morning to remove some barriers at the Capitol Hill Organized Protest, or CHOP, with heavy equipment at 10th Avenue and East Pine Street. But within an hour, protesters had erected their own makeshift barricade as a replacement.

Some people who had been staying in tents at Cal Anderson Park packed up and left on Tuesday, though, saying that after multiple shootings over the past couple of weeks, the park didn’t feel safe anymore.

Tuesday’s back-and-forth over barriers was the latest episode in a kind of stalemate between the city and protesters who have occupied several blocks around the park and the Police Department’s East Precinct for about three weeks, since the police left the precinct following standoffs and clashes with protesters calling for racial justice and an end to police brutality.

Calls to bring law enforcement back to the East Precinct and shut down CHOP have been amplified by four shootings in the area over a roughly nine-day span, including one Monday morning that killed a 16-year-old boy and wounded a 14-year-old boy.

The King County Medical Examiner on Tuesday identified the teenager killed Monday morning as Antonio Mays Jr. and said he had multiple gunshot wounds. The younger teen has been at Harborview Medical Center and was upgraded Tuesday morning from critical to serious condition, according to hospital spokesperson Susan Gregg.

Protesters say the violence isn’t connected to the movement and they won’t leave until their demands are met.

“We’re trying to take out some of the barriers. We said all along we were trying to open the streets,” Seattle Department of Transportation Director Sam Zimbabwe said Tuesday morning in an interview streamed from the CHOP by Converge Media.

Seattle police Assistant Chief Adrian Diaz said the barriers would be removed incrementally to allow traffic to move through portions of the road that had previously been closed off.

Zimbabwe also said the city was not expecting to clear out the barriers in front of Seattle police’s East Precinct on Tuesday.

Within an hour of the barriers being removed by City of Seattle crews, demonstrators set up a makeshift barricade using the original CHAZ sign, several couches and trash cans.

Barricades remained Tuesday morning on 11th and 12th avenues and East Pine Street in a spot closer to the East Precinct. About a dozen police officers stood near backhoes as they moved barriers near 10th and East Pine.

Diaz did not provide a timeline for when the Police Department would move back to the East Precinct.

“We’re just making sure we’re having our roads open and have the ability to get people needed services, because there are a lot of people in crisis in this area,” he said.

A protester approached Diaz and asked the Police Department to work with the protesters to keep the streets safe.

“You guys are using our tools, we paid for all that right there,” the protester said, pointing to the backhoes. “We are trying to protect these streets right here.”

Earlier Tuesday, the driver of an unmarked truck drove up to the barricade on 11th Avenue and tried to remove a barrier. Around 8:30 a.m., a small group marched outside the CHOP perimeter, chanting, “Black lives matter.”

Also on Tuesday morning, a sign was posted at Cal Anderson Park saying the park was to close at noon, and Seattle Public Utilities removed a hand-washing station near the park’s entrance.

Flyers placed in front of tents in the park said the noon closure was for cleanup and repairs but the community garden and art created by protesters would be left alone. Another flyer urged people without shelter to seek services at a tent at Seattle Central Plaza on East Pine Street and Broadway.

Chuck Windell, 41, had been living homeless before he came to the CHOP. He went over to the Navigation Team tent to see if he could get a hotel voucher, but city workers offered him a shelter referral instead.

Coronavirus daily news updates, June 30: What to know today about COVID-19 in the Seattle area, Washington state and the world

Windell said he’s been barred from certain shelters — he doesn’t like staying in them and gets agitated around so many other people. He lost his last apartment in February, he said.

“I don’t know [where I’ll go],” Windell said. “I think I’m going to try and charge my phone and hustle up some money so I can get a cup of coffee.”

Jamie Wilson, a resident of the 12th Avenue Arts building, had come out to explore the park to see if people were getting the resources they needed to move on. He was concerned that there weren’t more options available for people.

Several groups took down their tents Tuesday and loaded supplies into cars or into garbage bins. But some in tents said they were intent on staying.

Devon Espy, 22, was among the departures.

“I mean, it was fun while it lasted,” he said as he started organizing his things in a tent. “It’s been really dangerous at night.”

Espy said he’s seen people who are armed and that on Sunday — before the fourth shooting in a nine-day span — the tension at the CHOP was palpable. At this point, he said, the CHOP should end.

“If not, if you’re going to keep going on, there’s going to be more shootings for sure,” he said.

Orian Grant, an outdoor educator, has been working for the past two-and-a-half weeks in the community garden. He said he would try to keep working on the garden and that he wants to find out a clearer narrative of what happened in the shootings.

With volunteer security and medics in the CHOP, “it’s been a hodgepodge patchwork of people who are trying to do the right thing,” Grant said.

“Without municipal health, without the Police Department to be here to kind of oversee that, it falls on the community to do the right job. And nobody wants to see children killed. Nobody wants to see young teens, especially Black teens in this movement, injured or hurt,” he said. “I think that it doesn’t just fall on Jenny Durkan or our police chief or [Gov.] Jay Inslee. It falls on our community as a whole to identify how are we going to stop and mitigate this type of violence in the future.”

On Monday, a representative of Mayor Jenny Durkan’s office said in an email that the original message behind the protests had been “undermined by the violence in the area.”

“The area has increasingly attracted more individuals bent on division and violence, and it is risking the lives of individuals,” wrote spokesperson Ernesto Apreza. “There has been unacceptable behavior by individuals who are preventing city employees from doing their job.”

Apreza said the mayor met with demonstrators last week to discuss her safety concerns and to ask people to depart. Hundreds left on their own, he said, but dozens remained.

“Multiple service providers and City departments have dispatched a wide range of social services to help individuals with needs move out of [the] Capitol Hill area and, if experiencing homelessness, provide access to shelter or temporary housing,” Apreza wrote.

Artists and demonstrators have begun cataloging and removing plywood to preserve the art for future installations, Apreza said.

The CEO and executive director of Community Roots Housing, which owns 13 properties housing 694 people in the vicinity of the CHOP, released a joint statement Tuesday saying it’s time for the protest zone to be shut down.

At its start, the organization’s leaders wrote, the CHOP (then called CHAZ, the Capitol Hill Autonomous Zone) was a space to come together in protest, “to debate, and to demand change.”

“But what’s happening in the area now has little to do with the movement for Black lives,” they wrote in the statement. “Most of the activists have moved on. The park has become an encampment, our residents have been threatened and chased and businesses are being hurt.”

Community Roots Housing residents “have become victims of an occupation better characterized today by its violence, chaos and killings than anything else…” they wrote. “We are adamantly supportive of the Black Lives Matter movement and of all Black lives, we are adamantly supportive of deep police reform and leading with compassion instead of guns. But forcing us to choose between anarchy and police brutality is a false dichotomy. Compassion and law enforcement should not be mutually exclusive.”

Also on Tuesday, Durkan asked the Seattle City Council to investigate Councilmember Kshama Sawant for several actions, such as opening City Hall to protesters on June 9 and taking part in a protest march to Durkan’s home on Sunday. In a letter to Council President M. Lorena González, Durkan noted that the council may “punish or expel a member for disorderly or otherwise contemptuous behavior.”

Asked about Durkan’s move at the news conference, Sawant criticized the mayor for allowing the Police Department to tear gas people protesting police killings of Black men and described the mayor’s letter as “an attack on the Black Lives Matter movement.”