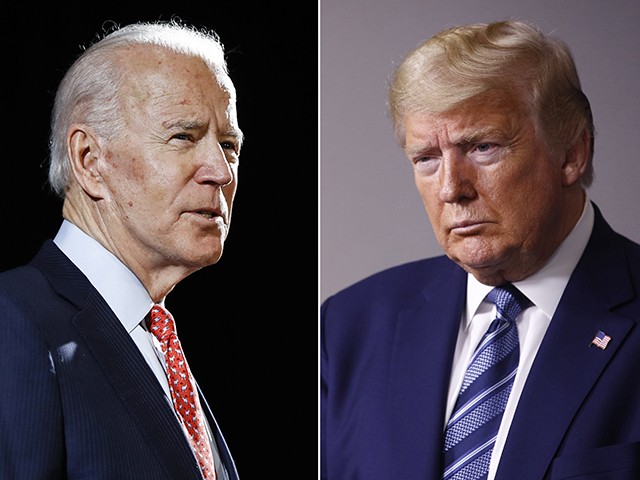 President Donald Trump and presumptive Democratic nominee Joe Biden are in a “virtual tie” in North Carolina, according to a poll released by East Carolina University Center for Survey Research on Tuesday.

The poll of 1,149 registered voters in the Tar Heel State conducted between June 22 and June 25 shows former Vice President Bident with 45 percent support compared to 44 percent for President Trump.

Biden’s one point margin is within the poll’s 3.4 percent margin of error.

Besides the head-to-head match up questions for the statewide races, the poll focused on questions related to voter attitudes about responses to the coronavirus pandemic by President Trump and Gov. Cooper:

Do you think it was the correct decision to resume dine-in services at restaurants in North Carolina?

Bars in North Carolina remain closed. Do you think bars should be allowed to reopen?

Do you usually wear a face mask when out shopping?

How worried or not worried are you about the current spread of coronavirus cases in North Carolina?

Do you approve or disapprove of Governor Roy Cooper’s handling of the state government’s response to the coronavirus outbreak in North Carolina?

Do you approve or disapprove of President Donald Trump’s handling of the federal government’s response to the coronavirus outbreak in the United States?

In that poll, Biden leads Trump by 7 points, 51 percent to 44 percent.

The methodology of the Change Research/CNBC poll is markedly different from that of the ECU poll and most other polls in that it does not make phone calls (either live or IVR) with samples selected from registered voter files:

Change Research conducted a poll of 3,739 likely voters June 26-28, 2020 across 6 competitive battleground states: Arizona, Florida, Michigan, North Carolina, Pennsylvania, and Wisconsin. A companion national survey of 1,663 likely voters was also conducted June 26-28, 2020. Unless otherwise stated, the results presented in this analysis are among battleground state voters. The margin of error, as traditionally calculated, is ±1.6% for the battleground and ±2.4% for the national poll. Change Research reaches voters via targeted online ads that point people to an online survey instrument. Our Dynamic Online Sampling establishes and continuously rebalances advertising targets across region, age, gender, race, and partisanship to dynamically deliver large samples that accurately reflect the demographics of a population. Post stratification was done on state, gender, age, race, education, and 2016 presidential vote.