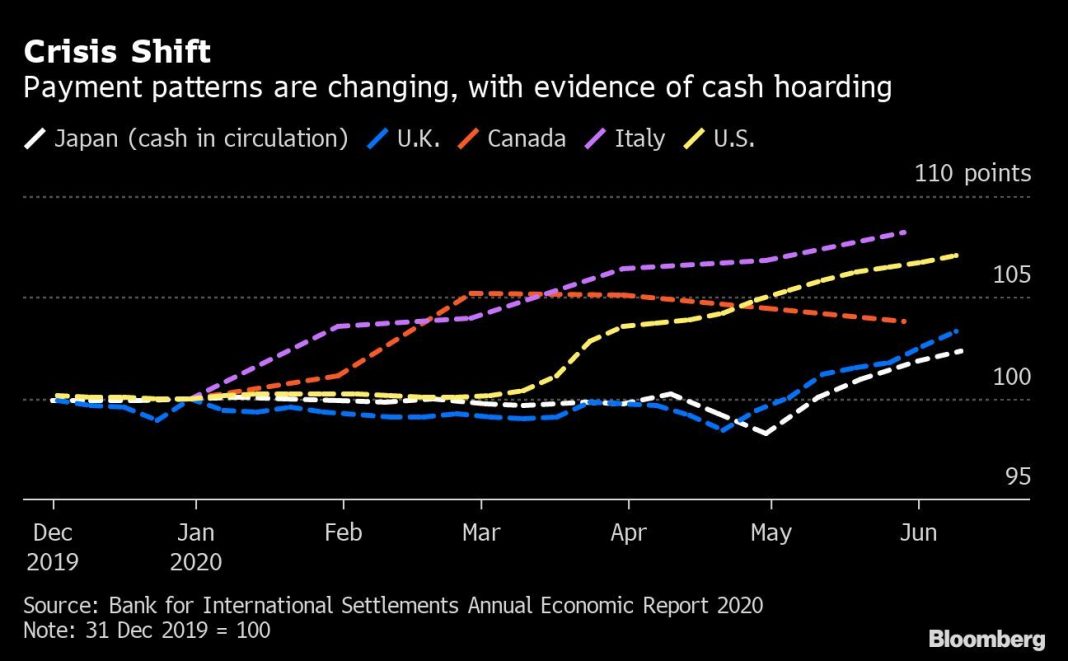 (Bloomberg) — People appear to be bunkering cash amid the coronavirus outbreak, according to a study that seeks to debunk the notion that the pandemic was hastening the demise of paper money due to e-commerce or fears of infection.

While some analysts argue that going completely cashless would help the global economy become more efficient, an abrupt end would hurt people with no access to the banking system. It would also pose a challenge to small businesses that find the costs of going digital too expensive.

“While the economic shutdowns and increased use of online retailing are currently diminishing cash’s traditional function as a medium of exchange, it seems that this is being more than offset by panic driven hoarding of banknotes,” Goodhart and Ashworth wrote in a paper for the Centre for Economic Policy Research.

“Cash in circulation has actually been growing strongly,” they wrote.

The findings jar with the view expressed by U.S. President Donald Trump’s former economic adviser Gary Cohn, who argued recently that the virus was speeding up the disappearance of cash.

It’s easy to see why such a prediction could be appealing. The use of paper money has been on the decline in some countries for years, due to the spread of credit cards and the technological developments that led to the rise of mobile-phone wallets. A research report by HSBC Holdings Plc in April said that the shift away from cash an “acceleration of an already ongoing trend.”

Michele Bullock, an assistant governor at Australia’s central bank, said in a speech last month that while cash remains important, Covid-19 might be the “ultimate disrupter” of the payment system. ATM withdrawals in Australia were down 30% in April compared with the previous month, she said.

But data cited by the Bank of International Settlements supported the findings of Goodhart and Ashworth, showing that the rise in digital transaction during the pandemic wasn’t necessarily at the expense of the old stuff.

“Precautionary holdings of cash have risen in some economies – even as its use in daily transactions has fallen,” it said.

Three-Quarters of Britons See Illegal Migration as a Serious Issue