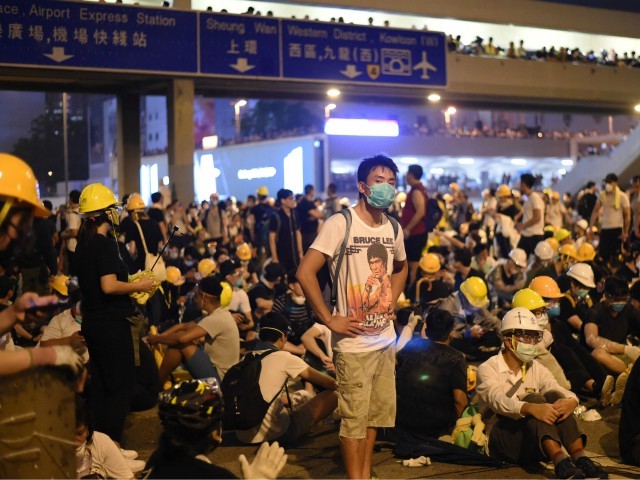 Pro-democracy activists in Hong Kong are primed for demonstrations after the Chinese Communist Party approved its “national security” law on Tuesday morning, a day before the 23rd anniversary of the handover of Hong Kong from the British Empire.

The legislation, passed unanimously by China’s National People’s Congress, represents the most serious violation of the “One Country, Two Systems” policy China agreed to since the handover of Hong Kong in 1997.

Under the new law, any activities considered as undermining Beijing’s authority are criminalized. Examples of such “crimes” will include “secessionism” or working with foreign countries to advocate against the interests of the Communist Party. The law also bans “terrorism” and “subversion of state power.”

Hongkongers are once again preparing to take to the streets in protest against Beijing’s interference, although the region’s generally pro-China police force has banned the annual July 1 pro-democracy march for the first time since 2003, citing violence at previous rallies and public health concerns around the Chinese coronavirus pandemic.

The Civil Human Rights Front (CHFR), which has organized the upcoming protests, sent members to appear in court on Tuesday to appeal the ban. The CHFR’s convenor, Figo Chan, told the press on Tuesday that the demonstration would take place regardless of whether their appeal was rejected.

“We wish to bring a message of solidarity by collaborating with various councilors from different camps,” said Chan. “Citizens must come out on July 1st.” He added that if the ban should be upheld, pro-democracy lawmakers Eddie Chu, Wu Chi-wai, and several prominent activists will help co-organize the demonstration anyway.

A group of local councilors, activist groups, and foreign politicians published an open letter following the bill’s passage on Monday calling on the international community to sanction China over what they described as a threat to the “fundamental freedoms, human rights, rule of law, and autonomy” of Hong Kong.

As a principled and coordinated response to the erosion of Hong Kong’s autonomy and freedoms, we call on countries to introduce Magnitsky-style targeted sanctions against Chinese and Hong Kong officials, individuals, and organisations who are complicit in human rights abuses, erosion of freedom, and undermining of the rule of law in Hong Kong. Sanctions should include entry restrictions such as persona non grata designations, assets freezes, and restrictions on third parties from dealing with or acting for such persons.

Hong Kong’s pro-democracy movement began back in 2014 with the “Umbrella Movement,” which saw millions of citizens take to the streets against proposed reforms to their electoral system. Widespread demonstrations have taken place regularly since then as Beijing continues to encroach on the city’s freedoms through the introduction of new laws undermining its autonomy. The most famous of these was the proposed, yet ultimately unsuccessful extradition law that would have allowed criminal suspects to be extradited to China in order to face trial.

Kansas man who murdered woman on cruise ship gets more than...