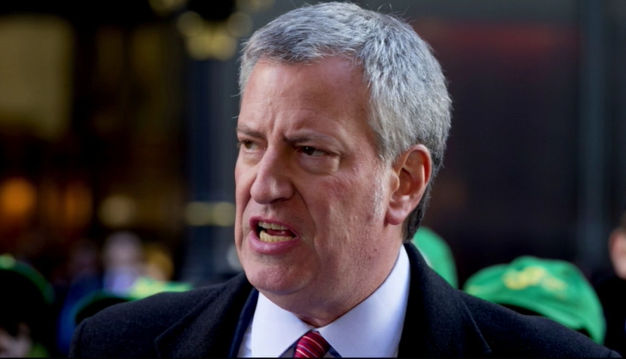 NEW YORK, N.Y. — Mayor Bill de Blasio and the City Council have reached an agreement on an $88.1 billion fiscal year 2021 budget which includes $1 billion in cuts to the NYPD, shifting that funding to NYCHA and youth programs.

The budget has taken a more than $7.2 billion hit as a result of the coronavirus pandemic since the mayor unveiled a $95 billion fiscal 2021 spending plan in January

The City Council will vote on a final budget plan Tuesday evening, and so far, at least two of the Island’s three City Council members — Republicans Joe Borelli (R-South Shore) and Minority Leader Steven Matteo (R-Mid Island) — plan to vote against the budget because of the cuts to the NYPD’s budget.

“We’re about to start fiscal year [2021] tomorrow and the fiscal 2021 budget will be $88.1 billion in contrast to the budget that I announced at the time of our annual preliminary budget presentation in February,” de Blasio told reporters during a press conference Tuesday.

De Blasio, who initially opposed slashing the NYPD’s $6 billion budget by $1 billion, said cuts to the department would be made by canceling the upcoming recruitment class in July, reducing the department’s overtime spending while also transferring school crossing guards and homeless engagement from the NYPD to other agencies.

As of the result of the cuts, the NYPD’s 36,000 uniformed headcount will be reduced by 1,163 — the number of recruits that had been slated to be hired by the department after the July recruitment class.

An NYPD recruitment class is expected to resume in October, de Blasio said.

De Blasio said “redeployments” would ensure New Yorkers remain safe amid a reduction in the NYPD’s slated headcount and cuts to the department’s overtime spending.

Another $537 million in capital will be shifted from NYPD to NYCHA and youth recreation centers.

The mayor has been scrambling to close a $10 billion budget gap that could force the city to layoff 22,000 municipal employees by Oct. 1.

He has asked the state Legislature for “borrowing authority” that would provide the city with a $7 billion safety net for officials to dip into over the course of multiple years if needed and has also been calling on the federal government to bail the city out with another stimulus bill.

But the federal government has yet to act de Blasio has not yet been granted the borrowing authority he needs.

He said Tuesday that $1 billion in labor savings was also pegged in the budget and warned that if he is unable to get the funding he needs to close the budget gap, he would have to move forward with the layoffs.

“I will be voting no on the FY21 budget today. This is not a decision I take lightly, but, as I have said previously, I do not support the excessive cuts to the NYPD,” Matteo said ahead of the vote.

Echoing Matteo’s concerns, Borelli said he would vote no on the budget because he did not want his name associated with cuts to the NYPD, which he said would in turn make New York City a “more violent place.”

North Shore Councilwoman Debi Rose, a Democrat, declined to comment on how she plans to vote on the budget when reached, only saying she was pleased she was able to get adequate funding for youth services.

Rose has previously said she supports shifting funding from the NYPD, but would not commit to supporting the $1 billion cut to the department.

Also slated in the fiscal 2021 budget is a 1,600 headcount reduction across all city agencies saving the city $100 million in costs and $400 million in cuts to the Department of Education over two fiscal years.

“We’ve had to reexamine every agency and ask them to dig deep and find savings, some savings, clearly came from things that just couldn’t happen because of the coronavirus, but others were more programmatic,” de Blasio said.