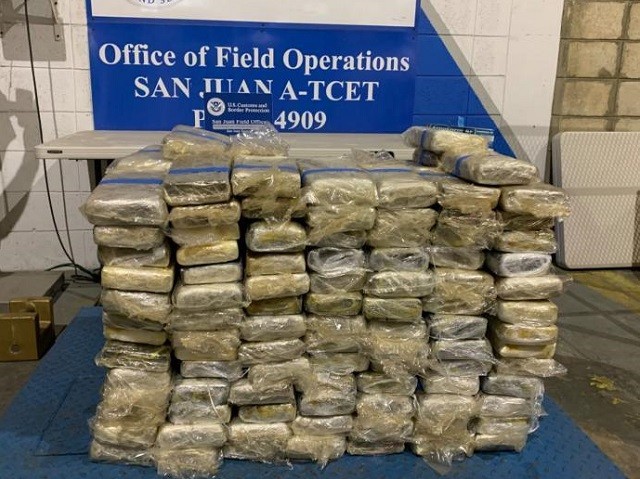 U.S. Customs and Border Protection officers in Puerto Rico seized more than 1,000 pounds of cocaine in incidents over the past three weeks. Officials estimate the street value of the cocaine to be approximately $13 million.

Enforcement team members inspected the ship utilizing non-intrusive imaging systems and found several anomalies in a lowboy trailer. A physical search uncovered 231 packages believed to be packed with drugs. Officers field-tested the contents and found them to be consistent with cocaine, officials stated.

Offices weighed the drugs and determined the cocaine has an estimated street value in excess of $7 million.

“Transnational Criminal Organizations continue to use the international supply chain to conceal narcotics within legitimate cargo”, Roberto Vaquero, Acting Director of Field Operations in Puerto Rico and the U.S. Virgin Islands said in a written statement. “Our officers’ expertise, along with the utilization of all available tools, resulted in the detection of these narcotics.  Our communities can feel safer knowing that the men and women of CBP are securing their borders.”

Contraband Enforcement Team members searched the same ship on June 10. He M/V Kydon is a Greek-registered cargo/passenger ship that regularly sails between Puerto Rico and the Dominican Republic. The team discovered eight duffel bags they suspected to be loaded with drugs, officials reported.

The team searched the duffel bags following a K-9 alert and a non-intrusive imaging inspection and found 20 bricks of drugs. Officials said the drugs tested positive for cocaine. The officers weighed the cocaine and estimated the value of the 492-pound load to be approximately $6 million.

The two incidents led to the seizure of more than a half-ton of cocaine with a combined estimated value in excess of $13 million.