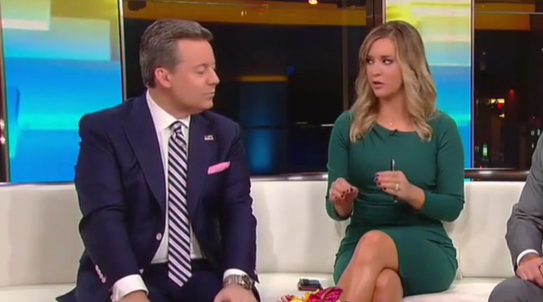 In a memo to staffers Wednesday, Fox News Media CEO Suzanne Scott and Fox News Media President and Executive Editor Jay Wallace said that a former employee filed a complaint on June 25 “involving willful sexual misconduct in the workplace years ago.” Henry was taken off the air while an outside law firm conducted an independent investigation into the matter.

“Based on investigative findings, Ed has been terminated,” they wrote.

“Fox News Media strictly prohibits all forms of sexual harassment, misconduct, and discrimination. We will continue striving to maintain a safe and inclusive workplace for all employees,” the memo continued.

No other details about the complaint are known. Henry hasn’t commented publicly about it.

He came to Fox News from CNN in 2011 to become the network’s chief White House correspondent. That stint, however, was interrupted in 2016 when Henry took a four-month leave of absence after a tabloid exposed an extramartial affair with a Las Vegas hostess.

He was working as chief national correspondent when Fox News tapped him to replace Bill Hemmer on “America’s Newsroom” in January after Hemmer moved to afternoons in Shepard Smith’s old slot.

Henry isn’t the first high-profile Fox News personality to be accused of sexual misconduct. Former CEO Roger Ailes faced complaints from multiple women including former “Fox & Friends” anchor Gretchen Carlson, who received a reported $20 million settlement from the network in 2016. Bill O’Reilly was forced out in 2017 after the New York Times reported “The O’Reilly Factor” host paid millions of dollars to multiple women who accused him of sexual harassment and other inappropriate behavior.

“As all of you know, in January 2017 we overhauled our entire Human Resources operation and instituted annual Inclusion and Harassment Prevention training which has since educated our entire workforce,” Scott and Wallace wrote in the memo. “We encourage any employee who has a sexual harassment, discrimination or misconduct complaint of any form to report it immediately, as we have said repeatedly over the last four years.”

Sandra Smith will continue to anchor “America’s Newsroom,” which airs weekdays from 9 a.m.-noon, alongside a rotating list of Fox News personalities until a permanent replacement is named.