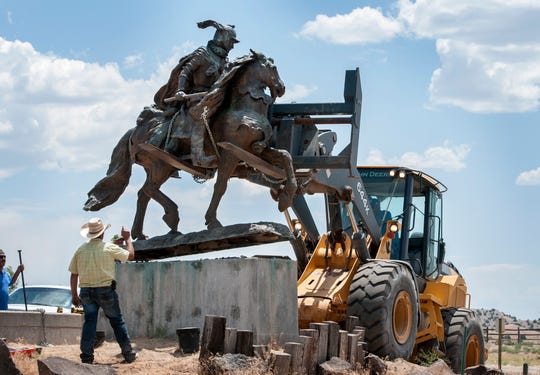 The protester demanded that a statue of Father Junipero Serra needs to be taken down from the steps of Ventura City Hall.

As Confederate statues and symbols are removed nationwide, activists are calling for monuments to those who contributed to the genocide of Indigenous people to be toppled as well.

“It is an act of violence to even have the statues in our homelands,” said Elena Ortiz, chair of the Santa Fe Freedom Council of The Red Nation, a social justice organization. “It’s not just the statue, but it’s what it represented: the celebration of our genocide.”

“[The conquistadors] brought with them not only these weapons of mass destruction, but also the imposition of the Catholic Church and the imposition of a patriarchal government on peaceful matrilineal societies … those colonially imposed systems exist to this day, and have impacted generations.”

In Los Angeles and San Francisco, statues of Junípero Serra were toppled by protesters. In New Mexico, Juan de Oñate statues are now in storage. Diego de Vargas was carried out of Santa Fe with a crane. And in Florida, Juan Ponce de Leóns were covered in spray paint and rotten eggs.

Rio Arriba County workers remove the bronze statue of Spanish conquerer Juan de Oñate from its pedestal in front of a cultural center in Alcalde, N.M., Monday, June 15, 2020. Crowds of people for and against the removal lined Highway 68 near of the center. (Eddie Moore/The Albuquerque Journal via AP) (Photo: Eddie Moore, AP)

While many celebrate these protests and removals, they haven’t come without controversy. The U.S. Spanish Embassy weighed in, saying that defending the Spanish legacy is a priority — and that educational efforts will continue for “the reality of our shared history to be better known and understood.”

For activists like Ortiz though, tearing down these statues is a step in the right direction of being honest about history.

“I believe that history is part of a fabric that communities are built on…It’s not about erasing history, it’s about removing figures that are inappropriate to be worshiped.”

Ortiz says the country has been “simmering” with institutionalized, systemic racism for a long time.

“Without liberation for all, there’s no liberation for any of us,” she said. “Every movement from Black Lives Matter, to defund the police, to tearing down these statues shows a deep, deep dissatisfaction with the state of the world right now.”

Here’s a closer look at these statues:

Junípero Serra (1713-1784) was a Spanish Franciscan priest and missionary credited with bringing Catholicism to present-day California when it was a Spanish colony. In 2015, he gained sainthood when he was canonized by Pope Francis.

A statue of Father Junipero Serra is seen in front of the San Gabriel Mission in San Gabriel, California on June 21, 2020. – Serra, recognized as one of the most important Spanish missionaries and one of the founding priests of the San Gabriel Mission in 1771, the first of nine missions across California, was canonized by Pope Francis in 2015 but remains a controversial figure especially by California’s Native Americans who accuse him of destroying their culture and tribes. (Photo by Frederic J. BROWN / AFP) (Photo: FREDERIC J. BROWN, AFP via Getty Images)

Why is Serra protested?

Native tribes in Alta California, including the Chumash and Tongva, were often forced to convert nearly at gunpoint, according to PBS. They could be beaten, imprisoned, or hunted down for disobedience. Serra in particular is known for enslaving Native American people.

Many who converted only survived mission life for about 10 years. In addition, mostly because of disease, the Spanish were responsible for the immense population decline of Indigenous people in the region — from around 300,000 in 1769 to approximately 200,000 by 1821.

Where are (or were) Serra’s statues?

There have been statues of Serra throughout California, including San Francisco and Los Angeles. Last weekend, activists toppled those statues.

Since then, further controversy has erupted in local meetings as well as on social media between those who see Serra as a saint and the toppling as disrespectful, and those who see him as part of genocide and the statues’ removal as overdue.

“[Serra] was a man ahead of his times who made great sacrifices to defend and serve the indigenous population and work against an oppression that extends far beyond the mission era,” The California Catholic Conference of Bishops said in a statement. “If that is not enough to legitimate a public statue in the state that he did so much to create, then virtually every historical figure from our nation’s past will have to be removed for their failings measured in the light of today’s standards.”

Junípero Serra was responsible for a system of enslavement that decimated California native communities, his recent canonization was a shameful cover up of genocide, and the day we take down every public statue of him can’t come soon enough https://t.co/SeBtMu2PgJ

Spanish conquistador Juan de Oñate (around 1550-1630) led the effort to colonize present-day New Mexico for Spain. He was the state’s first colonial governor.

This bronze statue of Don Juan de Oñate leading a group of Spanish settlers from an area near what is now Ciudad Chihuahua, Mexico, to what was then the northern most province of New Spain in 1598 stands outside the Albuquerque Museum in Albuquerque, N.M., on Friday, June 12, 2020. Two public statues of Spanish conqueror Juan de Oñate in New Mexico are drawing renewed attention and criticism as memorials erected in honor of Confederate leaders and other historical figures worldwide become a focus of protests. (AP Photo/Susan Montoya Bryan) (Photo: Susan Montoya Bryan, AP)

Why is Oñate protested?

While many New Mexicans trace their family roots or legacy back to Oñate and celebrate his history, the conquistador was also described as a despot who inflicted violence on Indigenous populations — particularly the Pueblo people.

In the Acoma Massacre of 1599, 800 to 1,000 Acoma Pueblo people were killed. Among survivors, adult men were sentenced to foot amputation and 20 years of servitude, according to PBS. Children were sent to Mexican missionaries, but some scholars believe that they were later sold into slave markets.

Other records say that Oñate and his men raped Pueblo women, and stole from or enslaved tribal communities. Years later, Oñate was found guilty of some of these crimes and banished from New Mexico.

Where are (or were) Oñate’s statues?

The Red Nation pushed for the removal of Oñate statues in Alcalde and Albuquerque, New Mexico.

According to Ortiz, the Alcalde statue sat on traditional Ohkay Owingeh land. The Red Nation planned a demonstration for June 15, but a county official ordered the Oñate to come down hours before, in order to protect it from protest damage. The removal resulted in a mix of celebration and controversy, as it is unclear if it’s a permanent change.

Northern NM, Monday! The removal of Oñate from Tewa Lands is justice. pic.twitter.com/9Y1y40pSgq

Pueblo women and femmes put bloody handprints on the base of the statue for MMIWG because Oñate was a murderer and a rapist. https://t.co/pnSBkZUkMSpic.twitter.com/geCnnq0dSn

That same day, during a demonstration at the Albuquerque statue, a counter-protester was arrested and charged with battery after a protester was shot. The protester was in critical but stable condition. The city later announced it would take the statue down.

Ortiz found out about the Albuquerque shooting shortly after celebrating the removal of the Alcalde statue.

“It really tempered our celebration,” she said. “It made us realize how serious all this is, and the lengths that people will go to protect property over lives.”

“It’s difficult when people are more upset over the destruction of a statue than they were over the fact that this man destroyed Acoma Pueblo.”

Another Oñate statue sits in Texas outside the El Paso International Airport. It was vandalized the week of June 12 with paint and graffiti — including, “Your god is not my god” in Spanish — but it still stands.

Who was Diego de Vargas?

He is known for “reclaiming” Santa Fe, New Mexico in 1692 — an entrance, or “Entrada,” that has historically been re-enacted and celebrated each year during the city’s annual Fiesta de Santa Fe.

Why is de Vargas protested?

In 1692, after the Pueblo Revolt of 1680 — a rebellion in which Pueblo and Apache people successfully overthrew and chased out Spanish rule — de Vargas led a Spanish reconquest of the territory, which many referred to as “bloodless.”

The calm did not last. Just a year later, in 1693, de Vargas returned to Santa Fe with more soldiers and settlers, fighting his way into the city. Once he was able to claim the capital, he ordered the killings of about 70 Pueblo men, and sent women and children to be servants for the colonists.

Where are (or were) de Vargas’ statues?

Santa Fe Mayor Alan Webber ordered the statue of de Vargas to be removed June 18, which it was — by crane.

Webber’s proclamation of emergency called for the removal of three statues in city property, including de Vargas — which is currently in “safekeeping.”

“It is time to stop celebrating violence and it is time to celebrate the reconciliation in our future,” Webber wrote. “We have arrived at a moment of moral truth. Rather than shrink in fear from this moment we need to embrace it…It is long overdue. We need to move past the monuments and turn a page in our history.”

“People of good conscience are coming together to change how we think about powerful symbols like statues. It is no longer enough to present just one version of history. We owe it to all those who lived it to portray the full complexity of our shared past,” wrote Lynn Trujillo, Secretary of the Indian Affairs Department. “These statues, which celebrated the killing of Native peoples, have excluded New Mexico’s tribes from this shared history. We look forward to supporting all those who want to work toward a more complete retelling of our history.”

More support for the removal of local monuments, seen as conveying racism, as this movement blends with, and gains momentum from, its Black Lives Matter allies.https://t.co/ZPGVT6aoct

However, with the removal came debate. From the way the action was ordered by the mayor alone, to the fact that, like Oñate, many Santa Feans trace their roots to de Vargas and grow up celebrating him in autumn Fiesta de Santa Fe traditions.

This is where the Don Diego de Vargas statue was.
Votives and the sign, ‘Tewa land.’ pic.twitter.com/BgKPgJVRZQ

Why is Ponce de León protested?

Ponce de León’s arrival resulted in Native slavery, disease, and death, according to Indian County Today. As governor, he enslaved Indigenous people and though unable to defeat Florida’s now-extinct Calusa tribe, his attempts to colonize Florida alerted other Spaniards about the land.

“He was the opening of the door, a microcosm of the invasion of the Americas by the Europeans,” Dr. Jerald Milanich, anthropologist and archaeologist who specializes in Native American culture in Florida, told Indian Country Today. “He was the beginning of the end for hundreds of thousands of Indians.”

Where are (or were) Ponce de León’s statues?

Statues of Ponce de León can be seen in Florida and Puerto Rico — including the cities of San Juan, St. Augustine and Miami.

No word yet on whether these statues will be taken down.

👏…good for them. The statue should be smashed to bits considering you JUST said he killed MANY Native Americans! Vandals Hit Brevard’s Ponce de Leon Statue With Red Paint https://t.co/g3uIvbbUbd

More: Will the Black Lives Matter movement finally put an end to Confederate flags and statues?

Opinion: Confederate statues are ‘billboards for racism.’ Let’s take them down the right way.