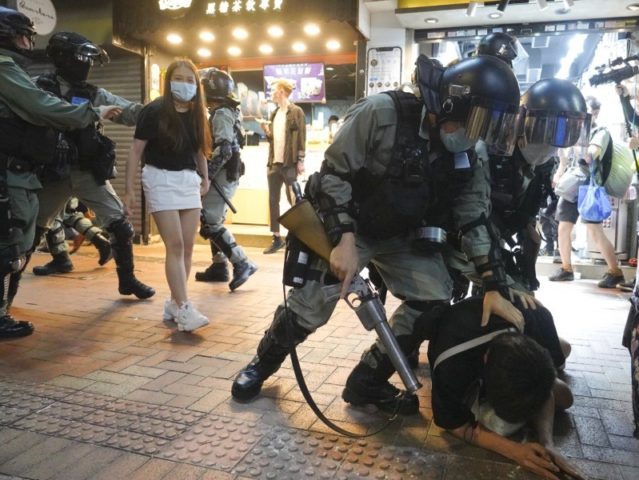 The top membership of the pro-democracy Hong Kong group Demosisto resigned from their positions on Tuesday, triggering the disbanding of the group entirely. A staple in anti-China advocacy in the city for four years, Demosisto’s members expressed reservations at the passing of Beijing’s “national security” law.

The law, which passed in May but was not drafted or enacted until Tuesday, bans “secession,” “foreign interference,” “subversion of state power,” and “terrorism.” Those found guilty face between ten years and life sentences in prison. Opponents say phrases like “subversion of state power” could mean anything, from organizing a protest against a specific policy to defending Hong Kong’s alleged autonomy a bit too vigorously. As American and British flags became staples of the protest movement last year, pro-democracy critics say those images could lead to a “foreign interference” charge.

The law also prescribes punishment for vandalizing public transport and arson, a response to the burning down and destruction of government properties last year in protests against the Communist Party.

The Hong Kong protest movement has attracted millions of supporters since activists began peacefully taking the streets last year in response to a proposed law in Hong Kong’s legislature, the Legislative Council (LegCo), that would have allowed China to extradite anyone present in the city if accused of violating Chinese laws. Under the “One Country, Two Systems” policy, Beijing granted Hong Kong autonomy when it became part of China in 1997, meaning Communist Party laws do not apply there. The “national security” law passed this week, critics contend, is a clear violation of “One Country, Two Systems.” The Communist Party insists that protecting national security is an act of sovereignty and thus national security laws do not violate the policy.

Demosisto, before its demise, described itself as a “pro-democracy youth activist group.” Chinese state propaganda regularly accused its members of seeking independence.

In a statement Tuesday, Joshua Wong, its secretary-general and one of Hong Kong’s most visible pro-democracy activists, resigned from the group entirely.

“A grim fate awaits us … we have to muster our courage. I now announce my resignation as Secretary-General of Demosisto, and at the same time am quitting Demosisto. I will use my personal capacity to practice my convictions,” Wong said in a Facebook post.

“Under such evil law, it is no longer groundless for democratic dissidents to worry about their lives and personal safety,” Wong wrote, adding that he would personally stay in Hong Kong and face the possibility of prison under the “evil law.”

“I will stay to defend my home, Hong Kong, until they silence, obliterate me from this land,” Wong asserted.

Nathan Law, a former lawmaker who helped found the group, and fellow members Jeffrey Ngo and Agnes Chow issued similar resignation statements. Some hours later, Demosisto itself issued a statement from the organization announcing it would cease to exist.

“After much internal deliberation, we have decided to disband and cease all operation as a group given the circumstances,” the statement read.

“Demosisto believes it will be difficult for the group to maintain its current operation … members should use more flexible means to join in protests. [We] now announce to disband immediately on this day and suspend all committee affairs,” the group said.

The Hong Kong National Front, a similar group that openly calls for independence from China, also disbanded on Tuesday. As independence is part of the core philosophy of the group, its beliefs fall into the category of the crime of “secession,” and its continued existence would almost certainly guarantee prison sentences for its members of at least ten years.

Another pro-democracy group, the Civil Human Rights Front, has taken the opposite approach. The Civil Human Rights Front is typically responsible for obtaining permits for pro-democracy protests and this weekend attempted to acquire such a permit for a protest on July 1. Police rejected the request, but the group is calling on protesters to take to the streets, anyway.

“We wish to bring a message of solidarity by collaborating with various councillors from different camps. Citizens must come out on July 1,” Figo Chan, a convener of the group, said on Tuesday. The rallying cry received praise and enthusiasm online, the Hong Kong Free Press (HKFP) reported.

“We can all see that if we accept the national security act and [in] our response [is] that we keep silent, then I will say tomorrow is the last day of Hong Kong too,” Wu told broadcaster RTHK. “I hope people can understand that if you want to keep our core values, if we want to keep the fight to protest against the national security act … we have to protest against it.”

Gene-editing find could point to cures for mitochondrial diseases