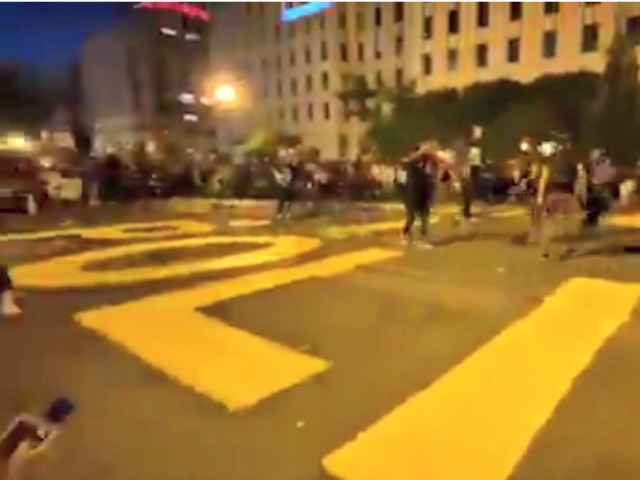 Demonstrators in D.C painted “Defund The Police” on the newly named Black Lives Matter Plaza that leads to the White House.

The yellow-painted words match the huge “Black Lives Matter” slogan painted earlier on the street by the D.C. government.

Justice Protesters are painting “DEFUND THE POLICE” onto the street just a block from the White House.

Democrat legislators are under increasing pressure from their base of far-left groups of college graduates to shrink police powers, despite the huge toll that urban crime inflicts on working-class people who live in urban districts.

The renamed section of the street is part of 16th Street, which leads directly to Lafayette Park, adjacent to the White House.

Happening Now: Black Lives Matter Plaza is getting another street mural, being painted by protestors. It says “Defund The Police” ⁦@nbcwashington⁩ pic.twitter.com/T7bGoTUlws

Some Democrats are resisting the political pressure, largely because they know that any policy to defund police would prompt a police walkout, repeated looting, business shutdowns, and a massive loss of tax revenues.

The Democrats’  lax policy on crime in the 1970s caused huge spikes in murder and theft. The resulting public backlash allowed Ronald Reagan, the former governor of California, to win the presidency in 1980.