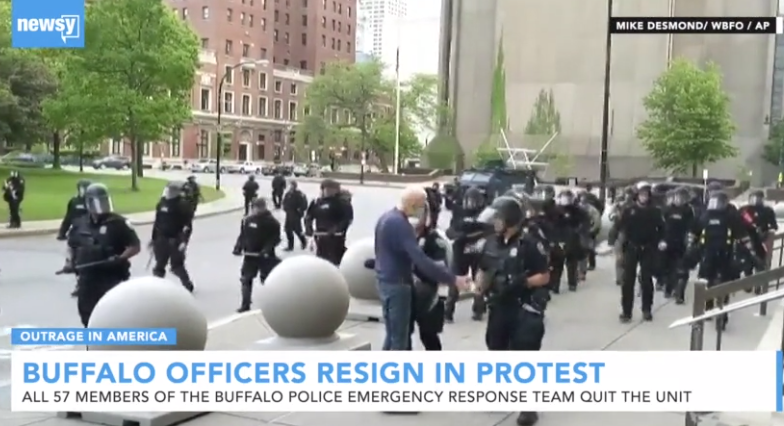 Two Buffalo Police officers were arraigned Saturday on felony assault charges, accused of shoving and injuring a 75-year-old protester Thursday night outside City Hall during one of dozens of protests that have roiled cities across the nation since the death May 25 of George Floyd at the hands of a Minneapolis officer.

The Buffalo officers, part of a contingent in tactical gear ordered to clear Niagara Square after a citywide curfew started, are accused of taking steps that led Martin Gugino to fall backward, striking his head on the sidewalk.

Video taken by a WBFO reporter has been seen on Twitter more than 77 million times.

Officer Aaron Torgalski, who can be seen on the video pushing Gugino before he fell, was charged with felony second-degree assault, as was Robert McCabe, who can be seen about to kneel toward Gugino after the fall before being moved along by a supervisor.

Both officers pleaded not guilty to the charges as part of back-to-back procedures that took place over five minutes online about 11 a.m. before City Judge Craig D. Hannah.

Hannah released the two men without bail and ordered them to reappear July 20 for their next court proceeding.

Erie County Assistant District Attorney John P. Feroleto, chief of the Felony Trials Bureau, did not ask for bail, saying that both officers are longtime county residents without criminal records.

First McCabe, then Torgalski, appeared via Skype for the arraignment. Both were represented by attorney Joseph M. LaTona.

McCabe, 32, a U.S. Army veteran, wore a mask during his arraignment, which lasted about two minutes.

Torgalski, 39, remained out of range of the Skype camera, save for a few wisps of curly black hair.

Buffalo Police Commissioner Byron Lockwood suspended both officers without pay after the Thursday night incident and ordered an internal investigation.

“These last few weeks have obviously been a very challenging time,” Lockwood said in a statement Saturday, “not only for our city and community but for our entire region as we grapple with some very critical issues.

“My officers have been through, and continue to work through, one of the most difficult times in our history. I stand by the men and women of the Buffalo Police Department. I’m proud of how they have handled the vast majority of the situations and encounters that they have faced. I hope and pray that we can all work and grow together as we move forward in the City of Buffalo.”

Erie County District Attorney John Flynn also launched an investigation amid calls by New York Gov. Andrew M. Cuomo and others to do so.

On Friday, all 57 fellow members of the Buffalo Police Department Emergency Response Team team resigned from the unit. Several of its members, along with others from the department ranks, gathered outside Buffalo City Court on Saturday morning in a show of support for Torgalski and McCabe.

Flynn explained after the arraignment that the two officers were charged with felony assault because Gugino, who suffered a head injury in the incident, is older than 65 and the two officers are more than 10 years younger.

Gugino remained in serious but stable condition Saturday at Erie County Medical Center, according to a hospital spokesman.

Officers should have gripped, handcuffed and arrested Gugino if they thought he was committing a crime, Flynn said.

“They’re not trained to shove a 75-year-old man with a baton and knock him to the ground,” he said.

Police Benevolent Association Attorney Thomas H. Burton, who represents Buffalo police in use of force cases including this one, said the case should not be tried outside the legal process.

“As you know, the officers pleaded not guilty, and this case will be tried in a court of law,” Burton said. “It will not be tried in press conferences and shallow internet references.”

Cuomo, during his daily coronavirus briefing on Saturday, praised the way Buffalo Mayor Byron Brown and other leaders in the region have reacted to the matter.

He said he saw the video of the incident, that he thinks there was “criminal liability” in the way the officers treated Gugino and that Flynn was right to file charges against Torgalski and McCabe.

“What we saw was horrendous and disgusting; I believe illegal,” the governor said. “So if there’s something else that I didn’t see, or what I saw was not correct, then tell me. Otherwise, do justice. And that’s what the mayor did and that’s what the DA did. Good for them.”

In response to questions, Cuomo also acknowledged the difficulty officers face in the line of duty, including during protests like the ones that have become common during the last two weeks.

“All of these are difficult situations,” he said, “and I understand that this situation is superheated, it is controversial, people are frightened, people are polarized. There is no path that is going to make everybody happy. … Police have to do their jobs, but they don’t have the right to abuse, to hurt, to use unnecessary force, and (if they do) they’re going to be held accountable.”