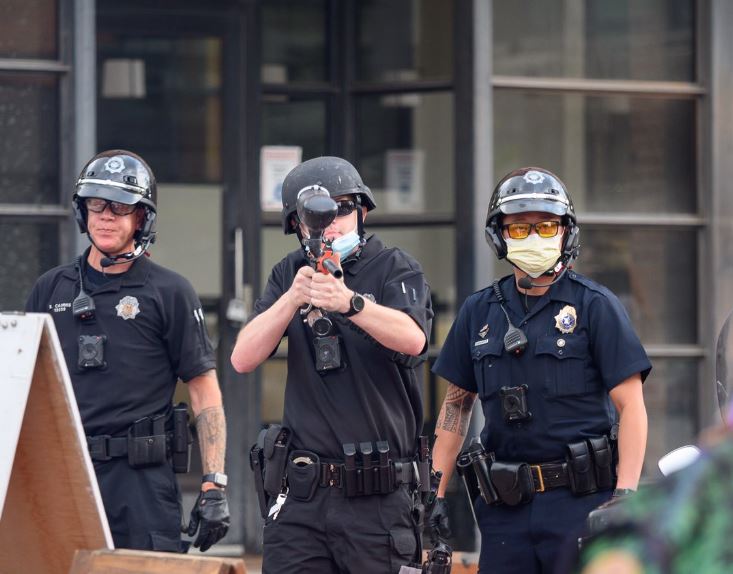 A federal judge in Denver issued an order late Friday night that limits the Denver Police Department’s use of chemical weapons and non-lethal projectiles on protesters, saying that protecting First Amendment rights were more important than protecting buildings.

Jackson issued an 11-page ruling on Friday night after four protesters filed a lawsuit, asking for a temporary restraining order against aggressive police actions. The lawsuit filed Thursday in Denver District Court had been moved to federal court.

“I find that plaintiffs have established a strong likelihood that defendant violated plaintiffs’ First Amendment right to free speech,” Jackson wrote in the ruling.

Police at protests have been ordered by the court “from employing chemical weapons or projectiles of any kind against persons engaging in peaceful protests or demonstrations.”

Jackson said the plaintiffs, in their filing, established that some police officers have been firing indiscriminately at peaceful protesters, including aiming their fire at people’s heads and their groins.

But Jackson recognized that police need the ability to protect themselves, so he set guidelines for when police officers can use the non-lethal weapons against protesters.

For example, a captain or higher-ranked officer must approve their use after that commander has witnessed specific acts of violence or property destruction that warrant that level of force. He forbid police to aim at people’s heads, necks or backs and said police cannot fire indiscriminately into a crowd.

Other measures in the order include:

Non-Denver officers shall not use any demonstration of force or weapon beyond what Denver itself authorizes for its own officers.

Chemical agents or irritants (including pepper spray and tear gas) may only be used after an order to disperse is issued.

Officers must keep body cameras running and may not intentionally obstruct them.

Officers must give orders to disperse, allow protesters time to leave and give them room to move away. If it appears their intended audience cannot hear, officers must repeat the orders before deploying chemical weapons.

In coming to a decision, the court reviewed video evidence of numerous incidents in which officers used pepper spray on demonstrators who were peaceful and were not engaging in violence or destructive behavior, according to the ruling.

“People have an absolute right to demonstrate and protest the actions of governmental officials, including police officers. It is one of the many freedoms on which this country was built,” Jackson said in the ruling.

Jackson, noting that police have a “very difficult and often thankless job” to carry out, said “the difficulty is in trying to draw an enforceable line that permits police officers to use appropriate means to respond to violence and destruction of property without crossing the line into the chilling free speech and abusing those who wish to exercise it.”

Denver police said on Friday night that the department “will comply with the judge’s directions, many of which are already in line with our community-consulted Use of Force Policy.”

Police will seek modifications to the Order “that would account for limitations on staffing and body-worn cameras so the directions can be operationalized.”