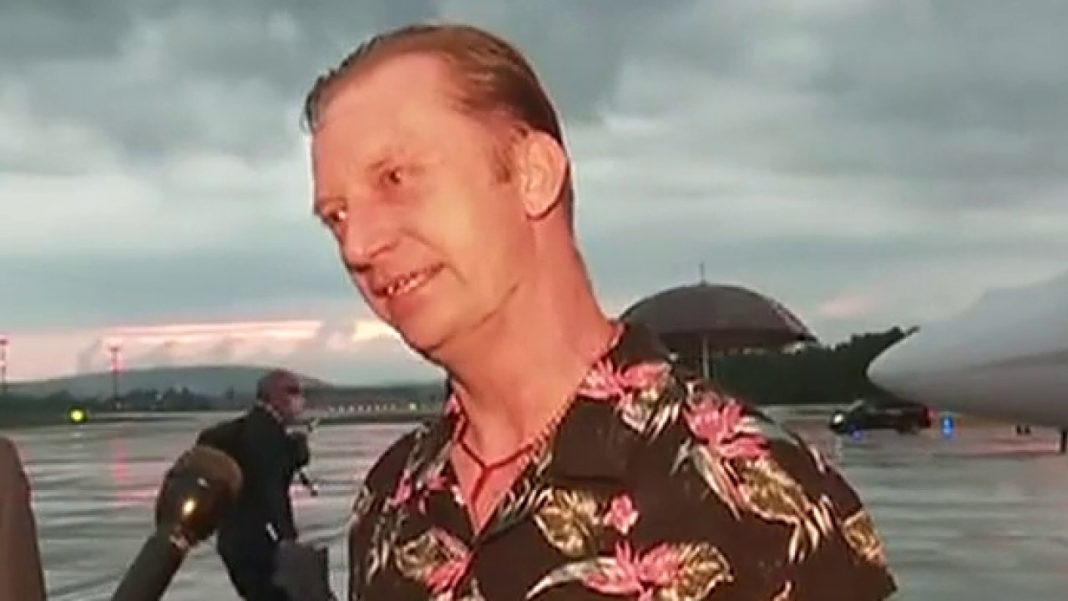 U.S. Navy veteran Michael White arrived back in the U.S. early Friday after his release from Iran following nearly two years of detention.

White, 48, arrived at Dulles International Airport in Virginia, near Washington, on a flight from Zurich, where he had flown for a handover to U.S. authorities after being released by Iranian officials. White told Fox News he slept for a few hours on the trans-Atlantic flight after enjoying a steak dinner.

President Trump welcomed White back to America in a Twitter message early Friday.

“So great to have Michael home. Just arrived,” the president wrote. “Very exciting. Thank you to Iran.”

US NAVY VETERAN DETAINED IN IRAN IS FREED, FOX NEWS ON THE GROUND FOR ZURICH TRANSFER

Relations between the U.S. and Iran have been strained since Trump decided in 2018 the U.S. should withdraw from a nuclear deal that Iran had signed with world powers in 2015, during the Obama administration. Trump has said his goal is to pursue a replacement deal that would better protect U.S. interests.

In a recent development, Secretary of State Mike Pompeo announced last week that the U.S. planned to end all sanction waivers that allowed European, Chinese and Russian companies to work with Iranian nuclear sites despite U.S. sanctions.

The U.S. enacted economic sanctions against Iran in retaliation for its nuclear enrichment activity that resumed after Trump announced withdrawal from the 2015 deal.

White’s return to the U.S. was negotiated as U.S. and Iranian officials continue their dialogue.

A senior U.S. official told Fox News that as part of the deal to free White, the U.S. agreed to release an Iranian-American doctor, Majid Taheri, who served 16 months for violating American sanctions against Iran and was sentenced Thursday to time served.

Taheri has lived in the U.S. for 33 years and is a medical doctor in Florida, the official said.

Fox News was at the scene in Zurich on Thursday when White arrived from Tehran for transfer. The State Department’s Iran envoy Brian Hook completed the transfer and walked White off the plane, into American custody and back into freedom.

Speaking to Fox News exclusively after landing, White expressed his appreciation to the president, whom he spoke to by phone after landing.

“I want to extend my personal thanks to President Trump for his efforts both diplomatically and otherwise,” he said. “He is making America great again and I look forward to what is going to happen here in the future.”

Asked about his health, White said he was “improving” but was sick with COVID-19 while in prison.

“I am recovering pretty decently, getting back into shape,” he said. “I was really in poor shape then. But I am getting a lot better as a result of Swiss Embassy and all of the efforts of the Trump administration.”

White, from Imperial Beach, Calif., had been held in Vakilabad Prison in Mashhad, Iran.

White has said he was visiting his girlfriend in Iran in July 2018 when authorities there arrested him. In March 2019, he was sentenced to 10 years in prison on charges he insulted Iran’s supreme leader and posted private photos on social media.

In March, White, who has battled cancer and other illnesses, was initially released on a medical furlough, but he was still ordered to stay in Iran at the time.

Officials say they’re still working to free other American citizens in Iran like Siamak Namazi, a businessman; his father Baquer Namazi; and Morad Tahbaz, an American environmentalist; as well as secure the remains of former FBI agent Robert Levinson. His family announced in late March that they received intelligence that Levinson had died in Iranian custody.