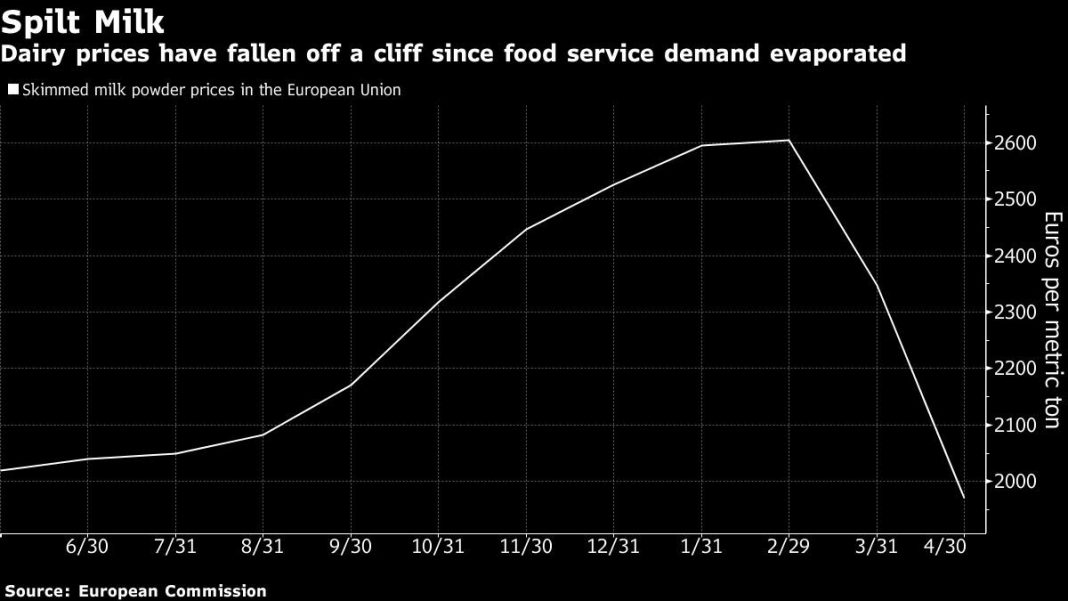 (Bloomberg) — Every year, John Gregson sells his autumn and winter truffles, carefully sourced from places like Italy’s Sibillini mountains and Teruel in eastern Spain, to restaurants for as much as 6,000 pounds ($7,400) a kilo. Not this year.

His biggest restaurant customers brought their shutters down during the coronavirus lockdown, and many may not be raising them anytime soon — if ever. The unprecedented disruption in the food chain, with worst-case estimates showing 80% of restaurants going bust in some parts of the world, is leaving people like Gregson grappling with an industry that may take years to untangle itself.

“Those orders came mostly from Michelin-star restaurants,” said Gregson​, head of U.K. wholesale deals at TruffleHunter Ltd. “It’s now a question of whether those restaurants will be around come autumn and winter when those truffles come into season.”

From truffles to cheeses and steaks to seafood, the providers of ingredients that go into everything from a pasta al tartufo to a London broil are confronting an existential crisis in the $3.4 trillion global food services industry. With demand evaporating almost overnight, suppliers have been forced to bin their produce or transform. Many now face the quandary of whether to hold out for a post-lockdown recovery or to move to a new business model, and perhaps even a new produce.

While images of farmers dumping milk, yellow squash and zucchinis have made their rounds across the globe, many suppliers are trying to find alternative buyers for their perishable produce. One thing is becoming clear: It may be a long while before they can command the premium prices high-end restaurants paid.

Anywhere between 25% to 80% of U.S. restaurants will go out of business due to the pandemic quarantine, estimates show. Similarly grim projections are also being made around the world.

“What you sell into restaurants is different to what you sell into grocers — there are premium cuts, there are expensive lobsters and all of that,” said Nicholas Fereday, a consumer goods senior analyst at Rabobank in New York. “Finding markets for that will be a challenge in the same volume, because it’s going to be a gradual return to restaurants.”

Gregson said his company is pivoting to direct-to-consumer sales — which tend to be skewed toward processed products such as truffle oils and butters — as locked-down households look for ways to jazz up their homemade risottos.

Some restaurant owners are already testing ways to start opening their doors again. Cabotte, a sommelier-owned restaurant popular among London’s financial circles, is hoping to reopen with a socially distanced dine-in experience in September, but expects to also diversify with both takeaway services and cooking sessions at nearby offices.

Still, drastically reduced table counts will make profitability hard in a sector already known for its sliver-thin margins. That will mean simplified menus with just core offerings, according to Will Beckett, the co-founder of steakhouse group Hawksmoor.

“Things that miss out will either be high-wastage, low-sales dishes or things that involve complicated movement around the kitchen,” said Beckett, who expects to reduce his menu’s offering of fish and less popular main courses. “It doesn’t matter if we have four steaks or six steaks — there’s still only one person on the grill — but maybe anything that involves a second person standing in the larder section. That’s going to have to change.”

Even if a restaurant can survive with small customer numbers, there’s a chance some of their favorite producers didn’t — or that they’ve diversified to other, less restaurant-orientated products.

“Some restaurant owners are going to be forced to reinvent their profession and find new ways of expressing themselves,” said Eric Briffard, culinary arts program director at Le Cordon Bleu in Paris. “Good cuisine goes hand in hand with good products, but products will be in decline.”

Artisan producers, who tend to be beyond the reach of most retail customers, are particularly vulnerable since they cannot easily divert supplies to grocers. The U.K.’s Specialist Cheesemakers Association estimates around a third of its members’ produce ends up in restaurants.

The lockdowns have led to tons of premium cheese going to waste, with soft cheeses that have short shelf-lives not surviving sales disruptions. Catherine Mead of Lynher Dairy — a maker of specialty cheeses in Truro, England — donated a quarter of her stock to charities, with another being sent to be ground into powder for cheese-flavored potato chips.

Where demand has endured, it’s skewed to more well-known varieties such as hard cheddars, with niche produce typically favored by restaurants struggling to find a home. For Mead, that means a reliance on her showpiece yarg cheeses to drive sales, which she’s now producing more of at the expense of less established recipes such as kern and stithians.

It’s not just upmarket dairy products that face disruption: the sector as a whole is hugely reliant on the food service trade. Nowhere is this more evident than in the U.S., where around half of both cheese and butter goes to the food service sector.

Restaurant closures initially resulted in widespread dumping of milk, but as dairy farmers responded by cutting output, the U.S. Department of Agriculture stepped in to buy and some states started reopening, cheese prices started surging again, said Mary Ledman, a global dairy strategist at Rabobank. CME spot block cheddar cheese prices tumbled from $1.80 a pound in mid-March to about $1 in mid-April and have now rebounded to over $2.

“This is the largest price volatility I’ve seen in my more than 30-year career,” she said.

Growers of staples like vegetables have had to rapidly alter their businesses. Natoora, a fresh produce company, noted a drop in the sales of fresh peas. “People are less keen on podding them and restaurants had a massive appreciation for the pea in a pod and used to buy these by the box load,” said spokeswoman Poppy Royds.

Sean O’Neill, founder of the Good Earth Growers group in Cornwall, England, saw 95% of his business supplying baby vegetables and salads to restaurants disappear overnight. That’s made him dig up and replant much of his crops with produce better suited to retail customers: out go the micro greens and edible flowers sought after by chefs such as Heston Blumenthal, and in come larger conventional vegetables such as beetroots and carrots.

Despite the upheaval, O’Neill is hopeful that the lockdown will lead to a change in consumer food habits, favoring organic producers like him.

“There is a creative opportunity for transformation for all of us,” he said. “It’s going to be interesting what dishes and flavors emerge, what new collaborations, what new ideas come out of it.”