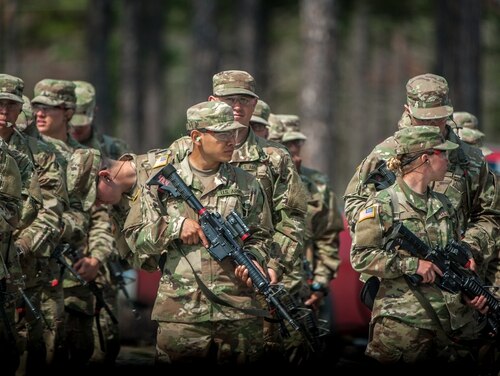 The general helming Army Recruiting Command is preparing a massive virtual hiring event this summer after the Army’s 245th birthday on June 14. Like the other military branches, the ground service is fighting the anticipated dent to manpower after the coronavirus shuttered recruiting stations across the country this spring.

The push will involve “every person” and “every aspect”of the service that Army recruiting commander Maj. Gen. Frank M. Muth can muster, he said during a telephone call on Wednesday.

An intensive event between June 30 and July 2 will tap senior leaders to visit with city councils, nonprofits, educators and other pillars of local communities — a supercharged version of the program that the Army Chief of Public Affairs already runs, which brings Army generals back to their hometowns to engage with civilians able to influence young people.

“We would do the same thing, but it would end up being on Zoom or [Microsoft] Teams,” said Muth. “The secretary is from Chicago, maybe he engages with the Chicago leadership, and the 101st commander goes down to Nashville because he’s right there. And the 82nd commander goes and he Zooms with Raleigh. There’s all these different ways we can use these folks.”

Muth pitched the idea two weeks ago to the Army’s service secretary and chief of staff, calling it Army National Hiring Days. It will be limited in certain areas based on where shelter-in-place orders are still in effect. But Muth intends for it to be a never-before-seen recruiting drive regardless.

“Every person in the Army is involved. Every asset is involved. Everyone is on message,” Muth added. “We are engaging in the ‘Focus 22’ and we’re driving our message for people to either go into the recruiting stations or go to GoArmy.com.”

Focus 22 is in reference to the 22 American cities, like Chicago, Seattle and Los Angeles, with large populations of Generation Z youths who Army leaders say have had minimal exposure to the service as a potential path in life.

Sign up for the Army Times Daily News Roundup

By giving us your email, you are opting in to the Army Times Daily News Roundup.

Army recruiters were doing fairly well late last year and early this spring in sourcing candidates for service. By March, they had signed up 2,200 more recruits than they had by the same time last year. But the pandemic dampened their efforts as brick-and-mortar stations shuttered and the recruiting enterprise was forced to move completely online.

Right now, the service is about 4,000 contracts short of where it wants be.

“It’s more than we were last year, but at the same time, historically, we’ve had a year where we were behind that much too,” said Muth, adding that had his recruiters “not been in a position to virtually recruit,” they would have done “about zero” new contracts over the past few months.

Perhaps an early indicator that confidence in the civilian job market is dropping is the fact that Army retention is roughly 15 percent higher than expected, thanks in part to short-term reenlistment contracts, according to E. Casey Wardynski, the Army’s assistant secretary for manpower and reserve affairs. Wardynski said this week that he still expects the service to meet its targeted end-strength number of 485,000 soldiers.

The Army National Hiring Days event could also “give a good indication” of how the economy will impact recruiting later in the year, according to Muth.

“I don’t know if we’ve seen the upturn yet of what we’d normally get” during times of high unemployment, said Muth. “What I would tell you is, I think we’ll … have an indication by mid-July, beginning of August if things really start to change.”

Muth’s intent is to get as many general officers and command sergeants major as he can to participate. As part of an opening salvo on June 14, he’s also looking to potentially use the Army Golden Knights parachute team and the Fife and Drum Corps, as well as the Army’s legacy divisions.

“That’s kicking off on June 14, but between now and then is our shaping operation. We’re now starting to message out; we’re starting to dominate the digital space,” Muth said.

Recent Army advertising campaigns have tried to emphasize a different side of the service, with less focus on combat roles. A commercial released last month, and another this month, focus on the Army’s role staffing hospitals and building ad-hoc medical facilities during the coronavirus pandemic.

“Everyone sees us as all armor and infantry and artillery and aviation, which is true, but that’s only 15-20 percent of the Army. A larger portion is the tech, and the help, and the engineers and the logistics,” Muth added. “People didn’t realize that.”