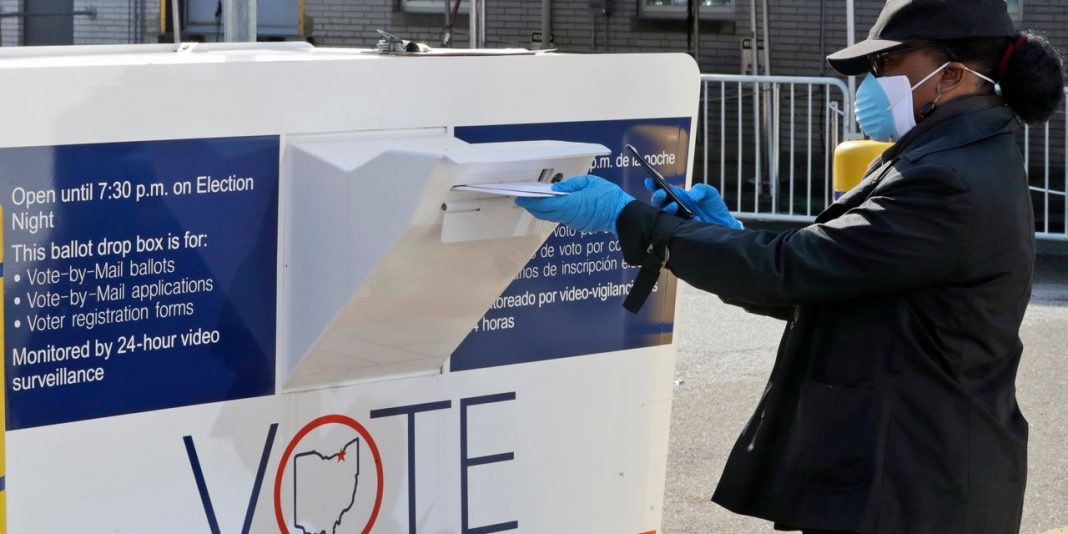 Roughly 100 million Americans voted in the flesh during the 2016 elections, mingling at 117,000 polling places with 918,000 staff, many of whom were seniors. Given how fast Covid-19 has spread without this kind of national mixer, it’s easy to see why an epidemiologist might dread November.

California Governor Gavin Newsom signed an order this month ensuring that every registered voter in his state will receive a mail-in ballot this fall. Michigan Secretary of State Jocelyn Benson said Tuesday that every voter there will be sent an application to cast a ballot by mail. Other states will probably expand their absentee options. This is understandable in a pandemic, but it’s worth keeping in mind what can go wrong.

In 2016 almost a quarter of votes were carried by the post, according to the federal Election Assistance Commission. But roughly 1% of submitted absentee ballots were rejected. About half of the time, the voter’s signature was missing or didn’t match the John Hancock on file. Another quarter of these ballots arrived after the deadline. All in all, 319,000 votes were thrown out.

Black and Hispanic mail voters in Florida had rejection rates in 2018 that were twice as high: 2% and 2.1%, compared with 0.9% for whites, according to a study by the state chapter of the American Civil Liberties Union. In several counties the minority rejection rates passed 3% or 4%. Among first-time voters, 3.1% of ballots were thrown out. That call is often made by local officials, who are simply eyeballing the voter’s signature against the version on record.

Some states allow voters to “cure” a signature mismatch after Election Day. In Ohio they have seven days to fix the issue. It’s eight days in Colorado and 14 in Illinois. North Carolina says mail ballots are valid if they arrive three days after Election Day, provided their postmarks beat the deadline. It’s six days in Iowa and 10 in Ohio.

In 27 states, “a voter can designate someone to return their ballot,” says the National Conference of State Legislatures. This practice is often restricted to family members and caregivers, or with rules that cap the number of ballots any single person may return. Not always. “Ballot harvesting” has made news in California, where activists have canvassed neighborhoods collecting votes. The registrar in Orange County reported in 2018 that his office had “people dropping off maybe 100 or 200 ballots.”

Ballot harvesting isn’t widespread, but laws in 13 states are “silent on the issue,” the NCSL says. That includes Wisconsin, where the Elections Commission told voters in March that ballots may be returned by “a family member or another person.” Technically, that covers anybody at the door in a Biden shirt or a Trump hat. Last year when the commission flagged the issue, it said Wisconsin law also doesn’t “clearly prohibit failing or refusing to deliver a marked ballot collected from another voter.”

So imagine: It’s Nov. 4, 2020. Swarms of people have voted by mail for the first time, many of them incorrectly. State election officials are struggling to keep up with the deluge. The presidential race is tight, with Donald Trump or Joe Biden (pick your poison) leading nationally by 500,000, similar to the popular vote in 2000. But something like a million mail-in ballots have been thrown out.

The Electoral College comes down to Ohio and Wisconsin, where the contenders are separated by several thousand votes. For 10 days, late ballots keep being counted in Ohio. As voters race to fix bad signatures, it sets off a scramble of challenges and counter-challenges. Mr. Biden files a lawsuit pointing to higher rates of ballot rejection in areas with more black voters. Mr. Trump accuses Democratic activists in Wisconsin of mass ballot harvesting. Maybe a canvasser in Milwaukee finds a box of votes in his trunk that he—whoops—forgot to deliver.

The worst of this nightmare can be avoided. As states extend mail voting, they should tighten deadlines and ban ballot harvesting. The push for all-mail voting is relentlessly focused on ballot access, which is important. But ensuring ballot integrity is crucial for public confidence in election outcomes and, ultimately, for democratic legitimacy.

Democrats in Congress want to go the other direction. The Heroes Act, passed by the House this month, would mandate the counting of late ballots postmarked before Election Day, with a uniform 10 days to cure bad signatures. The bill also says that states “shall permit a voter to designate any person to return a voted and sealed absentee ballot,” on the sole condition that canvassers not be paid per vote. In effect it would impose ballot harvesting nationwide.

At best, mass mail voting is a roll of the dice, calculated against the grim reality of the pandemic. If the country is lucky, the 2020 election, whoever wins, won’t be decided by a whisker. Then as the coronavirus is tamed, the temporary measures should end. For ballot security and democratic legitimacy, it’s hard to beat going to the polls on Election Day.

Out of the house: Biden makes first public campaign stop in weeks

Pulling dollar bills off the wall to keep going in rural...