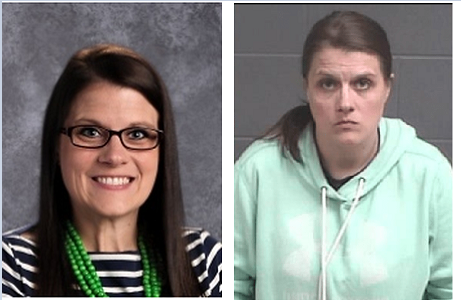 A teacher in Wisconsin was arrested for sleeping with a foster son and former student, who just so happened to be decades younger than her.

The 36-year-old teacher, Stephanie Pudlowski, had initially met the teen while teaching at James Williams Middle School, took the lad in as a foster in 2019.

The two carried on a sexual relationship, and were eventually caught after he suspicious husband set up hidden cameras to uncover the infidelity.

According to the Daily Mail, the husband has since filed for divorce, and Pudlowski has resigned from her teaching position.

Pudlowski was taken in by authorities and charged with sexual assault of a child placed in substitute care, sexual intercourse with a child age 16 or older and causing mental harm to a child.

The sexual activity between the teen and Pudlowski often took place in the basement, which served as the boy’s bedroom. Due to his “loud” gaming habits, the two managed to get away with the tryst for several months.

Pudlowski was released on $5,000 bond, and is scheduled to appear in court on June 15.

“Do you know who my boyfriend is?” Aaron Judge’s girlfriend has words for officers during DUI arrest

Oil is on track for its best month ever after rebound,...

‘How Does the Government Determine What Is Essential for You to...

Boys let black widow bite them in hopes of turning into...