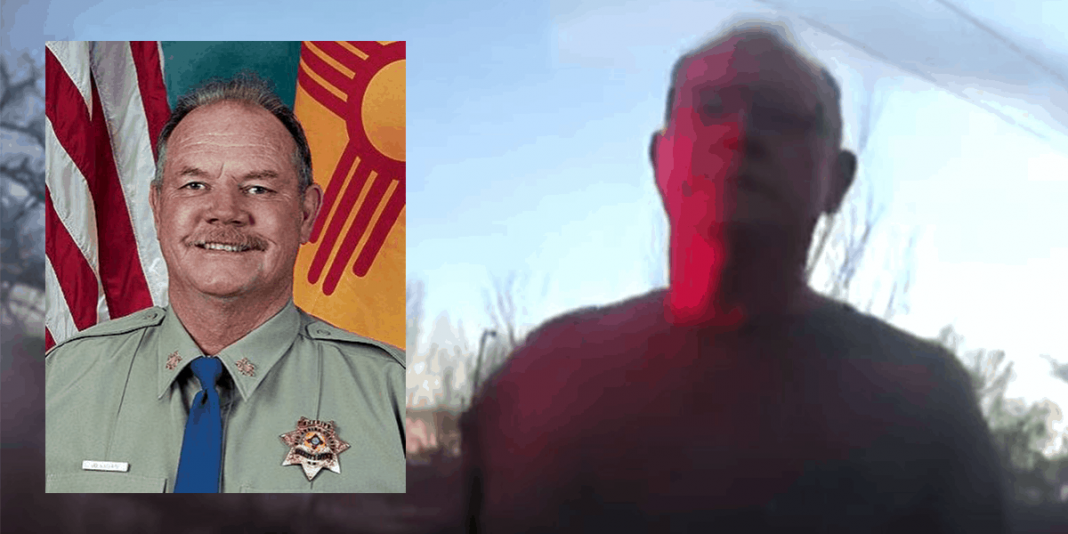 Rio Arriba County Sheriff James Lujan was arrested Thursday morning for refusing to comply with a search warrant in relation to an earlier charge of obstructing an investigation in March.

Just after 8 a.m., officers from the Española Police Department and a Taos County Sheriff’s Office tactical unit gave Lujan a search warrant for one of his cellphones, to which the embattled sheriff refused to comply.

Officers had originally decided only to detain Lujan while they retrieved the cellphone, but arrested him when he refused to give the password so detectives could open the phone.

“Because of his actions in choosing to resist, evade and obstruct our officers, that’s why he was arrested,” Española Police Sgt. Jeremy Apodaca said.

Lujan also became “physically resistant” and attempted to pull away from the officers arresting him, Apodaca said. Lujan has been charged with two counts of resisting or obstructing an officer.

The warrant stems from a March 21 incident where Lujan arrived at the scene of a SWAT standoff in plainclothes, allegedly drunk, and attempted to insert himself in the situation.

That incident took place at the home of former city councilor Phillip Chacon, upon whom Española police were attempting to issue an arrest warrant following a stabbing incident. Lujan showed up and told Española interim police chief Roger Jimenez that he had been communicating with Chacon.

Lujan also told officers at the scene that they needed to leave and he would arrest Chacon, a tense interaction captured on officers’ lapel cameras.

“I’m not asking you, I’m telling you (to leave),” Lujan said to officers.

Officers then attempted to serve a warrant May 12 for the cellphone of Española City Councilor John Ramon Vigil, who had communicated with Chacon.

The complaint states soon after officers arrived, Lujan and Undersheriff Martin Trujillo arrived at the scene, despite not being called in. Lujan also used the phone subject to the warrant to call Vigil’s lawyer for him.

“Detective Saucedo and Detective Wright both advised me that Sheriff Lujan intimidated them specifically because of the previous incident,” Jimenez wrote, adding that Lujan was once again obstructing officers.

Two days later, Lujan reluctantly turned over both his personal and department-issued cellphones in compliance with an order from a magistrate judge. Lapel footage shows Lujan refusing to give his phones for the first 20 minutes, then appearing to attempt to leave out a separate door before finally complying.

Jimenez wrote that after reviewing lapel footage of the standoff, he realized Lujan never relinquished the white iPhone used to call Chacon during the March SWAT standoff and requested another warrant for the third phone.

Apodaca said Lujan’s actions during previous encounters prompted the department to request the assistance of the Taos County Sheriff’s Office on Thursday’s warrant.

Reeb said in a Thursday phone conversation the two new obstruction charges could be added to the criminal complaint.

Balderas sent an email to Reeb Thursday granting her the authority to prosecute any charges stemming from Lujan’s refusal to comply.

“No one is above the law, but all enforcement officials must work together to keep their communities safe, while ensuring justice and due process for all New Mexicans,” Balderas said in a written statement to the Journal.

Lujan spent the night at the Los Alamos County Detention Center and has an arraignment set for 9:30 a.m. Friday.