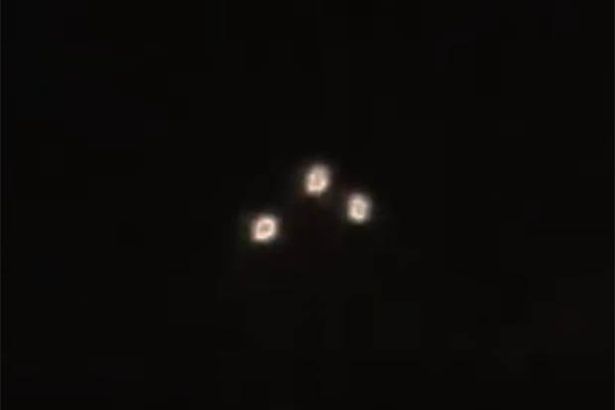 A collection of bright lights hovering in a triangle-shaped formation have been spotted above Texas in the latest sighting of mystery objects seen in the skies over the US.

Over the past few months, videos across a number of states in the country have emerged showing apparent UFOs appearing.

Texas has had three sightings already this year, with many of the clips showing the objects in a triangular shape.

And now, a new video from the town of Tomball has emerged showing one of the clearest sightings yet.

They start to vanish from sight but then, almost immediately, come back into view.

“Oh my God,” a woman behind the camera can be heard exclaiming. “What is that?”

The video was shared to YouTube on April 22 by user willease.

He explained: “This was directly above our town of Tomball, Texas.

“There were about 15 other individuals who were recording along with us. What do you think?”

If you’re unable to see the survey, click here

It is not clear what the lights are but previous so-called sightings have often been dismissed as Chinese lanterns, kites or drones.

Sue Gough, a spokesperson for the Department of Defense, said: “DOD is releasing the videos in order to clear up any misconceptions by the public on whether or not the footage that has been circulating was real, or whether or not there is more to the videos.

“The aerial phenomena observed in the videos remain characterized as ‘unidentified