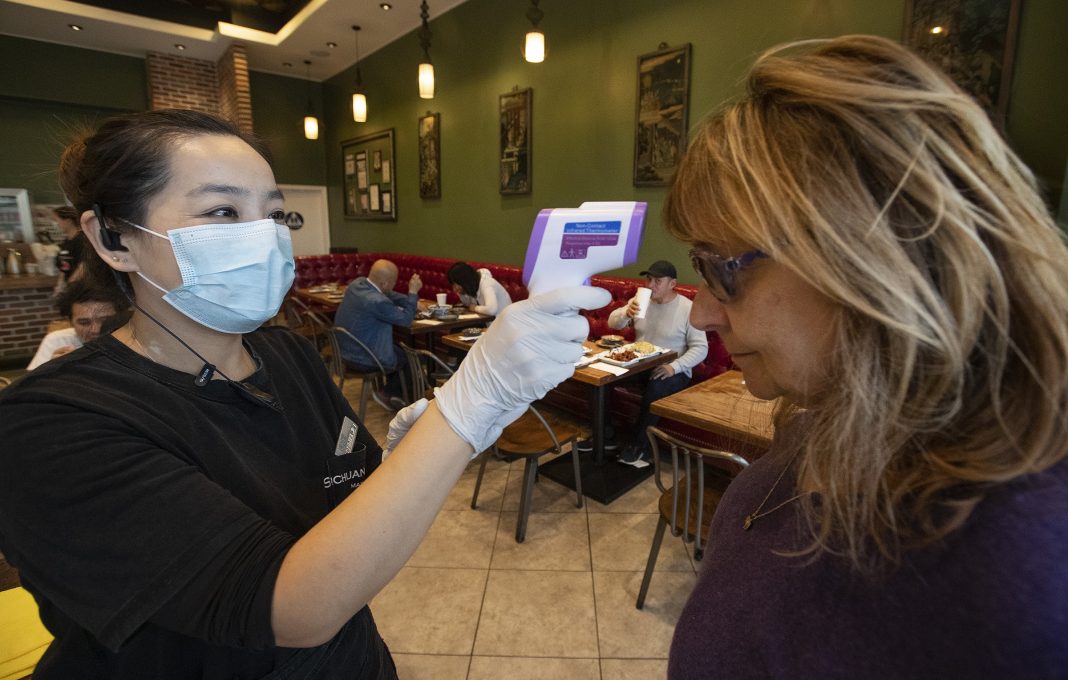 Customer Deanna Arthur of Alhambra has her temperature taken by Sophia Huang, a supervisor at Sichuan Impression restaurant in Alhambra.

The nation’s largest employers are turning to thermometers as a new line of defense against the coronavirus.

At Walmart and Amazon facilities across the country, hundreds of thousands of employees will soon get their temperature taken when they report to work. Home Depot is giving its employees thermometers and asking them to check for a fever at home. Starbucks is sending thermometers to stores to allow employees to do voluntary self-monitoring. And grocery delivery company Instacart is distributing a health and safety kit to its contract workers, including a reusable cloth face mask, hand sanitizer and thermometer.

In the U.S., the pandemic’s outlook has become more dire. There are at least 278,458 confirmed cases of COVID-19, according to data compiled by Johns Hopkins University. On Tuesday, White House officials projected there would be between 100,000 and 240,000 deaths in the U.S.

Grocers and essential retailers have changed the way they operate and added more safety precautions, from handing out hand sanitizer to installing plexiglass screens. They have been criticized, in some cases, by workers who say they’re not doing enough. And the companies have been directly affected by the pandemic, too, as some of their own employees have gotten sick, and they’ve had to close and clean warehouses and stores.

Their decision to add temperature screenings — one of the most extensive and invasive measures rolled out by U.S. employers — reflects the growing severity and rising death toll.

Medical professionals and health experts, however, warn temperature checks are an imperfect tool. They say  employers must couple the screenings with other measures, such as providing masks, encouraging employees to keep a distance from one another and monitoring workers for other symptoms.

“What they’re doing is a step in the right direction but it’s just a step,” said Sharona Hoffman, a health law expert who teaches law and bioethics at Case Western Reserve University. “It’s not a comprehensive safeguard.”

The Centers for Disease Control and Prevention has not issued guidance on employee screening.

The U.S. Equal Employment Opportunity Commission issued guidance in mid-March, saying it is legal for companies to ask employees if they have symptoms of COVID-19, such as a cough or shortness of breath, and take their temperature. It warned, however, that “employers should be aware that some people with COVID-19 do not have a fever.”

Walmart, which has 1.5 million employees in the U.S., said it will take up to three weeks to roll out the temperature screening to all facilities. It said it will start the temperature checks first at distribution centers and prioritize coronavirus hotspots, such as New York and Louisiana.

Walmart’s executive vice president of corporate affairs Dan Bartlett said the mandatory screenings are designed for employees’ “own public health and for the public health of our customers.”

“I think most will see this as a welcome relief that we’re doing it for them,” he said on a Tuesday call.

Companies are taking different approaches with temperature screenings. At Walmart and Amazon, the temperature checks will be on-site.

Walmart is sending infrared thermometers to all facilities. Designated managers trained in federal health privacy laws will take employees’ temperatures. They will send employees home if they have a temperature of 100.0 degrees or higher. Those employees will not be able to return to work until they’re fever-free for at least three days.

Bartlett said the company is encouraging employees to check their temperatures at home until screenings start at their facility. Along with taking temperatures, the company will do a basic health screening of employees, such as asking about travel, exposure or other symptoms, such as coughing or feeling achy.

At Amazon, temperature checks will be rolled out to all U.S. and European facilities, including warehouses and Whole Foods grocery stores, by early next week. The company said it’s already started them at some U.S. sites. Employees who have a temperature that’s higher than 100.4 degrees will be sent home and asked to stay home until they’re fever free for three days.

B.J.’s Wholesale Club said that over the coming weeks, it will begin checking temperatures of all employees at its 218 stores when they report to work. All employees will enter through a designated entrance where the company will check their temperatures. The company said in a news release that it will also start providing masks and gloves for employees who want to wear them.

At Home Depot, the approach is different. Employees are receiving a company-provided thermometer to hold up to their forehead. If they have a fever — particularly of 100.4 or higher, the CDC’s cutoff — they’re asked to stay home, company spokeswoman Sara Gorman said.

Starbucks is sending thermometers to all company-operated stores for employees who would like to “self-monitor their temperature as added reassurance before they start their shift,” Rossann Williams, the chain’s executive vice president of the U.S. company-operated business and Canada, wrote in a letter to employees Wednesday. She said the temperature checks are voluntary.

All of the retailers have encouraged employees who don’t feel well to stay home, too, by adding or expanding their paid time off policies.

Walmart and Amazon also said this week that they will provide masks for employees, who can choose whether to wear them.

‘False security’ or ‘Better than nothing’?

Medical professionals have warned about the limits of temperature checks — particularly since the coronavirus can silently spread.

The director of the CDC, Dr. Robert Redfield, said in a National Public Radio interview broadcast on Tuesday that as many as 25% of people infected with COVID-19 may not show any symptoms. Some studies have indicated that percentage could be even higher.

Dr. Ghazala Sharieff, chief medical officer at San Diego-based Scripps Health, said some have urged her hospital system to screen doctors, nurses and other employees with temperature checks. She said she’s opposed to the tool because it can be inaccurate from a distance and create “false security.”

“Any medical person will tell you that’s actually not a great screening,” she said. “If you just pop some Advil or Tylenol, you can get through the screen because you want to come to work.”

Instead, she recommends employers and employees look out for one another and watch for possible signs and symptoms. “You see somebody coughing, you ought to tell somebody and go home,” she said. “More of that kind of relationship is more important.”

Dr. David Hindin, a general surgeon and an academic fellow at Stanford University who studies health technology innovation, acknowledged the temperature screenings can be faulty. Some patients, for example, don’t spike a fever right away — or never do.

Still, he said “it’s better than nothing” for essential workers who must continue to commute and interact with others. He recommended employers couple temperature checks with screening for other symptoms, such as asking employees if they have a cough or fatigue.

He said he’s opposed to using temperature checks to justify the reopening of nonessential businesses, such as movie theaters or restaurants.

“If they’re using that as a decision point to open up earlier, then I don’t think it holds as much water,” he said.

In the U.S., the temperature checks are used at medical facilities or drive-thru testing locations to screen patients and determine if they should get a nasal swab.

In other parts of the world, health officials have used temperature checks much more widely to detect the coronavirus among the general public and slow its spread.

In Singapore and other parts of Asia, people have been screened for a fever before getting on a train or bus or going out to places like movies, coffee shops or restaurants. In China, police officers knocked on doors to check temperatures — and if they detected a fever, people were sent to a fever clinic for further screening.

Dr. Anthony Fauci, director of the National Institute of Allergy and Infectious Diseases, told The New York Times he takes his temperature every day and gets it checked a few more times — along with other White House officials — before press conferences and meetings.

Fauci said in a March interview with Science magazine that the U.S. should consider taking people’s temperature outside of supermarkets, such as China did. “The rationale for doing it is at least worth serious consideration,” he said.

But so far, that aggressive approach has been largely rejected in the U.S.

Some businesses are looking to no-touch thermometers as a way to make customers feel safe, as they look to reopen doors and get back to business.

AMC Entertainment CEO Adam Aron said he hopes movie theaters will open by mid-June. In an interview Tuesday with CNBC’s “Squawk Alley,” he said the company is looking at stricter cleaning procedures and temperature-reading machines.

At Walmart, Bartlett said the retailer would look to state or federal government officials, if it ever considered screening customers outside of the doors of its store.

“That’s a public policy threshold that would require elected officials to give clear guidance to private sector operators to extend it beyond just their own workforce,” he said. “That’s not for us to solve, in my opinion. That’s something that we would have to be given clear guidance from the government.”

Hoffman, who teaches at Case Western, said concert venues, stadiums and movie theaters already screen customers for safety reasons. For example, she said, some check purses or backpacks for weapons.

In the future, she said, Americans may favor the screenings as they try to return to their normal routines and look for something that will make them feel at ease.

“If we do have 100,000 deaths and a million people infected, I think people will be clamoring for reassurance,” she said. “It just depends on how bad things get to be, how panicked people are — though we are a country that doesn’t like anybody to tell us what to do.”