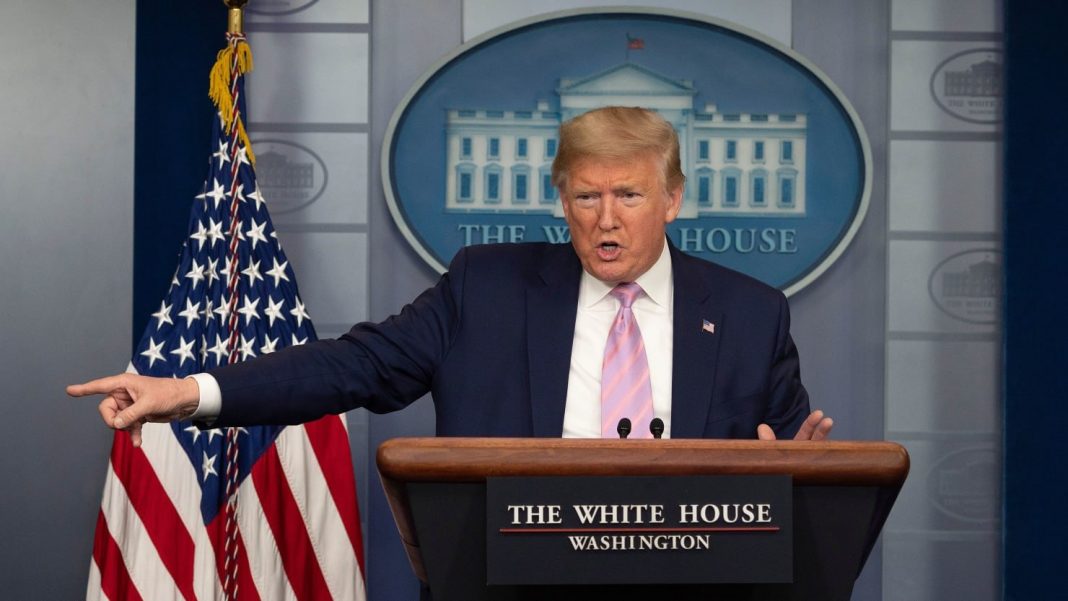 President Donald Trump on Saturday spent much of his daily press briefing on the coronavirus raging against perceived enemies, from the media, to the Ukraine whistleblower, to the recently ousted commander of a Navy aircraft carrier.

On the same day the U.S. death toll from the COVID-19 pandemic surpassed 8,000, Trump opened the briefing with a slam at the media, which he accused of “spreading false rumors.”

“Get this over with, then go back to your fake news,” Trump said.

While acknowledging that the nation will likely see “a lot of death” in the coming weeks, the president repeatedly reiterated his calls for the country to “get back to work” and ease up on protective restrictions.

And then he let loose on critics.

Asked about his Friday night firing of intelligence community inspector general Michael Atkinson, who notified Congress of the whistleblower complaint that ultimately led to his impeachment, Trump slammed both Atkinson and the whistleblower.

“Frankly, somebody oughta sue his ass off,” the president said of the anonymous intelligence whistleblower, adding that Atkinson, a Trump appointee, “did a terrible job.”

Trump also slammed Captain Brett Crozier, who was relieved of his duty commanding the USS Theodore Roosevelt after writing a letter warning about the spread of the coronavirus on his ship. While Crozier’s warnings were dismissed and his pleas for help to Navy leadership were met with punishment, more men on his ship wound up testing positive for the virus, with 137 cases as of Saturday.

In addition to backing the Navy’s decision to ax Crozier, Trump appeared to mock him for daring to sound the alarm about the virus.

“I thought it looked terrible what he did, to write a letter,” Trump said. “This is not a class on literature.”

He went on to take aim at the governors of states that have been hit hard by the coronavirus, claiming without evidence that the states were asking for more equipment than they needed. Trump singled out New York Gov. Andrew Cuomo, claiming that the estimates that New York will need 40,000 ventilators were overestimates.

While Trump won praise from some of his critics earlier this week for appearing to finally grasp the severity of the pandemic, on Saturday he once again seemed to buck expert advice by suggesting certain protective restrictions could soon be loosened.

Speaking about Easter Sunday—the “beautiful” date by which he had earlier suggested things could go back to normal—he mused about churches possibly holding special services with social distancing in mind.

“We have to get this country open. This country was not designed to be closed…we’re paying people to stay home…and they want to go to work.”

Trump also promoted hydroxychloroquine, the drug that’s become key to the Trump administration’s coronavirus response even though the FDA hasn’t approved its use against the virus.

“I may take it,” Trump said. “I have to ask my doctors about that.”

On Friday, President Trump announced a new CDC recommendation that Americans wear cloth or fabric face masks in public to help prevent the spread of the deadly coronavirus, but bizarrely said that he wouldn’t bother to wear one himself.