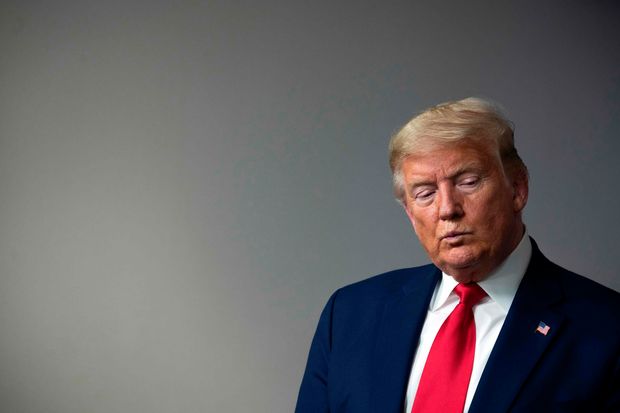 WASHINGTON—President Trump said he agreed with the Navy’s decision to fire Capt. Brett Crozier, the commanding officer of the USS Theodore Roosevelt, after a memo in which the captain pleaded for help with a coronavirus outbreak at sea leaked to the media.

The president said Saturday that it was inappropriate for Capt. Crozier to write the four-page memo in which he demanded that superiors allow him to take the carrier to the port in Guam to offload sailors stricken with Covid-19, the pneumonialike disease caused by the virus. As of Friday, 132 of the ship’s sailors had tested positive.

“I thought it was terrible, what he did. To write a letter? I mean, this isn’t a class on literature,” Mr. Trump said during a White House news conference. “This is a captain of a massive ship that’s nuclear-powered and he shouldn’t be talking that way in a letter. He could call and ask and suggest.”

The president also said sailors shouldn’t have left the ship to stay in Vietnam. While officials don’t know for certain how the virus came onto the ship, roughly 30 sailors had stayed at a hotel during a port visit in Vietnam earlier in March.

“Perhaps you don’t do that in the middle of a pandemic or something that looks like it was going to be. History would say you don’t necessarily stop and let your sailors get off,” Mr. Trump said.

The president said he supports the decision to relieve Capt. Crozier, but wasn’t involved in it.

The USS Theodore Roosevelt’s crew have stood behind Capt. Crozier, with videos posted on social media on Friday showing sailors cheering him as the captain disembarked the ship.

After the decision to relieve Capt. Crozier was announced, some sailors in the U.S. Navy reacted by telling friends they might not re-enlist because they saw the move as a sign of inadequate leadership concern for their safety, according to enlisted personnel.

Mr. Trump declined to directly address a question about whether he was worried the decision to fire Capt. Crozier could result in some sailors declining to re-enlist.