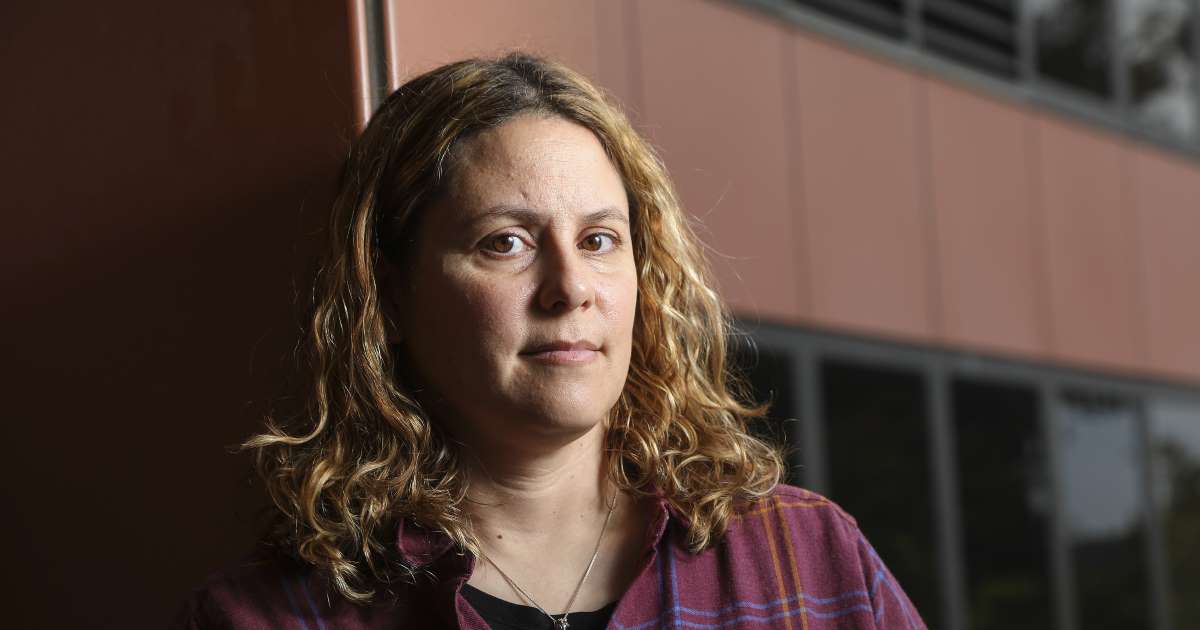 Olivia Labrador’s mind started racing last week after she received a call from her 89-year-old father’s nursing home, Garden Crest Rehabilitation Center in Silver Lake, informing her that a patient at the facility had tested positive for the coronavirus.


© Eduardo Contreras/San Diego Union-Tribune/TNS
Debbie Alexander, whose mother is in an assisted living facility with an outbreak of coronavirus cases, works at a research laboratory at a San Diego hospital. She poses for a photo on Tuesday, March 31, 2020 in San Diego, Calif.


“Oh my God,” Labrador thought, picturing patients she’d seen on breathing machines in the past. “What’s going to happen to all of them?”

Labrador’s family considered their options. They could bring her father home, but they worried he might already have been exposed to the virus that causes COVID-19, which would put other vulnerable relatives at risk.

As some experts advise pulling loved ones out of nursing homes to save them from the pandemic, Labrador and her family faced an awful dilemma, one that would have seemed unimaginable a month ago. But they are far from alone.

Across the country, outbreaks are occurring in nursing homes at terrifying speed — leading administrators to ban visitors, confine patients to their rooms and scramble to create sterile wings to treat residents who come down with the disease. The stakes are literally life and death, since residents, who are elderly and almost always have underlying health problems, are among the most vulnerable to the lethal new pathogen.

© Jay L. Clendenin/Los Angeles Times/TNS
The Kensington is one of 11 nursing home facilities with an outbreak of coronavirus in Los Angeles County, with three positive cases and multiple symptomatic cases. The assisted living residence in Redondo Beach, Calif. is seen here on Tuesday, March 31, 2020.

In Connecticut, state officials are re-opening previously closed facilities to create separate nursing homes only for residents who are positive for COVID-19 — like modern-day leper colonies. The “extreme precaution” is warranted, according to Connecticut officials, because the results can be catastrophic when the virus gets loose among such a vulnerable population.

One of the first coronavirus hot spots in the U.S. was at the Life Care Center nursing home in Kirkland, Wash., where two-thirds of the residents and 47 workers fell ill, and 37 people died.

The worrisome national trend is picking up steam in Southern California, too.

On Monday, Los Angeles County health officials announced that Garden Crest was among 11 area nursing homes with outbreaks, meaning three or more cases involving residents or staff had been confirmed at the facility.

That was nearly quadruple the number of nursing-home outbreaks county officials had announced on March 27.

The county’s Department of Public Health is also investigating reports of at least one suspected coronavirus infection at nine additional nursing homes. Of the county’s 54 deaths from coronavirus, at least six have been nursing-home residents.

Debbie Alexander’s 74-year-old mother is at the Kensington in Redondo Beach, another of the L.A. County facilities battling an outbreak.

When Alexander heard about the first case from administrators, she considered pulling her mom out, but there was nowhere available to move her that would necessarily be safer.

Alexander, who is still going to work at a research laboratory at a San Diego hospital, worries she might infect her mother if they were living together.

While she’s nervous, Alexander said, she’s satisfied with the measures administrators at the Kensington are taking to try to control the outbreak. They are not allowing visitors to enter, and residents are mostly confined to their rooms. Residents’ temperatures are taken twice per day. And administrators are sending a daily email update.

“Obviously, I’m worried about Mom. She’s very high-risk. But I think they are doing everything they can,” Alexander said.

Len Maisch, 84, said he moved into the Kensington about five weeks ago to care for his wife Joann, 71, who was diagnosed with a fatal and degenerative brain disease. They sold their Hermosa Beach home, a beloved place with citrus trees, when Joann could no longer use the stairs.

“When you have someone you truly love, you try not to leave them in a facility alone,” Maisch said. “She’s a beautiful flower, and she’s wilting, and so all you can do is give her love. … I can’t love her enough. I can’t kiss her enough.”

Now, with the coronavirus loose, the facility is essentially on lockdown, Maisch said. But he and his dog, Sophie, are still allowed to go outside to the courtyard. Every morning at 6, he takes the black-and-white spaniel for a walk, then comes in to read newspapers: The Times, the Wall Street Journal and the Boston Globe, among others.

Maisch said some of the facility’s staff has left since the outbreak, which he understands. He has been told one person tested positive, and five others were removed over concerns related to the outbreak. But in general, he said, he feels safe.

“I understand what’s going on, and I understand they are doing everything they can,” he said. “I feel comfortable that they’ve done a good job.”

Officials at the Kensington declined to specify how many residents or staff have tested positive, or whether any residents have died of COVID-19.

Families with loved ones in nursing homes should consider pulling them out if it’s at all feasible to care for them at home, said Charlene Harrington, professor emeritus at UC San Francisco’s School of Nursing.

“The risk of exposure is so overwhelming,” said Harrington, who has studied nursing homes since the 1980s. “It’s a terrible concern.”

Even before the recent outbreak, Harrington said, there were less-than-ideal conditions at many facilities across the state. Much of the work is done by certified nurse assistants, who have limited training in infection control and are paid minimum wage, she said.

To make ends meet, workers often patch together shifts at two or three facilities and work even when they don’t feel well.

Also concerning to nursing-home administrators and physicians is guidance from federal and some state regulators to accept new residents and those returning from hospitals without proof that they are virus-free.

Hospitals in New York are so burdened for space that regulators there ordered nursing homes to take in discharged patients even if they are COVID-19 positive.

Those nursing homes will “do their best, they’ll try to contain it, but people will run out of (protective equipment), caregivers will get sick, and people will die,” said David A. Nace, clinical chief of geriatric medicine for the University of Pittsburgh Department of Medicine. “New York will have killed people. There’s no way to soften that statement. It’s such a vulnerable population.”

Dr. Michael Wasserman, a geriatrician for more than 30 years and president of the California Association of Long Term Care Medicine, is lobbying California regulators not to follow a similar policy.

Current guidance from the California Department of Public Health advises nursing homes to be prepared to accept patients with the coronavirus from hospitals and advises the homes to quarantine those patients and make sure staff members have access to protective equipment — which has been in short supply everywhere — and that they are trained in using it.

Even with all the concerns, some of the most well-informed family members are making the hard choice to leave loved ones where they are, hoping to ride out the crisis.

Peter Beilenson, the health director of Sacramento County, is among them. He said he believes most nursing homes in the state are doing all they can under dire circumstances.

A few days ago, he went by his mother’s assisted-living facility but was unable to touch her.

“I stood outside and delivered some packages to her and was not allowed in,” Beilenson said. “We came to the window and put our hands together.”

In a press release on Tuesday, Paul Barron, administrator at Garden Crest, acknowledged that at least one resident had tested positive. He did not say how many others had.

She and her siblings can’t visit him anymore, and it’s difficult to communicate by phone, she said, because he has dementia. They manage to FaceTime with him every other day or so.

“It’s terrible,” she said, adding that, so far, he hasn’t shown any symptoms. “What if he does get sicker? What are we going to do?”

For now, she and her siblings are taking things one day at a time. They hope. They pray. And they imagine ways to get to their stricken father.

“If I have to get a hazmat suit to see my dad,” Labrador said, “that’s what I’ll be doing.”