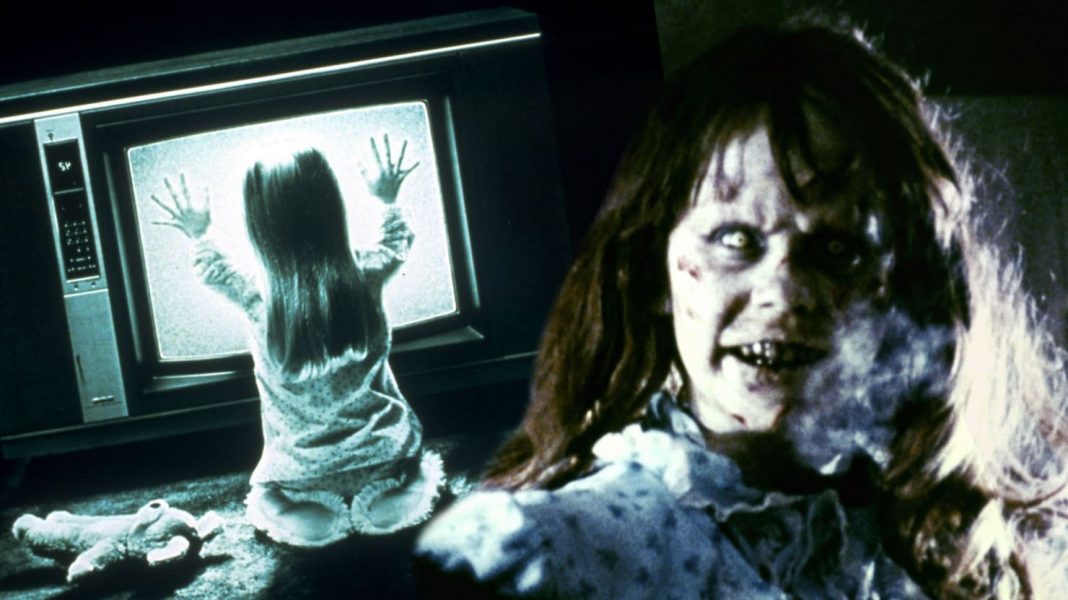 Even if you’ve never seen the original Poltergeist films or 1976’s The Omen, you’ve likely heard of the unbelievable strings of real-life misfortunes that plagued the makings of each horror classic. They’re “cursed” productions, or so the story goes—examples of how baiting the devil or the occult onscreen invites unholy consequences offscreen, too. Each became associated with the untimely (and often grisly) deaths of actors and crew members, freakish coincidences, and legendarily bad luck. The new five-part Shudder docuseries Cursed Films calls in the surviving makers of each film (and more, including The Crow, The Exorcist, and Twilight Zone: The Movie) to testify to the odds they faced and the impact of each “curse” on their lives.

But crucially, the series also stops to examine the cognitive appeal of a curse—why we, as humans, are so often tempted to explain unfathomable events through conspiracy theory. Somewhat eerily, the series also underlines a primal fear on which these “curses” are based: the viral nature of our conception of evil. That is, we tend to think of curses the way we do a virus; the individuals and locations associated with a cursed movie production become tainted by proxy, exposing others in turn to the wrath of some spirit or Antichrist. The series doesn’t expect its viewers to buy into superstition. But like horror films themselves, it knows that what we fear tells us a lot about ourselves. Through that lens, the study of these curses becomes worthwhile—plus, let’s face it, who isn’t morbidly piqued by the idea of supernatural forces visiting terror on a Hollywood movie set?

Written, directed, and edited by Jay Cheel (How to Build a Time Machine), the series zips along at a concise 25 or so minutes per episode, each dedicated to a separate cursed film. (The two episodes made available for review—on the Poltergeist movies and The Omen—were slated to premiere at SXSW until the festival’s cancellation amid the coronavirus pandemic.) Each manages a careful balance between vividly recounting lurid details, instilling the appropriate gravitas real-world tragedies demand, and casting a skeptical (and yet at times empathetic) eye toward the magical thinking that construes coincidences into a “curse.”

The Poltergeist trilogy provides an apt introduction to the human cost that myths about cursed films tend to lose sight of through generations of eager retellings. Dominique Dunne played the eldest sister in the first film’s supernaturally afflicted Freeling family; she died of strangulation only months after its release, just before her 23rd birthday. (She was murdered by an abusive ex-boyfriend, John Sweeney, who served a paltry three and a half years in prison for the crime.) Her onscreen little sister, the platinum-haired Heather O’Rourke, starred in two more Poltergeist films before her unexpected death during the production of the third. The chronically ill child actress hoped one day to direct a film of her own, as Poltergeist III director Gary Sherman recalls on camera. But she had been misdiagnosed with Crohn’s disease; she died at 12 years old when an intra-abdominal abscess ruptured, sending her into toxic shock.

Two more cast members’ deaths round out the rumored curse. On Poltergeist II: The Other Side, the actor Will Sampson, like his character Taylor, worked as a real-life shaman. He famously performed an exorcism on set to cleanse the production of wayward spirits before his death a year later, the result of kidney failure after a high-risk heart-lung transplant. Julian Beck played his spiritual opposite in the film, the evil cult leader Kane. He passed away after a lengthy battle with stomach cancer in 1985, seven months before the film’s release.

Family and friends of the deceased do not participate in the docuseries, though a handful of crew members attest to the perniciousness of the public’s appetite for proof of a “curse.” Special effects makeup artist Craig Reardon speaks disdainfully of the “conceptually ridiculous” notion that the curse stems from the first film’s use of real human skeletons—an easy parallel to the fictional story’s source of spiritual malevolence. As he points out, films as old as House on Haunted Hill (1959) and Frankenstein (1931) used skeletons from medical and scientific providers as a cost-effective alternative to artificial ones sculpted from plastic or clay. Poltergeist III director Sherman, meanwhile, recalls being hounded by tabloids in the wake of O’Rourke’s death. “None of us wanted the film released,” he says—especially not with its “stupid ending,” in which a double dressed as O’Rourke’s character appears with her back steadfastly kept to the camera.

The Poltergeist trilogy “curse” then is one isolated tragedy after another, unfortunate but not unexplainable. As the docuseries makes clear, the instinct to ascribe supernatural significance may be borne more from our collective desire to believe that life and death move according to some larger design—that everything happens for a reason, no matter how insidious.

The supposed curse that haunted—and nearly halted—the 1976 filming of Richard Donner’s The Omen is of a different, and perhaps more unsettling sort. The production of the horror classic about a little boy believed to be the Antichrist was plagued by ill luck that seemed summoned by the devil himself. After missing his scheduled flight, star Gregory Peck boarded another plane to the film’s set in England. The first flight crashed and killed everyone aboard, while lightning struck Peck’s plane in mid-air. Somehow, nature replicated the incident days later when screenwriter David Seltzer’s flight was also hit by lightning. (Both Peck and Seltzer walked away unscathed.) During production, executive producer Mace Neufeld stepped out of his London hotel to enjoy a lunch reservation with his wife. They were a block and a half away when an explosion rocked the air; the restaurant they were headed toward had just been bombed by the IRA.

A scene in which Damien (Harvey Stephens) and his mother Katherine (Lee Remick) become stuck inside a stalled car at a safari park took on unplanned authenticity. The car really stalled as the park’s baboons launched their attack on it; Remick’s panic was captured on camera. Two tragedies followed in the film’s wake as well: An animal handler at Windsor Safari Park was mauled and killed after filming there wrapped. And special effects artist John Richardson, who designed the film’s unforgettable decapitation scene, suffered a heartbreaking real-life fate shortly after production wrapped. He and his fiancée, Liz Moore, were on their way to their next gig on the set of A Bridge Too Far; the car crashed and Moore was beheaded. Allegedly, Richardson stumbled out of the car to see a Dutch sign that read “Ommen: 66.6 km,” though the plausibility of that last bit has been disputed.

Donner himself (appearing from inside his Superman memorabilia-stuffed home) gamely recalls the gauntlet that was getting the film made. The film’s religious adviser, Robert Munger, warned him of the “danger” of working with “that subject matter,” he says—but that was instantly “in one ear and out the other.” Some Satanists, already touchy about their hokey portrayals in previous Hollywood movies, had strong feelings about Donner’s handling of The Omen. The director recalls receiving nasty letters and death threats from “crackpots,” though his attitude about those years remains surprisingly sanguine. Despite the freak accidents and near-death misses, after all, he and his crew lived to enjoy the film’s outsized success. Rather than cursed, Donner says he sees the film as unquestionably “blessed.”

Cheel casts a wide net for experts, academics, fans, filmmakers, and critics (and even witches and black magicians) to contextualize the legends of each curse on camera. Some yield more fruitful insight than others and, occasionally, certain lines of inquiry wander down meanderingly dead-end roads at the expense of more promising ones. (I’d have preferred a search for the “Ommen 66.6 km” sign over an uneventful recreation of a Satanic ritual, for one.) But at its best, the series fact-checks each curse, re-emphasizes the humanity of the curses’ “victims,” and examines what makes horror fans especially prone to seeing patterns in coincidences, or sensing a touch of the supernatural in ultimately ordinary events. Why are horror flicks like Poltergeist or The Omen so persistently seen as “cursed” when equally troubled (non-horror) film productions like Apocalypse Now or The Wizard of Oz are not? What leads us to not only see what isn’t there, but to sometimes fail to see what actually is?

Digging at the answers helps illuminate how we process fear and tragedy, and why we weave narratives out of unrelated events. Curses are a form of storytelling, after all. And storytelling, no matter how frightening, is a way to make sense of the world. Cursed Films then is a rewarding exploration of the way our minds work—and the more of that that goes around these days, the better.