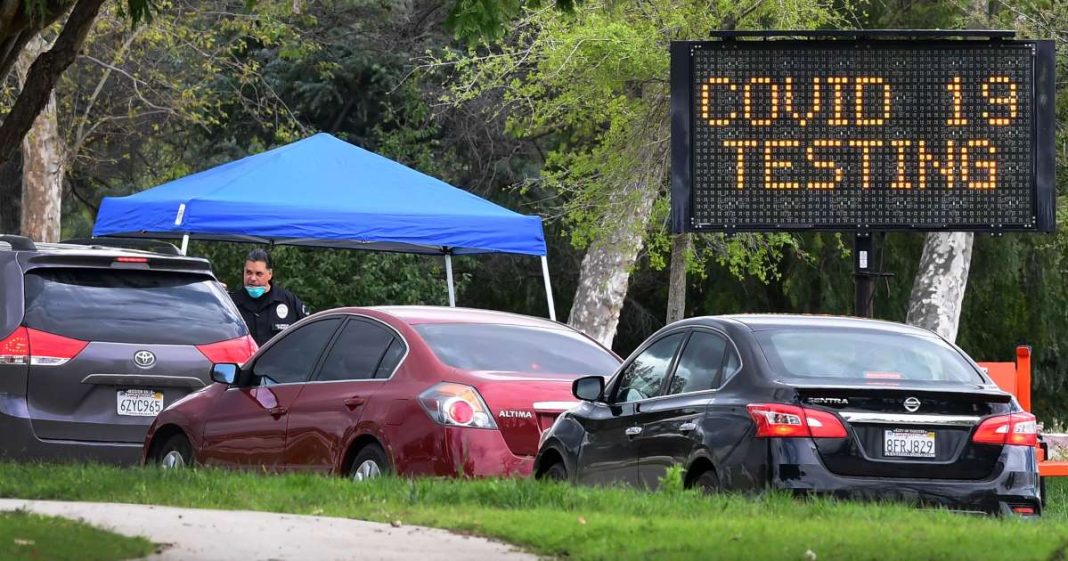 The number of coronavirus cases in California has surged past 3,000, and officials say the growth rate is so big that it could overwhelm hospitals in the coming days and weeks.

The stateside death toll now stands at 67, far less than the 285 deaths in New York, which has become the national epicenter of the coronavirus crisis. But officials said California needs to brace itself for far more cases and deaths.

“The worst days are still ahead,” Los Angeles Mayor Eric Garcetti said Wednesday. “We’ve taken actions earlier and swifter [than other cities], but no one is immune from this virus.”


© Genaro Molina/Los Angeles Times/TNS
LOS ANGELES, CA – MARCH 25, 2020 – Dede Oneal puts together prayerful hands while waiting in a line of cars to receive a test for COVID-19 at the Crenshaw Christian Center at 7901 S. Vermont Avenue in South Los Angeles on March 25, 2020. Attention Editor: Oneal is spelled this way.


California’s top medical advisor said Wednesday that COVID-19 cases continue to double in the state every three to four days.

That pace, he said, is on par with that of New York, where some hospitals are packed.

If that rate holds, California hospitals could see a surge in patients in one to two weeks, Dr. Mark Ghaly, the state’s secretary of Health and Human Services, said during a Facebook news conference.

“We originally thought that it would be doubling every six to seven days; we see cases doubling every three to four days,” Ghaly said. “[We’re] watching that trend very, very closely.”

San Francisco leaders said Wednesday that it was plausible the city could face a crisis similar to that of New York City and fall short 1,500 ventilators and 5,000 hospital beds.

“It is not even a question as to whether we will need more,” Mayor London Breed said during an hourlong news conference.

Nicholas Jewell, a biostatistics researcher at UC Berkeley who has been tracking the pandemic, said the coronavirus is spreading rapidly throughout the U.S., at a rate quicker than or on par with countries hit the hardest.

While the state continues to struggle to gain a clear picture of the outbreak, Jewell cautioned that the expected surge in the coming weeks does not mean social distancing and shelter-in-place orders are not working.

“We knew going in we will not see any impact of shelter in place for at least two to three weeks,” he said. “We have to be patient at this point and stay the course.”

Gov. Gavin Newsom echoed that message as well, and said the state had early data indicating that the measures may be slowing the virus’ spread.

“We know it’s had an impact on bending that curve and buying us time,” Newsom said. “Every day, that is another day that we’re getting more assets, more physical and human resources, prepared for a worst-case scenario.”

Across the state, public health officials reported a continued increase in COVID-19 cases, including in Los Angeles County, where the county health officer on Wednesday ordered that all those who test positive for the coronavirus self-isolate, along with those in close contact with the infected.

Officials confirmed 138 new cases Wednesday in the state’s most populous county, for a total of more than 800. Three additional deaths brought the total in Los Angeles County to 13. Statewide, more than 3,100 of those tested have been confirmed to have infections.

Public health officials emphasized that the actual number of people infected is almost certainly higher, but an accurate count is impossible because so few tests have been given.

Newsom announced that testing in the state had been conducted on more than 66,800 people but said that “it’s not good enough” to predict an accurate picture of what is happening or meet medical needs.

Roughly 1% of those who have tested positive in the county have died. The United States’ mortality rate for COVID-19 is 1.5%, a rate higher than that for the flu.