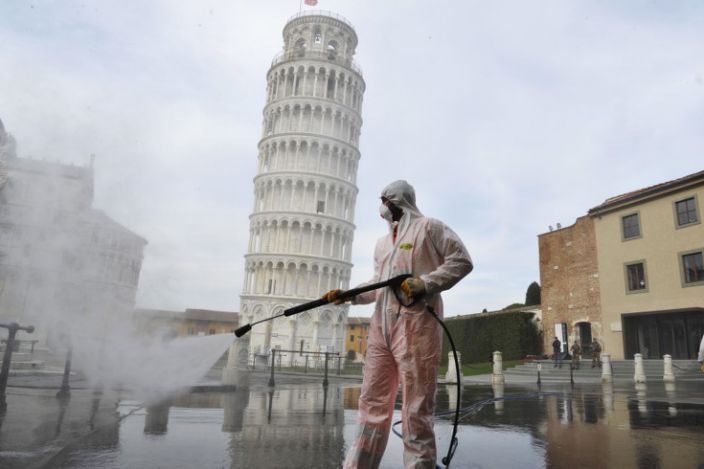 It begins each day in the early afternoon: Patients stream into hospitals with fevers, shakes, chills and breathing problems. In Italy, the latest country hardest hit by the new coronavirus, it’s been happening seemingly like clockwork.

“It’s really hard to see so many people sick at the same time,” Dr. Roberto Cosentini, a doctor in the northern city of Bergamo near Milan, said in a podcast for emergency room physicians. “It’s like a regular daily earthquake.”

Is this what’s in store for California?

More than 2,600 cases of COVID-19 have been confirmed in the Golden State and 55 people have died of the respiratory disease. That’s a far cry from the 69,000 cases and 6,820 deaths reported in Italy.

But health officials here have hinted that it’s possible.

“We are in a grave crisis,” warned Dr. Scott Morrow, San Mateo County’s health officer. “Unless everyone does their part and follows the county’s shelter-in-place order and the governor’s Safer at Home order, we will be facing an Italy-type catastrophe very soon,” he said in a statement released Monday night.

In nearby San Francisco, Dr. Grant Colfax, director of the Department of Public Health, is bracing for a surge in hospitalized patients within the next week or two. “The worst is yet to come,” he said.

California’s first coronavirus infection was confirmed in late January, and COVID-19 cases and deaths have been climbing exponentially since the beginning of March.

No one can be sure what the future holds for California. If residents respect Gov. Gavin Newsom’s order to stay home as much as possible, illnesses and deaths may be avoided or delayed. On the other hand, if a single asymptomatic person enters the state and becomes a superspreader — transmitting the virus to a large number of people — he or she could ignite a new outbreak.

Either way, there’s good reason to expect that the worst can come suddenly, as it has in Italy.

For weeks, King County in Washington state and the San Francisco Bay Area were the hardest-hit areas in the U.S. Then, seemingly out of nowhere, New York Gov. Andrew Cuomo announced 5,707 new coronavirus cases on Monday night. The next day there were an additional 4,790 cases, bringing the Empire State’s total to 25,665.

In Italy, the sudden rise in the death toll was probably due to a combination of bad luck and a failure to act quickly, Rutherford said.

In fact, Italy’s death toll is more than double that of China, the birthplace of the pandemic, despite the fact that China’s population is 23 times larger.

The first sign of problems came on Feb. 20 in the form of a previously healthy man in his 30s with an unusual case of pneumonia that required intensive care. Although he had no history of travel to China, he tested positive for the coronavirus at Codogno Hospital in the province of Lodi, about 30 miles southeast of Milan, according to a report in the Journal of the American Medical Assn.

Within the next day, 36 additional coronavirus cases were identified. Even worse, the virus quickly spread among the hospital’s medical staff, said Dr. Maurizio Cecconi, president-elect of the European Society of Intensive Care Medicine and a coauthor of the JAMA report.

“Don’t underestimate this. This is not a normal flu. This is serious,” Cecconi said in an interview with the medical journal’s editor in chief. “The percentage of patients that require intensive care admission is high.”

An uneven public health response worsened matters. The Codogno area quickly closed businesses and many stayed at home, but other communities nearby didn’t act so decisively. It wasn’t until March 8 — more than two weeks later — that a stay-in-place directive was ordered for some 16 million people in Italy’s north, an area that included Venice and Milan.

The delays proved deadly. Bergamo was hit hard; the chapel at the city cemetery had to be converted into a morgue to handle the dead.

Italy was particularly vulnerable to COVID-19 because its population skews older, Rutherford said. According to the World Bank, 23% of Italy’s population is at least 65. Only Japan’s population is older. (In the United States, 16% of the population is 65 or older; in China, it’s just 11%.)

In a study of 803 people who died in Italy, about 88% of them were at least 70 years old, according to data Cecconi shared.

The elderly and those with preexisting health conditions face the highest risk for critical illness and death if they become infected with the coronavirus officially known as SARS-CoV-2. If the virus settles deep in the lungs, it can leave victims unable to breathe on their own and cause septic shock and multiple organ failure. The immune system’s response to infection can make matters worse by drowning the tiny air sacs in the lungs that deliver oxygen to the bloodstream.

Furthermore, Italy was stymied by a problem familiar to the U.S. — the inability to carry out widespread testing. That impacted doctors”http://news.yahoo.com/”ability to make accurate diagnoses and allocate patients appropriately,” Cecconi and his colleagues wrote.

Under those circumstances, adding more ICU hospital beds isn’t enough, the authors said. Stay-at-home measures “may be the only possible way to contain the spread of infection and allow resources to be developed for the time-dependent disease,” they wrote.

Health workers in California have been paying attention to the podcasts from Italy as they brace for an expected onslaught of COVID-19 patients. The podcast featuring Cosentini described conditions so intense that the medical staff needed the help of a staff psychologist.

Treating COVID-19 patients takes time. A patient who can’t breathe on his or her own may need to be on a ventilator for three to 20 days. A study of patients in Wuhan, China, reported that the median time between the onset of illness to discharge from a hospital was 22 days. (Those who died lasted 18.5 days after their symptoms first appeared.)

“We not only fill up the beds with people with this disease and those who are suspected of having it, but we can’t move [them] out until we’re sure they’re negative,” Rutherford said.