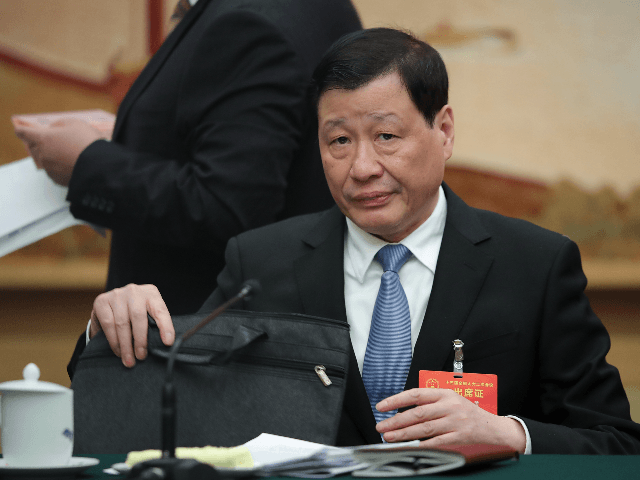 The Communist Party of China appointed Ying Yong, the mayor of Shanghai, the new head of the Party in Hubei province on Thursday, as well as replacing the Party leader in Hubei’s capital, Wuhan, the epicenter of the ongoing coronavirus outbreak.

Shanghai is about 500 miles from Wuhan and there is no clear connection between Ying and Hubei province. Ying is one of dictator Xi Jinping’s closest allies, however, and Chinese state media applauded Ying and the new Wuhan party chair Wang Zhonglin for being “problem-solvers who can make accurate decisions.”

Outgoing Hubei Party chief Jiang Chaoliang is the most powerful person so far to face consequences from the newly discovered coronavirus outbreak, which has at press time been confirmed to have infected over 60,000 people and killed over 1,000, nearly all of them in China.

The firing of Jiang and Wuhan Party leader Ma Guoqiang occurred concurrently with the replacement of China’s director of the Hong Kong and Macau Affairs Office. Xia Baolong, another Xi loyalist with a record of specializing in Christian persecution, has taken over that office. Hong Kong has documented dozens of coronavirus cases amid a months-long popular push for autonomy from China.

The Global Times did not note that Ying is a longtime ally of Xi’s, instead claiming he was promoted to running Hubei’s Party because he has done so well containing the virus in Shanghai. At press time, Shanghai has documented 315 cases of coronavirus and one death.

“A non-sloppy government is one brave enough to face supervision; a government eager to make progress is one willing to accept criticism,” the Global Times quotes Ying as saying.

In Hong Kong, Beijing replaced its liaison office head Zhang Xiaoming, demoted to run daily operations at the office but not make key decisions. As Hong Kong’s ire has remained directed at the Hong Kong government for submitting to Beijing’s wishes, rather than at Beijing itself, the Communist Party has apparently chosen not to remove Zhang from the public eye entirely.

His replacement, Xia Baolong, served as Xi Jinping’s deputy and has led efforts by the Communist Party to persecute the growing numbers of converted Christians in the country. Xia pioneered the use of zoning and other urban ordinance restrictions to punish churches for placing crosses in public, or demolish crosses and churches that violated the alleged rules. His promotion has alarmed many in Hong Kong who see it as a response to the ongoing pro-democracy movement there.

The replaced officials join several local Party authorities already demoted for allegedly failing to respond to the outbreak in time. Wuhan locals reported knowing of an illness spreading in the city in December and officials shut down a wild meat market believed to be the origin of the virus on January 1. Wuhan officials did not make the public aware of the threat, however, until January 20, allowing several high-risk mass assemblies to go on and likely helping the virus spread.

Wuhan Mayor Zhou Xianwang has said he kept the virus a secret because he does not have the authority, via communist law, to warn residents of a public health emergency without permission from superiors, likely those in Beijing.

The Global Times, a Chinese state propaganda outlet, announced the “reshuffle” of Communist Party leaders from outside Hubei on Thursday as proof of “the central government’s determination to win the battle while letting competent ‘firefighters’ handle the challenges.” It cited Xi Jinping as openly stating that the coronavirus outbreak would be helpful to purge Communist Party cadres of which he did not approve.

“The top authority also highlighted fighting the disease on the frontline is also a major way of assessing the performance of Chinese officials amid the outbreak, and those who fail to fulfill their duties would be held accountable,” the Global Times paraphrased Xi as saying.

The newspaper claimed that, following the revelation of the coronavirus outbreak, “more than 100 officials in Hubei have been held accountable for their incompetence in dealing with the prevention and control work.” It did not specify how the regime had dealt with this alleged “incompetence.”

Other than the two Communist Party chiefs, much fewer than 100 names have been made public as having been removed from power. Those known are Tang Zhihong, the head of the health commission in the Hubei city of Huanggang; the mayor and local Communist Party cadre in Huajiahe village, Hubei; and Zhang Jin and Liu Yingzi, health officials at the Hubei provincial level.

The Epoch Times, an anti-communist Chinese-American newspaper, reported on Thursday that several officials in Hubei were not fired, but resigned from Communist Party posts after being asked to engage in local leadership operations to prevent the spread of the virus. The newspaper names at least three officials in Hubei – citing local journalists there – who tendered their resignations without offering a reason as soon as they were offered a promotion to coronavirus response leadership.