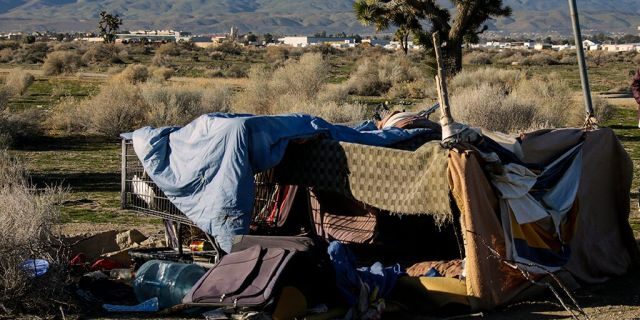 A fire broke out Monday at a homeless encampment in California on Monday, resulting in an explosion.

The blast produced a mushroom cloud underneath a Los Angeles I-10 that nearly engulfed a man who appeared to be moving debris from the fire, according to a video posted by a passerby later that morning.

“After things starting exploding, I was outta there,” the driver said. “I often fear that I could possibly see a tragedy like this.”

HOMELESSNESS IN SAN FRANCISCO: HERE ARE THE STATISTICS

Authorities cleaned up the encampment later that day, but two days later the driver said it was “packed full with new homeless.”

He hoped the video could show how “fragile and dangerous” the homeless situation is getting in the city.

LANCASTER, CA – JANUARY 28: Derrick Chambers checks out a homeless encampment in an open area of Southern part of Lancaster while documenting their number in the area. (Photo by Irfan Khan/Los Angeles Times via Getty Images)

CHILD HOMELESSNESS IN US AT HIGHEST IN MORE THAN DECADE: FEDERAL REPORT

Fire authorities said it’s not their protocol to investigate what caused the blaze because it didn’t result in injuries or damage any property.

The driver was reportedly the first to alert authorities around 6:30 a.m. that morning.