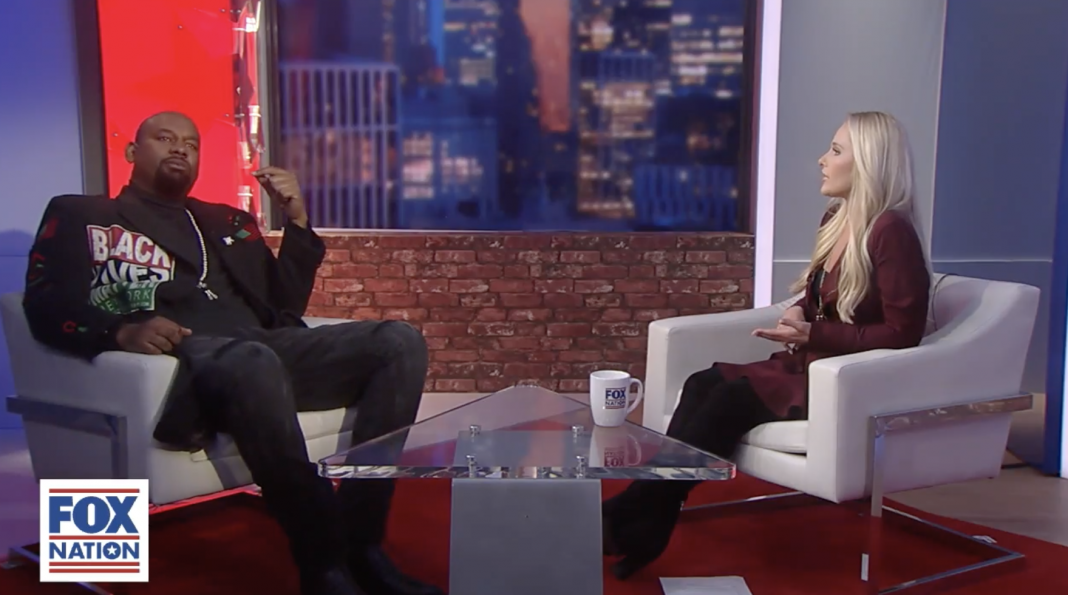 The head of the Black Lives Matter movement in NYC is defending rioting and looting, claiming that such behavior is more effective than peaceful protest.

Hank Newsome, BLM-NY head and cast member of BET’s CopWatch America, recently appeared with No Interruption host Tomi Lahren on Fox Nation and claimed that rioting is the “American way,” adding that peaceful protest is the “tool of white supremacy.”

“The riot is the language of the unheard,” he said. “What if you throw a whole bunch of tea in the water and start a war? That’s what this country was built on.”

At last month’s demonstration in NYC, a group known as “Decolonize This Place” filled the streets as activists carried signs with slogans such as “F— the Police” and “No cops! No fares!”

Later, Newsome took to social media and referred to Lahren as a “White Supremacist Barbie.”

This may have been in response to Lahren’s criticism of the demonstrations, which surrounded the rising costs of subway tickets and heavy police presence near the train platforms.

The movement committed acts of violence and vandalism during the protests, causing damage to the very train systems they allegedly depend on to transport them across the city at low cost.

“’Clearly disgusting anti-police chants and signs, blocking entrances, vandalizing buses, gluing and/or breaking transit card readers and illegally jumping turnstiles is their chosen method to raise awareness of their perceived oppression and fight for their distorted concept of justice, because nothing says justice like refusing to pay a standard fare,” Lahren said of the matter.

According to the British tabloid Daily Mail, Newsome justified the actions, claiming that white people were just as angry at the police.

“There are a lot of black people who say ‘f**k the police,’” Newsome said.

“But the majority of the people out there who are saying “f**k the police”, in these particular events, are white people. You have to really start to ask why people say, ‘f— the police.’ You really have to take away this fetish or the way that we fantasize policing and really look at it for what it really is.”

Newsome then went on to claim that blacks in America have never had good relations with police.

“From day one, black people’s interactions with the police had been negative,” he said.

The activist then went on to say it’s perfectly acceptable for people to destroy property and endanger lives, as their own country is comfortable with fighting foreign powers.

“It is OK to vandalize, to light things on fire and to loot businesses because the United States of America drops bombs on other countries, and because we have problems…People have grievances. I think that it is a tool of white supremacy to say if you want freedom, then you get it by protesting peacefully…Because the white supremacists who built this country never earned anything peacefully. They did it through bullets and blood. And that’s the American way.”