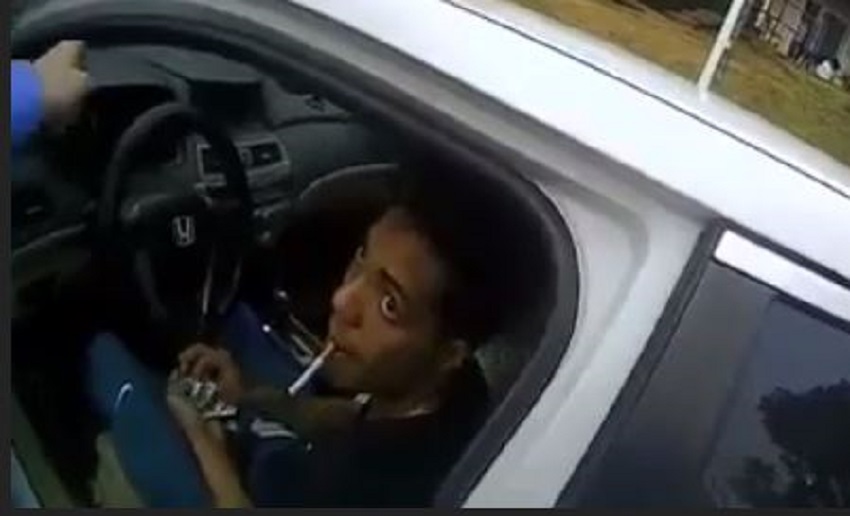 Two Raleigh police officers who appear in a now-viral video punching a 22-year-old man before arresting him — an attack the man said left him with stitches in his face — are being investigated by the Police Department.

In a video widely circulated on Twitter, Braily Batista can be seen taking a knee to the ribs and a fist to the back from a police officer before he is pulled out of his car. Batista’s face on the video and in a mug shot appears bloody with a black eye.

Police said in a news release Wednesday that Braily Andres Batista-Concepcion was arrested Tuesday after three hit-and-run incidents and also faces charges of driving under the influence.

But Batista told The News & Observer, “They hit me so bad I forgot everything.” He spoke in an interview Wednesday at his northeast Raleigh home, his face swollen. He said he told the officer he was going to get out of the car but then got hit “from what I remember.’

Officers responded to the first incident in the 3500 block of Wake Forest Road at 9:30 a.m., police said in a news release Wednesday night. Before they got there, the suspect had fled and was involved in a second hit-and-run in a parking lot at St. Albans Drive and Wake Forest Road, and then struck a pole at 4320 Wingate Drive, the release said.

One of the drivers who said he was hit by the suspect and an onlooker both called 911 to report the hit-and-run at St. Albans Drive and to describe the events, according to audio of the calls released by Raleigh Police.

An officer spotted a car matching the description from those incidents while it moved erratically on nearby Navaho Drive and stopped the car, the release said. The driver appeared to be impaired while transporting three passengers, the release said.

Batista, who said Wednesday he does not use a hyphenated last name, also is charged with two counts of contributing to the delinquency of a minor, simple possession of marijuana and resist, delay, and obstruct.

The Police Department said it is reviewing the officers’ actions as it does all uses of force. The officers were wearing body cameras, and their patrol vehicles captured dash camera video of the arrest. The department will petition Superior Court for release of the videos.

It is unclear who took the viral video, but it is filmed from the right side of the back seat. After the officer knocks Batista with his knee, a voice is heard asking, “Yoooo, what are you doing? What are you doing?” while an officer is heard shouting, “Get out of the vehicle” several times while Batista appears to resist.

Batista said he was hospitalized before being taken to jail. He could not remember if he went to WakeMed or Duke, but Navaho Drive is near Duke Raleigh Hospital and the sports bar where he works.

“I’ve got stitches, I’ve got a black eye, bruises,” he said. “My arms are all bruised up, but I don’t think I’ve got broken bones.”

Batista said he wanted officers to read him his rights. He and friends were in another friend’s car early Tuesday morning, but he said he did not remember hitting the car and did not have any marijuana.

As Batista spoke, his stepfather Melvin Araujo viewed the video again and was near tears.

“I don’t hit my son,” he said, noticeably upset, and he police shouldn’t, either.