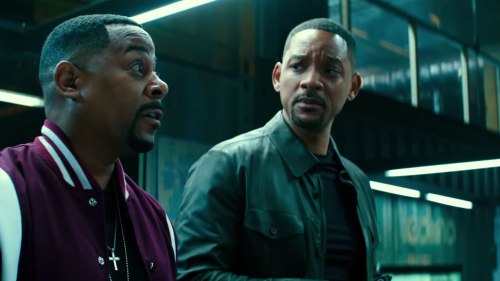 UPDATED, SATURDAY AM: w/chart When it comes to releasing a long-delayed sequel, or rebooting an old popular franchise, it’s risky business.

Yes, sometimes, there’s slam dunks like Jurassic World, but then you have disasters like Terminator: Dark Fate. But with Bad Boys for Life, the third title in the franchise in 17 years with two stars, who some may have believed to be on the wane (Will Smith and Martin Lawrence), Sony has resurrected a hit with the threequel set to open to a great $68.4M over 4-days. That’s the second best MLK weekend ever after American Sniper ($107.2M) and ahead of Ride Along ($48.6M). The threequel also reps the best opening for the action cop franchise besting the $46.5M of 2003’s Bad Boys II, and it’s an amount which is currently set to best the entire domestic gross of the first 1995 Bad Boys which finaled at $65.8M. Things are going so well for Bad Boys for Life this weekend, Sony is already prepping a fourth film.

‘Dolittle’ Review: Robert Downey Jr. Talks To Animals But Doesn’t Have Much To Say

There’s been some real, blood, sweat and tears in birthing this third movie on behalf of the Culver City studio, jumping around Smith’s production schedule, having Joe Carnahan and then having him fall out as director, and hopping the release date around the calendar several times. Initially the movie was supposed to come out on Feb. 17, 2017 (dated back in August 2015) then eventually it was pulled off the calendar in August 2017, then placed back on the release schedule with this year’s MLK weekend. Let’s face it, it’s been quite a gamble for Sony when it comes to reigniting their old IP, a matter of a heads or tails coin flip. For every Jumanji and Little Women, there’s duds like The Grudge and Charlie’s Angels. Zombieland: Double Tap was OK at $121.7M WW, but it only made $19.4M than its first chapter from ten years ago. Sony hit the hammer on a third Bad Boys again, and again, and again, and they got it so right with audiences enjoying it with an A Cinemascore (just like the last two movies) and 5 stars on PostTrak. Reboots are complicated, and it’s not just a matter of plug and play (as Skydance and Paramount learned the hard way by slapping James Cameron on as producer and story by, along Linda Hamilton and Arnold Schwarzenegger on Terminator: Dark Fate).

What was the secret sauce to making Bad Boys for Life work? The whole conceit that the movie is about the transition of young bucks becoming elders, topped off by the cadence between Lawrence and Smith. That’s the way guys talk to each other about what’s going on, and that’s why the franchise holds so much weight.

Says social media monitor RelishMix about the online chatter they noticed in advance of this weekend, “Both Will Smith and Martin Lawrence have their fans, and this core contingent is excited by the materials they’re seeing for Bad Boys for Life.  As for newcomers, Kate Castillo is getting some shout-outs as are Vanessa Hudgens and some of the other new team-members.  It’s clear it’s about the action for those willing to make the trip to theaters, the action and that Porsche.”

And social media was scorching for the threequel with its total followers across Facebook, FB video views, Twitter, YouTube views and Instagram counting a huge 900M, in large part to a monstrous Black Eyed Peas song contributing to the reach.  YouTube views for the movie are at 575.6M alone for the film with RelishMix noting that “even without the Peas’ song, the reach easily exceeds this level.”

The pic’s viral video rate is massive at 25:1 with a mix of official clips from ESPN and Telemundo. Together Smith and Lawrence count 137.5M fans, with Smith accounting for 86% of that tally. Like Dwayne Johnson, Smith is dominating his social feeds to alert the world that he’s got a new movie out, and both Lawrence and him have been pushing the pic since it began shooting in Miami when they announced production on Instagram. That post alone drew 11.1M on Smith’s handle.

“Since then, the video has grown to account for 44% of this movie’s entire social reach.  Still, there’s no denying the re-posts of the music video – not to mention the immense views for other Bad Boys clips.  The point is, this music video seems to have kick-started the awareness for Bad Boys for Life, whereas last November’s Charlie’s Angels (also a Sony release with a huge music video contributing to its social campaign) seems more one-dimensional in that fan listened and liked the video – but failed to see its association to the music with the strength that Bad Boys seems to have,” adds RelishMix.

In fact, if we you minus the Peas music video and Smith’s social media following, Bad Boys for Life would still be left with a near half billion worth of followers (well ahead of the action comedy average social media universe count of 156M).

And, that Dolittle. Just like Universal was trying to have some good business sense by finally bringing a legacy Andrew Lloyd Webber musical to the screen in the hands of a capable musical director like Tom Hooper, there was a logical business bet made on making a family film with Robert Downey, Jr. three years ago in the wake of him launching franchises like Iron Men and Sherlock Holmes. The CAA-packaged $160M movie with Oscar-winning filmmaker Stephen Gaghan was a hot package around town that Universal won back in March 2017, beating out 20th Century Fox — which made the 1967 Rex Harrison film and the Eddie Murphy redo films  — and Sony. So, Uni wasn’t the only crazy studio who believed there was gold to be mined. As has widely been reported, Gaghan, who is known for directing smaller action dramas like Syriana and Gold, bit off more than he could chew here in regards to making a VFX comedy, with the pic under going 21 days of reshoots last spring with director Jonathan Liebesman and Lego Batman helmer Chris McKay overseeing rewrites. I’ve also heard it wasn’t always simpatico between Gaghan and Downey, Jr (but still, we’ve seen such torturous projects like Venom rise like a phoenix from the ashes). Anyway, Uni knew that they had a bag of rocks on their hands with this $175M production. One finance source remarked “you can tell what they think of the movie, by releasing it at a time when most kids are in school”, but that said, if there’s a weekend to do a cash grab, it’s on a 4-day holiday where close to 100% K-12 kids are off on Monday. Not to mention, Jumanji: The Next Level would have buried this film at Christmas.

At $30.6M over 4-days, it’s a pretty good start for a PG movie, under the $39.2M that 2009’s Paul Blart: Mall Cop opened to over its MLK (that pic ending its stateside run at $146.3M). However, Dolittle‘s production cost is its biggest snake bite. Dolittle gets a B CinemaScore (the same as Paul Blart), and 3 stars on PostTrak, which doesn’t guarantee any kind of long term success.

Critics at 19% Rotten on Rotten Tomatoes complain that the movie doesn’t have any human feeling, is too long, lifeless given the VFX with Rolling Stone‘s Peter Travers exclaiming “Come back, Cats, we forgive you” and NPR’s Scott Tobias hysterically sniping, “Dolittle is a not a film. Dolittle is a crime scene in need of forensic analysis. Something happened here. Something terrible. Something inexplicable.”

Number wise, Dolittle looks similar in some regards to Maleficent: Mistress of Evil. That Disney evil princess movie cost $185M before P&A ($10M more than Dolittle) and fizzled stateside with a 3-day opening of $36.9M. Finance sources have informed me that the movie broke even with its $113.6M domestic, and $491.5M WW box office. However, Maleficent 2 had overseas working greatly in its favor, with a $153M global opening weekend. Dolittle will likely file a number that’s around $60M WW by Monday EOD (granted, Maleficent 2 had bigger countries going in its opening suite with China, Russia, Brazil, and Mexico, all of which are not part of Dolittle‘s offshore release this weekend). The CinemaScore was also better on Maleficent 2 with a solid ‘A’ so it had that going for it. There’s too many dark clouds around Dolittle to even suggest it could break even at this point in time.

Below are early Saturday estimates. We’ll have more analysis and updates for you throughout the weekend.

UPDATED, 12:09 PM: Sony’s Bad Boys for Life is headed for the second-best MLK weekend opening of all time at the domestic box office, with a projected four-day gross of $63 million-$67 million. Today looks to be around $21M-$23M.

The other new MLK opener, Universal’s Dolittle, is looking at a four-day total of $28M-$30M. That’s not bad for a family film, but will not be enough to consider this film a success based on its lofty $175M production cost.

PREVIOUSLY, 7:11 AM Friday: Sony’s Bad Boys for Life, a sequel 17 years in the waiting, previewed at 3,154 theaters last night making a great $6.36 million. That amount for the R-rated film is bigger than American Sniper‘s $5.3M preview, which turned out to be the record opener over the 2015 MLK holiday with a four-day total of $107.2M.

Sony is seeing a $38M opening for Bad Boys for Life, but tracking yesterday raised its projections to $50M-$56M for the weekend ahead of the $40M+ figures we saw midweek. Other MLK previews that Bad Boys for Life beat include Ride Along which made $1.1M off 9 PM previews back in 2014 and Ride Along 2 grossed $1.3M off 7 PM showtimes. Ride Along is the second-highest opener over the MLK holiday with $48.6M, while Ride Along 2 is fifth with $41M.

Universal will fare better this weekend with the Amblin/New Republic production 1917, which led all movies in regular release last night with $3M, off 10% from Wednesday, for a first wide week of $51.9M, running total of $54.6M with monies since its limited Christmas Day launch. With 10 Oscar noms, the Sam Mendes WWI movie is expected to make around $27M in its second wide weekend over four days.