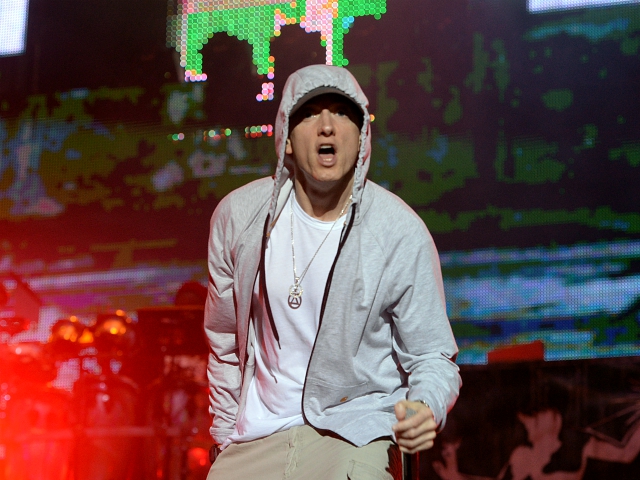 After decades of glorifying gun violence, left-wing rapper Eminem released his 11th studio album on Friday, Music to Be Murdered By, which features the song “Darkness,” which pushes hard for gun control, The song’s video encourages viewers to register to vote for candidates who will subvert the Second Amendment.

The song is on the album, Music To Be Murdered By, a follow-up to his 2018 effort Kamikaze. The lyrics to “Darkness” repeatedly reference the October 1, 2017, Las Vegas mass shooting, wherein a gunman broke out windows and shot at unarmed innocents attending the Route 91 Harvest music festival.

Genius.com published lyrics to “Darkness.” Here is an excerpt:

Now I’m starin’ at the room service menu off a Benzo
I can hear the music continue to crescendo
I can see the whole fuckin’ venue from my window
That’s when you know you’re schizo (Hello darkness, my old friend)
‘Cause I keep peekin’ out the curtain from the hotel
The music is so loud
But it’s almost as though I don’t hear no sound

Here is another bite:

‘Bout to snap and go motherfuckin’ wacko at any second
‘Bout to cancel the show just as fans below rush the entrance
Plan is a go to wreck shit, cameras in all directions (Hello darkness, my old friend)
The press is about to go ape shit bananas on all the networks
Commando with extra clips, I got ammo for all the hecklers
I’m armed to the teeth, another Valium, fall off the bed
Hit the ground and crawl to the dresser
Alcohol on my breath as I reach for the Scope
I’m blackin’ out, I’m all out of meds
With them benzodiazepines gone
Now it’s just magazines sprawled out on the floor
Fuck the media, I’m goin’ all out, this is war

Eminem promoted a teaser video for song. A longer video was later released.

The music video is replete with Eminem’s gun control pleadings and includes scenes from mass shootings and asks: “When will this end? When enough people care.” A message pops up on screen and reads, “Register to vote at vote.gov. Make your voice heard and help change gun laws in America.”

Throughout his movie and music career, Eminem has openly promoted gun use often times advocating murder and depictions of violence with firearms.

That same day, Breitbart News pointed out that Eminem has more than once used his music to show his affection for firearms.

Here are five songs in which he rapped about everything from shooting police officers to just killing people as a means of payback.

Left the keys in the van, with a gat in each hand
Went up in Eastland and shot a policeman
Fuck a peace plan, if a citizen bystands
The shit is in my hands, here’s your lifespan

On the 1999 record “Kill you,” Eminem spends four minutes fetishizing over various ways to commit murder. In one lyric, he warns a woman that he’ll put a bullet through her.

Put your hands down, bitch, I ain’t gon’ shoot you
I’ma pull you to this bullet and put it through you

In a skit off the 2002 album “The Eminem Show” Eminem is reenacting a 2000 incident that found him threatening to kill his ex-girlfriend and her new boyfriend with a loaded gun.

On the 2004 song “One Shot 2 Shot,” Eminem delivers a gun violence-heavy hook and a verse riddled with references to pulling triggers.

One shot, two shot, three shots, four shots
All I hear is gunshots, this is where the fun stops
Bodies drop, hit the floor, music’s off, party stops
Everybody hit the door, somebody’s licking shots off

On the four-minute song, Eminem raps:

I’m trying to pull the trigger but it’s stuck, fuck
My shit is all jammed up, ugh
Come on, you cock-sucking, good-for-nothing
Motherfucking piece of shit shoot, ah
Yeah! What up, bitch!? Say that shit again
Shot, the bullet missed, hit a brick, bounced of it
Ricocheted back in his shin
Went through his bitch on it’s way back, hit his friend
Payback homie, don’t play that shit is spin
To be on I told you to leave this shit alone
Or… (I’m gonna get my gun!)
And it’s a shame, I’m too drunk to even aim
Denaun stepped in the way and I shot him in his leg
It’s like

In addition to the lyrics glorifying gun violence, Eminem used a paintball gun against a police cruiser in his autobiographical movie, 8 Mile. The scene comes as he is driving a car and he and his occupants take turns shooting, first at civilians on the sidewalk then at the police cruiser.

Despite all the lyrics about shooting officers and bystanders, and using guns to even the score, Eminem is now criticizing American’s access to firearms and calling for voters to support more gun control — which only restricts that rights of law-abiding citizens.