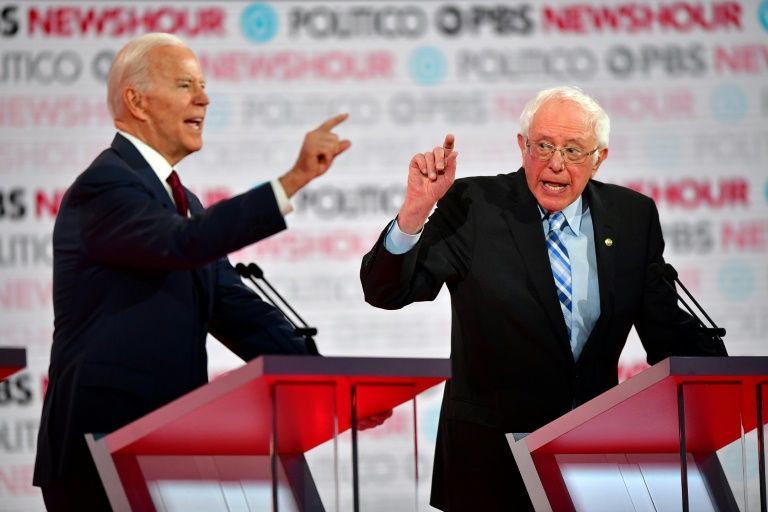 Des Moines (United States) (AFP) – Six Democrats braced for Tuesday’s final presidential debate before Iowa kicks off the nomination process February 3, and with no candidate yet gaining the upper hand, they were ready to rumble.

Former vice president Joe Biden is leading nationally, but no clear frontrunner has emerged in Iowa, and candidates are scrambling for a breakout moment that could translate into the first tangible victory in a tight contest over who challenges President Donald Trump in November.

With the battle intensifying, some of the sharpest exchanges of the year-long campaign were leveled between top liberals Bernie Sanders and Elizabeth Warren, senators and self-described friends whose cordiality accord appears to have unraveled.

The debate in Des Moines, Iowa risks being overshadowed by another historic political drama: Trump’s looming impeachment trial in the US Senate, which — if it begins later this week or next — would force four presidential candidates to stay in Washington serving as jurors in the proceedings.

Tuesday’s nationally televised showdown will feature the smallest stage yet — and its whitest, with no people of color qualifying for the debate for the first time in the 2020 race.

The Democratic Party last year hailed its historically diverse presidential field, but one by one minority candidates have fallen by the wayside, the latest being African-American Senator Cory Booker, who dropped out on Monday.

As Iowa nears, Tuesday may spell the most consequential moment of the campaign to date.

Fortified by his resilient showing in recent polls despite suffering a heart attack last November, Sanders appeared eager to seize the moment and went on the offensive against rivals.

He savaged Biden with a pointed statement criticizing the ex-senator’s vote in support of going to war in Iraq, a subject that has gained renewed review with Trump’s ordered killing of an Iranian commander in Baghdad and the subsequent fallout.

“It is appalling that after 18 years Joe Biden still refuses to admit he was dead wrong on the Iraq War, the worst foreign policy blunder in modern American history,” Sanders senior advisor Jeff Weaver said in a statement.

Sanders has also apparently chided Warren as the candidate of the elite, with Politico reporting that Sanders volunteers were instructed to tell voters that Warren could not expand the Democratic base in a general election.

Warren said she was “disappointed” by the report that Sanders sent volunteers to “trash” her, telling reporters in Iowa that “I hope Bernie reconsiders and turns his campaign in a different direction.”

In a further sign that the gloves were off, CNN reported Monday that Sanders told Warren in a private meeting in late 2018, as they both contemplated presidential runs, that he did not believe a woman could defeat Trump.

The Sanders campaign responded swiftly, saying, “It is ludicrous to believe that… I would tell her that a woman couldn’t win.”

Polling is tight in Iowa, with Biden, Sanders, Buttigieg and Warren all separated by just 4.7 percentage points, according to a RealClearPolitics average of recent polls.

With Iowans fretting over who would be best positioned to defeat Trump, the race is volatile; each of the top four candidates has led at least one major state poll in the last two months.

Biden was lagging in Iowa in November, perhaps buffeted by the scandal of Trump pressuring Ukraine to open investigations into Biden and his son Hunter, who served on the board of a Ukrainian energy company.

But Biden has proved resilient, and the latest poll, by Monmouth University, showed him leading in Iowa.

With Sanders and Warren clashing over who could best carry the progressive torch, Trump weighed in: “Elizabeth is very angry at Bernie,” he tweeted. “Do I see a feud brewing?”

Trump may have inadvertently picked a fight with Sanders Sunday when the president highlighted the 78-year-old’s strong poll performance and posted online: “So what does this all mean?”

“It means you’re going to lose,” Sanders tweeted back.