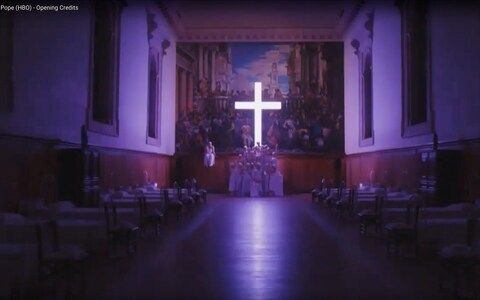 A scene in The New Pope, a mini-series starring Jude Law and John Malkovich, in which sexy young nuns dance in their nighties beneath a giant fluorescent crucifix, has incurred the wrath of the Catholic Church.

The provocative scene, which was filmed in a former monastery in Venice, was denounced as “offensive” by the archbishop of the city, whose official title is patriarch.

Accompanied by flashing strobe lights and club music, around 15 young women gyrate and dance at the base of the crucifix in the opening titles of the new series, which follows the success of The Young Pope.

The scene is typical of the baroque, theatrical and sexy style of both mini-series, which have been criticised by some Catholics – L’Osservatore Romano, the Vatican newspaper, called The Young Pope “caustic” and “grotesque”.

It was filmed in a former monastery on the island of San Giorgio in the Venetian lagoon.

“The scene is offensive and lacks any narrative context that would justify it,” said Father Gianmatteo Caputo, the patriarch’s official in charge of cultural heritage.

“Because it lacks context, what is being offered to viewers is more like a music video, filmed in a place which is important historically and for the monastic tradition of Venice.”

The former monastery had been “transformed into a stage for a coquettish and suggestive dance, performed beneath the supreme symbol of Christianity, the cross.”

The scene was not only offensive and profane but also gratuitously provocative, Father Caputo said.

The nine-episode HBO Drama is the latest project by the Italian director Paolo Sorrentino, whose film The Great Beauty won an Oscar for best foreign film in 2014.

Jude Law reprises his role from The Young Pope and plays Lenny Belardo, who as Pius XIII is the first-ever American pope.

The New Pope starts with him having fallen into a coma after a heart attack, with his followers praying for his recovery.

Amid the disarray and uncertainty, he is succeeded by Malkovich, playing the English cleric Sir John Brannox, as John Paul III.

It is an echo of the real-life situation of having two living popes in the Vatican – Pope Francis and Pope Emeritus Benedict XVI.

That unprecedented scenario is also the basis for the new film The Two Popes, starring Anthony Hopkins as Benedict, tottering on the brink of deciding to resign, and Jonathan Pryce as Jorge Mario Bergoglio, the Argentine who succeeded him as Pope Francis.