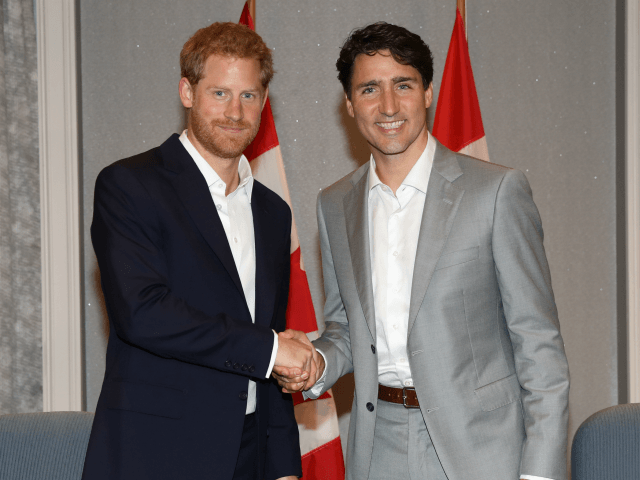 British media sources have claimed Canada’s Prime Minister Justin Trudeau has offered to pay £500,000 for the security of Prince Harry and his wife Meghan.

The report claims that the Canadian prime minister and Liberal party leader has offered to use Canadian taxpayer cash to fund half of the estimated one million pounds per year security costs of the Duke and Duchess of Sussex, who announced on Monday that they will be moving to Canada.

Following the report, however, Canada’s finance minister Bill Morneau told reports in Toronto that the government had not made any concrete plans for the royal couple yet, claiming “we haven’t spent any time thinking about this issue.”

“We obviously are always looking to make sure, as a member of the Commonwealth, we play a role,” he added.

Farage Says Prince Harry Has ‘Let the Side Down’, Compares Meghan to Wallis Simpson https://t.co/QWKxGjjOIa

On Monday, Her Majesty Queen Elizabeth II released a statement on the royal rift, claiming to support Prince Harry and Meghan’s choice to move to Canada and abandon their full-time public duties.

“Although we would have preferred them to remain full-time working Members of the Royal Family, we respect and understand their wish to live a more independent life as a family while remaining a valued part of my family,” the statement said.

Prince Harry and Meghan shocked many last week after the pair announced they would be transitioning to a more private life and did not want to be reliant on public money — although they are at the same time attempting to monetise their public position through their new “Sussex Royal” brand.

Many have been deeply critical of the move, pointing out that they did not inform Her Majesty before making a public statement on the matter.

Brexit Party leader Nigel Farage went as far as comparing the Duchess of Sussex to Wallis Simpson, the American divorcee whose relationship with King Edward VIII forced him to abdicate the throne.

People have had it with Prince Harry. https://t.co/uOwE0eU0S9

“All I can say is, I hope he’s going to be happy — because whenever I saw those photographs, or those films, of the [former king], living in the Bois du Boulogne with Wallis Simpson, he didn’t look very happy to me,” Farage said.

Members of Britain’s Armed Forces have also slammed the couple, with one “highly decorated” Army figure telling British media: “first and foremost Harry was a commissioned officer who pledged allegiance to the Queen, and the Queen is his grandmother, so when push comes to shove, Queen and country [should] come first.”