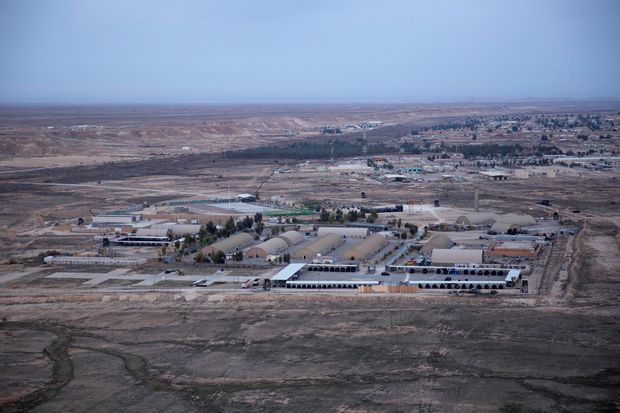 The Trump administration warned Iraq this week that it risks losing access to a critical government bank account if Baghdad kicks out American forces following the U.S. airstrike that killed a top Iranian general, according to Iraqi officials.

The State Department warned that the U.S. could shut down Iraq’s access to the country’s central bank account held at the Federal Reserve Bank of New York, a move that could jolt Iraq’s already shaky economy, the officials said.

Iraq, like other countries, maintains government accounts at the New York Fed as an important part of managing the country’s finances, including revenue from oil sales. Loss of access to the accounts could restrict Iraq’s use of that revenue, creating a cash crunch in Iraq’s financial system and constricting a critical lubricant for the economy.

to work toward the expulsion of the approximately 5,300 U.S. troops.

In response to the nonbinding resolution, which was backed by the prime minister, President Trump threatened to impose sanctions against Iraq if the U.S. was forced to withdraw its troops.

Mr. Abdul-Mahdi moved ahead with those plans this week, requesting the U.S. agree to talks to plan the safe withdrawal of American troops, according to an Iraqi description of a Thursday call with Secretary of State

Mr. Pompeo disagreed with Iraq’s version of his call with Mr. Abdul-Mahdi and said the U.S. would continue its Iraq-based campaign against the Islamic State extremist group. The State Department declined to comment on the U.S. warning to Iraq about its New York Fed account.

How do you expect the Iraqi government to respond to the Trump administration’s warning? Join the conversation below.

The warning regarding the Iraqi central bank account was conveyed to Iraq’s prime minister in a call on Wednesday, according to an official in his office, that also touched on the overall military, political and financial partnership between the two countries.

Spokesmen for the Iraqi prime minister, its central bank and its embassy in Washington didn’t respond to requests for comment. The U.S. State and Treasury Departments and the Federal Reserve Board declined to comment.

The Federal Reserve Bank in New York, which can freeze accounts under U.S. sanctions law or if it has reasonable suspicion the funds could violate U.S. law, said it doesn’t comment on specific account holders.

The potential economic and financial fallout is weighing on Iraqi officials as they try to address the presence of American troops without provoking a backlash. In recent days, Iraqi officials have stressed the need for friendly relations with the U.S., even as pro-Iranian militias and politicians exert pressure to expel American troops.

“Whenever you have any amicable divorce, you still have the worry about the children, pets, furniture and plants, some of which are sentimental,” said a senior Iraqi politician.

Mr. Abdul-Mahdi has said the departure of U.S. troops is the only way to avoid conflict in Iraq because the U.S. doesn’t trust the country’s security forces to protect its troops.

But there are questions over his authority to evict them, given his status as a caretaker prime minister. Among other potential obstacles are Kurdish and most Sunni leaders, who boycotted the session at which parliamentarians voted on the troop expulsion.

During the parliamentary debate, the speaker, a Sunni, urged Shiite lawmakers to be mindful of the potential backlash: “One of the steps the international community could take is to stop financial transactions with Iraq, and we would be unable to fulfill our commitments to our citizens at any moment,” Mohammed al-Halboosi said, based on a video of the proceedings viewed by The Wall Street Journal.

The financial threat isn’t theoretical: The country’s financial system was squeezed in 2015 when the U.S. suspended access for several weeks to the central bank’s account at the New York Fed over concerns the cash was filtering through a loosely regulated market into Iranian banks and to the Islamic State extremist group.

The prospect of sanctions has unsettled ordinary Iraqis, for whom memories of living under a United Nations embargo during the 1990s are still fresh. Pro-Iranian and other Shiite factions leading the charge to oust U.S. forces from Iraq have sought to reassure the public by telling them Iraq could pivot to China.

An adviser to the prime minister, Abd al-Hassanein al-Hanein, said that while the threat of sanctions was a concern, he did not expect the U.S. to go through with it. “If the U.S. does that, it will lose Iraq forever,” he said.

Besides the financial impact, many politicians, including some Shiites, worry that a U.S. withdrawal would allow Islamic State to re-emerge as a major threat. They also view the U.S. as a necessary counterweight to Iran, which has tightened its grip on the Iraqi government during Mr. Abdul-Mahdi’s premiership.

The U.S. is concerned that an exodus of American forces could allow U.S. currency to be redirected to Iranian accounts and to other adversaries, according to people familiar with the matter.

The Trump administration’s sanctions campaign against Iran has squeezed the flow of U.S. dollars to the government in Tehran over the past year. The American dollar, the most traded currency in the world, is used by Iran’s Islamic Revolutionary Guard Corps to pay its foreign proxies fighting against the U.S. and its allies in the region, including in Iraq, U.S. officials say.

Iranian-owned or controlled foreign exchange houses and banks in Iraq have been an important source of funding for Iran and its proxies active in the country, including those fighting against U.S. forces, U.S. officials say.

The New York Fed provides banking and other financial services for around 250 central banks, governments and other foreign official institutions, such as the account owned by Bangladesh from which North Korean agents were able to steal $81 million in 2016, U.S. officials have said.

When Iraq needs hard currency, its central bank can request a shipment of bills that it then distributes into the financial system through banks and currency exchange houses. While the country’s official currency is the dinar, U.S. dollars are commonly used.

The New York Fed doesn’t publicly disclose how much money it currently holds for Iraq’s central bank. But according to the Central Bank of Iraq’s most recent financial statement, at the end of 2018, the Fed held nearly $3 billion in overnight deposits.

Restricting Iraqi access to dollars could cause the dinar’s value to fall, as it did in 2015, which could again trigger a dash for dollars in Iraq as people, companies and banks try to secure hard cash. Such a devaluation could cause broader economic woes as it cuts spending power for workers, companies and the government.

—Courtney McBride in Washington contributed to this article.

Write to Ian Talley at ian.talley@wsj.com and Isabel Coles at isabel.coles@wsj.com