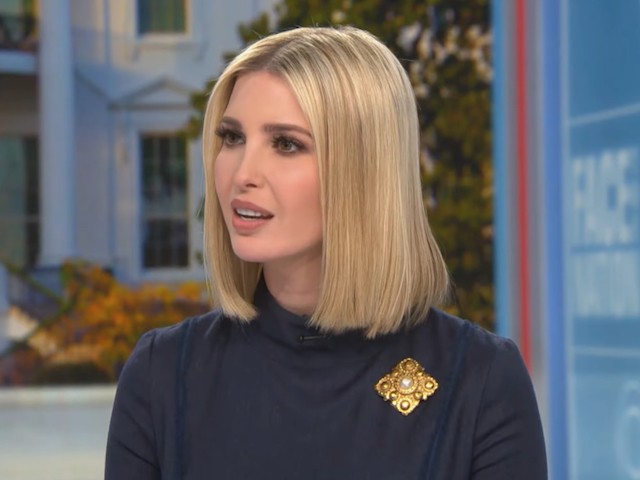 In a preview clip of an interview with CBS’s “Face the Nation,” White House adviser to the president and first daughter Ivanka Trump said her father President Donald Trump was both “energized and “angry” over impeachment.

MARGARET BRENNAN: Your father has now been impeached. He is now only the third U.S. president to go through this.

MARGARET BRENNAN: What has been the impact? Has he made peace with it?

IVANKA TRUMP: He’s energized, as are 63 million-plus voters who elected him to office. This is historic, as you note. And in many ways, including the fact that it is the first purely partisan impeachment. In fact, the only thing bipartisan was the vote against proceeding forward, which several Democrats came along to reject the articles, both that were introduced and- and that voted against last night’s vote. So, you know, what’s I think deeply unfortunate and disappointing is the amount of work that we could be doing to further the shared goals that we have and that the American people want us to be finding common ground on. If you think about this past week and what has been accomplished by this administration, despite unprecedented resistance and a climate of just tremendous raw politics, it’s been remarkable. From the passage of the defense bill, which secured for millions of Americans, paid family leave to the creation of space force to the largest pay raise for our service members in- in a decade. That plus USMCA plus tier one of the U.S. China trade deal. It is incredible. We passed permanent- permanent funding for HBCUs–

MARGARET BRENNAN: I’m surprised to hear you say energized because when I read the letter that your father sent to Speaker Pelosi, he seemed angry. And in fact, he wrote, you do not know, nor do you care the great damage and hurt you’ve inflicted upon wonderful and loving members of my family. Was that a reference to you?

TRUMP: I don’t think the words are mutually exclusive. You can be angry at a process that is unjust. And I think you heard from all the Republicans in the House yesterday, their anger, their disbelief that this process was proceeding forward when just several months ago, the speaker herself said she would not advance impeachment without bipartisan agreement and consent. So there is- there can be anger. Anger at the opportunity cost to the Americans we’re all here serving.

TRUMP: And what could have gotten done. Angry at the waste of time. Angry at the collateral damage. Angry, but it’s still energizing. And it focuses you on really and draws into relief the stark contrast in priorities.

MARGARET BRENNAN: When- when he–

TRUMP: –between Republicans and Democrats today, that could change in the future. But today, we are focused on delivering historic wins, and sadly we can’t define the priorities of anyone but ourselves. So we know what the White House is committed to doing, and we are delivering time after time.

MARGARET BRENNAN:  When he says damage and hurt, what is your- what is your dad’s mood right now? I mean, he’s talking about hurt to your family. Is that the way you feel it? Do you feel it in a personal way?

TRUMP: Well, I think you saw his mood last night, and so did everyone watching.

MARGARET BRENNAN: At the rally, you mean?

TRUMP: He said it didn’t even feel like he was being impeached. There is- there is tremendous energy on a side. Look, it is pretty unprecedented that support for impeachment has decreased over time as more information was presented to the American people. It’s decreased, not increased. So with all of this time spent, with all of these witnesses who didn’t have firsthand knowledge, with all of these people that have been paraded in front of the American people, support for this action has decreased. So, you know, I think he sees it for what it is, which is really just raw partisan politics.

MARGARET BRENNAN: You are an adviser to your dad.

MARGARET BRENNAN: It looks like this impeachment will head towards or at least, it’s supposed to head towards a Senate trial. Do you advise him on that? Do you think that this should be a trial with witnesses and new evidence?

TRUMP: I leave that to the lawyers in terms of procedurally how to- who- how to move forward.

MARGARET BRENNAN: You haven’t given your own advice?

TRUMP: I give him my perspective and opinion. But many people are very well-informed about process and how to move forward. And I would defer to them on that.

MARGARET BRENNAN: In your opinion, do you think he’s getting good counsel from Rudy Giuliani, the president’s personal attorney?

TRUMP: I know Rudy Giuliani in a very different context as one of the greatest mayors in the history of this country and- and a real hero in New York. So that is- that is the experience I’ve had with Rudy for a very long period of time. He’s smart and thoughtful and- and- and a real warrior and was a great- a great mayor.

MARGARET BRENNAN: I ask you about that, because, of course, it was his actions in Ukraine and the investigation and his continued claim that he is working on behalf of your father on these projects. And it’s created a lot of news, and new storylines that the White House has had to respond to that have only complicated in many ways moving on.

TRUMP: That’s your assessment. So, I don’t know that I want to validate that- that comment. It- it is what it is. We’re here. More than 50 percent of America thinks that we shouldn’t be in this position and that the president shouldn’t have been impeached. And we have the agreement of every single Republican member of Congress and a handful of Democrats as well. So the facts are there for- for the American people to assess and determine themselves.