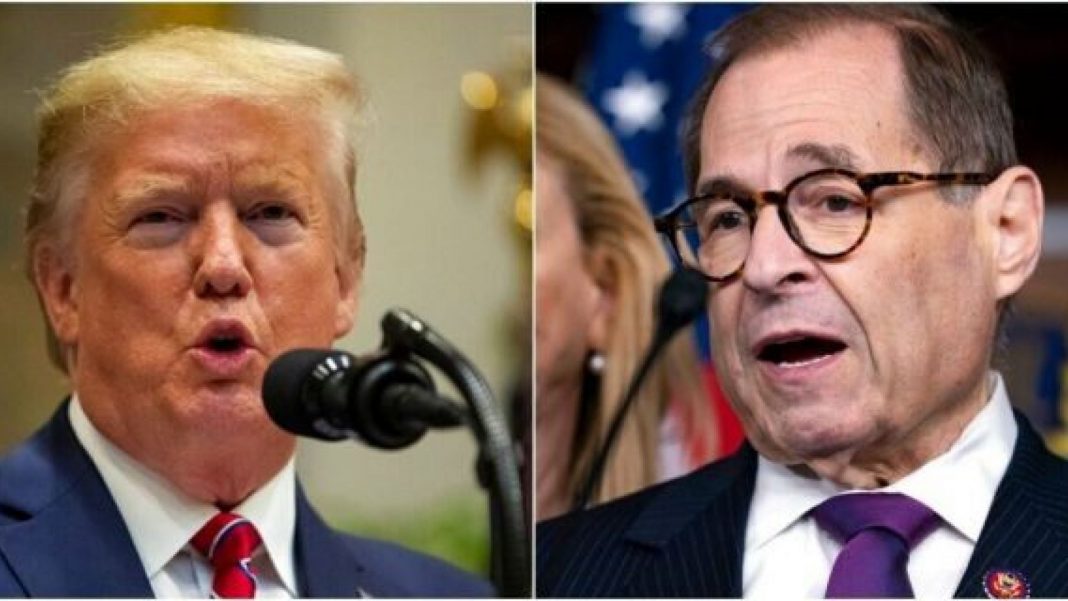 The majority wrote that President Trump abused his office by soliciting the interference of Ukraine in the 2020 election and then obstructed the impeachment inquiry into his conduct. The report was released at 12:30 a.m. ET., and included a dissent from the committee’s minority that called the case for impeachment “not only weak but dangerously lowers the bar for future impeachments.” Trump and the White House repeatedly have denied he did anything wrong.

Bolton and Mulvaney were among four new witnesses whose testimonies Democrats were seeking for the impeachment trial over President Trump’s actions toward Ukraine. In addition to Bolton and Mulvaney, Schumer said Democrats also wanted testimony from two other White House officials: Robert Blair, a top Mulvaney aide, and Michael Duffey, a budget official who was tasked with handling the Ukraine issue.

In the letter, Schumer proposed the structure for a “fair and honest” trial, in an attempt to launch negotiations ahead of House voting this week. The full Democrat-controlled House is widely expected to vote for an impeachment trial.

Under Schumer’s proposal, a trial would begin Jan. 7, with the swearing-in of Chief Justice John Roberts to oversee the proceedings and stretching for several weeks as Democrats subpoena witnesses and testimony. McConnell has signaled his preference for a speedy trial but also told Fox News’ Sean Hannity last week that there was “zero chance” Trump would be removed from office.

“What he’s reacting to is public polling that shows he can’t get renominated,” Nadler said Sunday on ABC’s “This Week.” “His electorate in his district is 24 percent to renominate him and 60 percent to nominate somebody else.”

Van Drew — who has spent months criticizing fellow Democrats for their push to impeach Trump — met with Trump on Friday to discuss going across party lines. He is one of only two Democrats who voted against opening an impeachment inquiry into Trump and has remained a fervent voice in opposition to impeaching the president.

Boeing considers halting or cutting back 737 MAX production: Report
Boeing may cut back or even stop further production of its 737 MAX jets as the airplanes’ future remains uncertain, The Wall Street Journal reported Sunday.

People familiar with the matter told the Journal that Boeing management is increasingly seeing a production pause as the best option, according to the report. But cutting production would increase Boeing’s cost per plane, and could even potentially bring about job cuts and furloughs that would affect the industry beyond Boeing. Click here for more.

Steve Hilton says Democrats hate the fact that President Trump is delivering concrete results for everyday Americans and are terrified that can’t beat him in a fair fight in next year’s election. That’s why we’re seeing their obsession with impeachment.

Fox News First is compiled by Fox News’ Bryan Robinson. Thank you for making us your first choice in the morning! Enjoy your day! We’ll see you in your inbox first thing on Tuesday morning.

Men should be allowed to donate sperm after death, study says

Day One of Senate Impeachment Trial of President Donald Trump