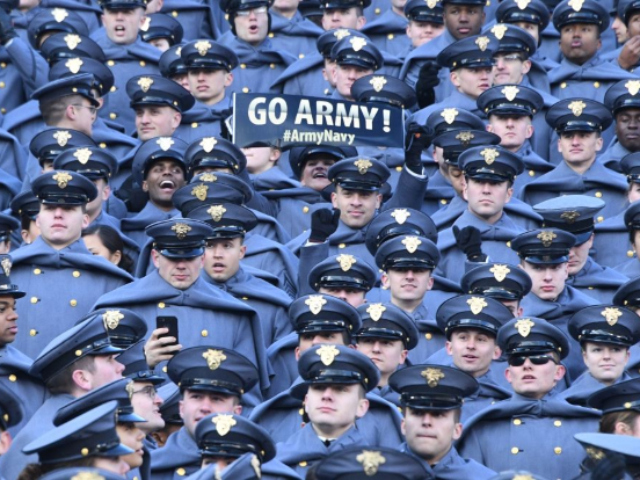 West Point has vowed to launch an investigation after several cadets and were seen flashing the OK hand sign during an ESPN broadcast of this weekend’s Army-Navy game.

“West Point is looking into the matter. At this time we do not know the intent of the cadets,” the academy said n a statement according to Philadelphia Inquirer.

The investigation was sparked after the game broadcast from Lincoln Financial Field in South Philly where several students were seen flashing the OK sign behind ESPN’s Reece Davis.

Extreme liberals such as Tariq Nasheed immediately began accusing the students of flashing a “white power” symbol and calling for the students to be thrown out of the academy without any investigation.

At the #ArmyNavy game today, several West Point students flashed the white power sign on live tv.. They did this because they fully understand that most people in the dominant society share their views, and there will be no serious punishment against them. pic.twitter.com/IBQEcqkTVM

Many on the internet are rightfully upset re what appears to be both Cadets & Midshipmen flashing white power signs.

I guarantee both USMA & USNA will investigate & discipline if appropriate.

If true, there are always some who find ways to tarnish reputations of organizations

So many white people on here are calling me the N word, and other awful things.

I am a strong black Muslim woman. Nothing can bring me down. I will always speak up against racism. 😊 https://t.co/WOAXZU3x8Z

Not everyone, though, was calling for the heads of the students. Former senior White House adviser Cliff Sims also jumped to Twitter writing, “Here we go again. This time it’s @ByMikeBrehm of @usatodaysports trying to ruin the lives of cadets for playing the circle game, because in some alternate reality they just MUST be white supremacists. At some point someone’s gotta bring a defamation case against these lunatics.”

Here we go again. This time it’s @ByMikeBrehm of @usatodaysports trying to ruin the lives of cadets for playing the circle game, because in some alternate reality they just MUST be white supremacists. At some point someone’s gotta bring a defamation case against these lunatics. https://t.co/2Y8iaB1kVw

Many others agreed with Sims that the media and the left-wing activists the media flogs are engaging in another witch hunt:

This is just idiotic. It’s a bunch of guys playing the circle game about 10 years after their friends all stopped. But ya, let’s make it out to be racist, since everything else you see and hear is as well https://t.co/0tcDjTZeDg

Good lord. They were playing the circle game. America has gone insane. pic.twitter.com/jixG99ftmX

Exactly. It does/means nothing. It’s not a real thing. You figured it out. https://t.co/wbWsW0CMCt

This is a warning to the media…

If you Convington the cadets, you will be held accountable in court in front of a jury and not in your comfortable, sympathetic blue enclave venue.

Do not participate in the defamation of these American heroes.@RonColeman @pnjaban @Barnes_Law

or another attorney who can fully vindicate a defamed plaintiff’s rights.