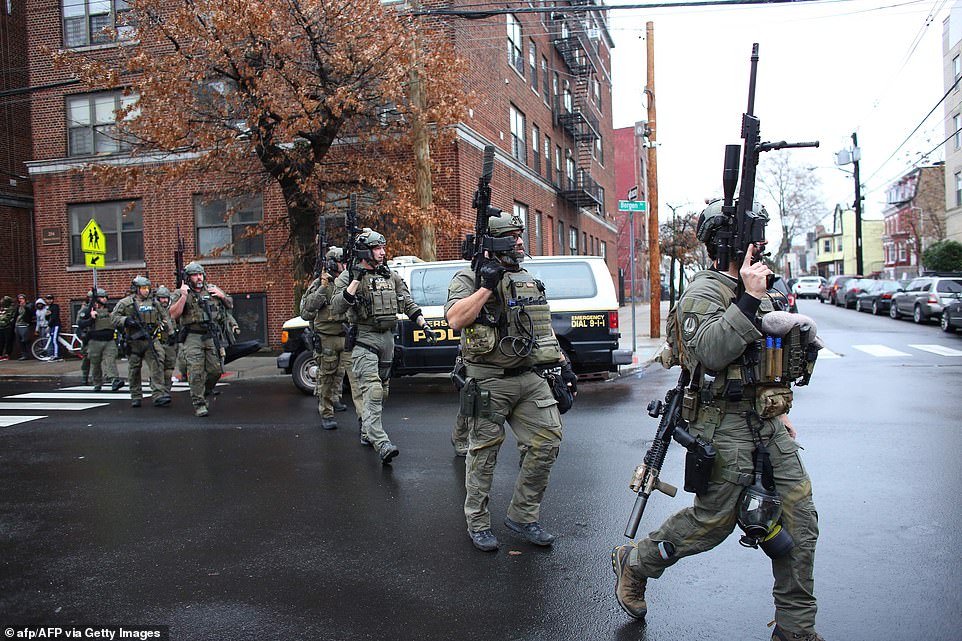 Six dead, including a cop, after ‘male and female shooter duo’ armed with long guns launch two-hour shootout against SWAT team, starting in a cemetery and ending inside a bodega as a ‘third shooter remains at large’

By Megan Sheets For Dailymail.com

Six people have been killed in an hours-long shoot-out in Jersey City after a male and female suspect launched two-hour gun battle with a SWAT team that reportedly began in a cemetery and ended with them being shot inside a bodega.

The Hudson County Prosecutor’s Office confirmed that one police officer was fatally shot and two others were wounded along with a civilian in the active shooter situation on Martin Luther King Drive on Tuesday afternoon.

An unnamed federal law enforcement source told Fox News that two juvenile suspects – one male and one female –  were shot and killed in a stand-off with police, along with three other people who were inside the bodega. A third suspect, described by the source as a black male wearing all black, is still at large.

Gunfire erupted outside the JC Kosher Supermarket just after 12pm as police officers reported over radio that two armed suspects armed with long guns had barricaded themselves inside and were shooting at anyone who approached the storefront.

The gunshots continued for the next two hours, according to witnesses, as a heavy police presence from local, state and federal law enforcement agencies flocked to the scene and 12 schools in the county were placed on lockdown. 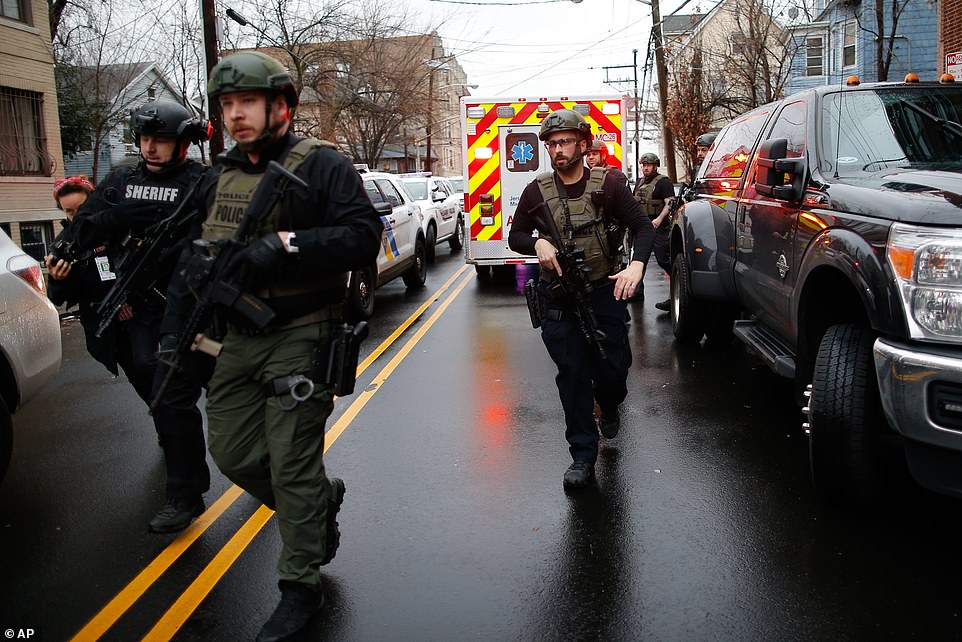 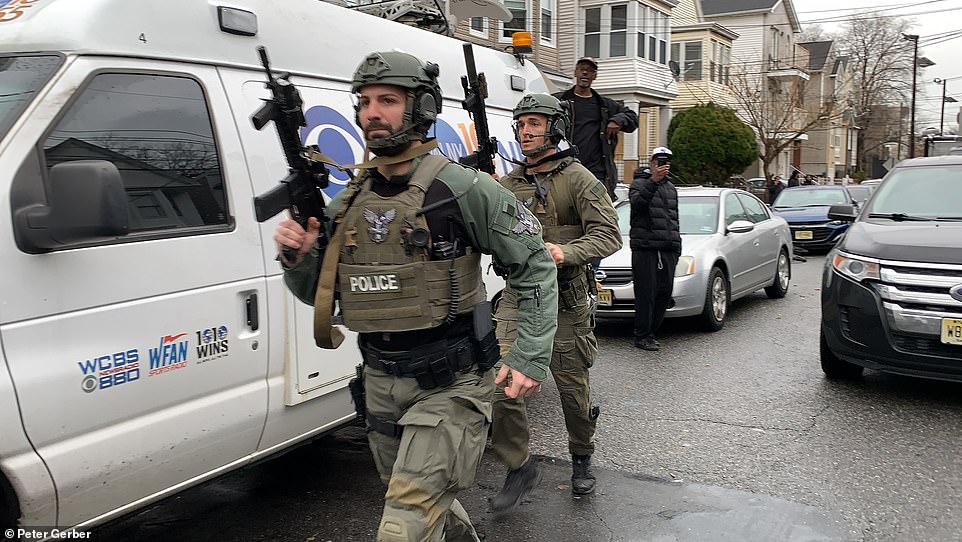 The gunshots continued for the next two hours, according to witnesses, as a heavy police presence from local, state and federal law enforcement agencies flocked to the scene 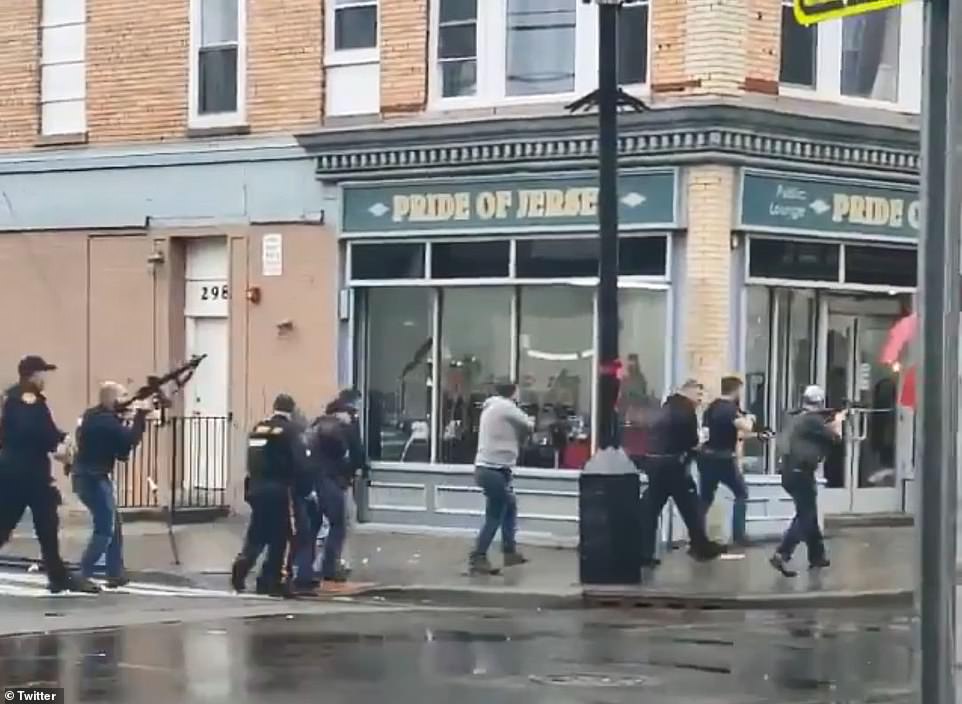 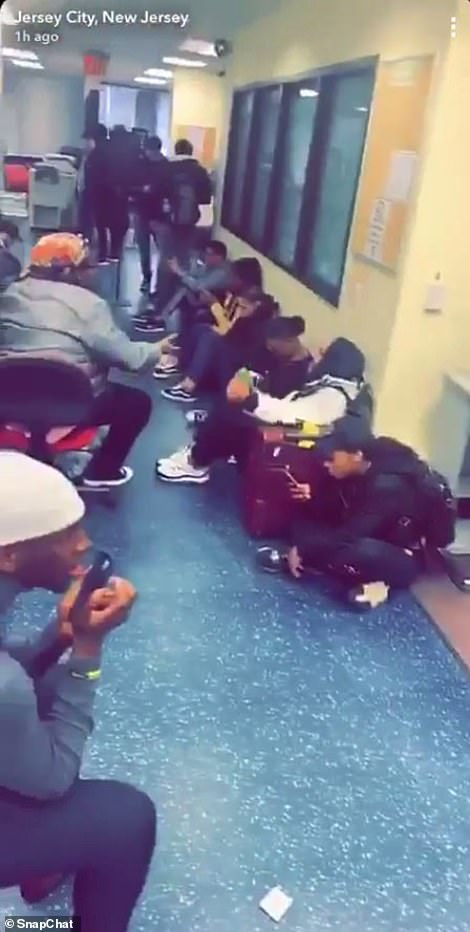 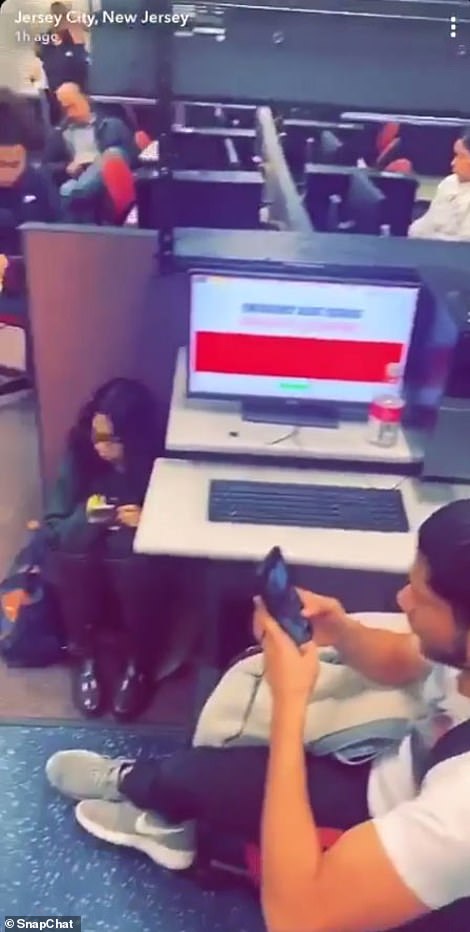 The Sacred Heart School, located across the street from where the shooting took place, was put on lockdown shortly after noon. Snapchat video from inside the school showed students sitting in the hallway and cowering under desks

WABC reported that the incident began at the Bay View Cemetery when at least one shooter opened fire on a police officer.

The outlet said that the shooter then fled into the bodega and began firing on responding officers as they surrounded the store.

NBC4 quoted Hudson County officials as saying that two officers had been shot, one in the head, in an ‘ambush’.

The outlet said the shoot-out began when an officer investigating a homicide approached the suspects and was then shot and killed as the suspects fled to the bodega.

Four other people were thought to be inside the bodega, but it wasn’t clear whether any of those four were hurt or considered victims or suspects.

The suspects are believed to have arrived in the area in a U-Haul, and police are now searching for the person who rented the vehicle. 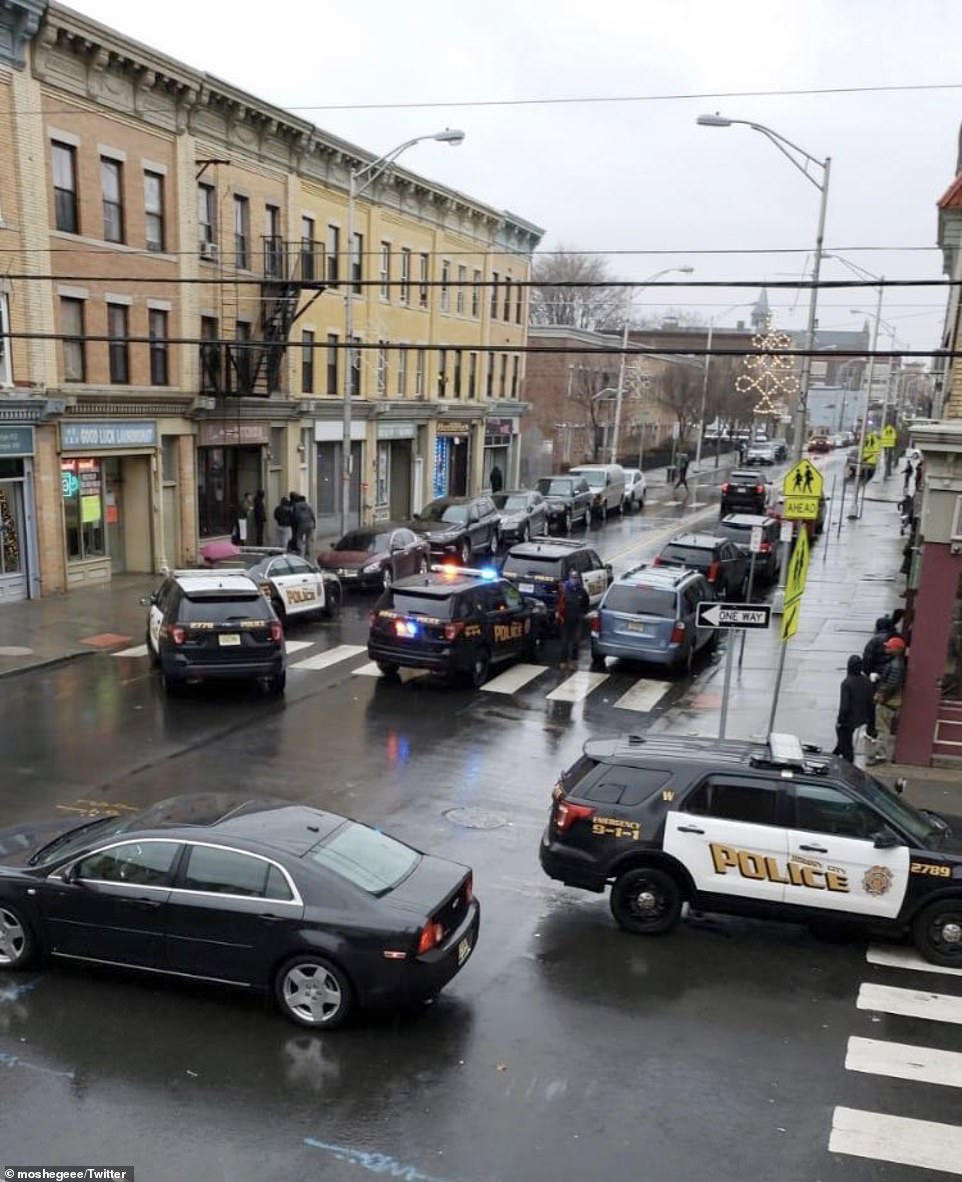 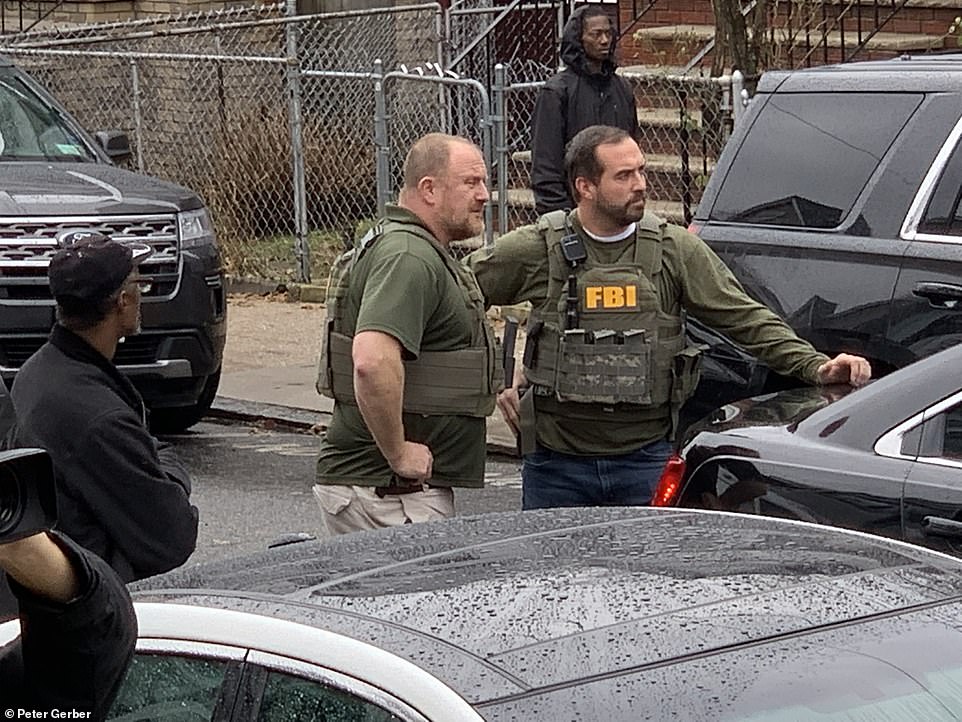 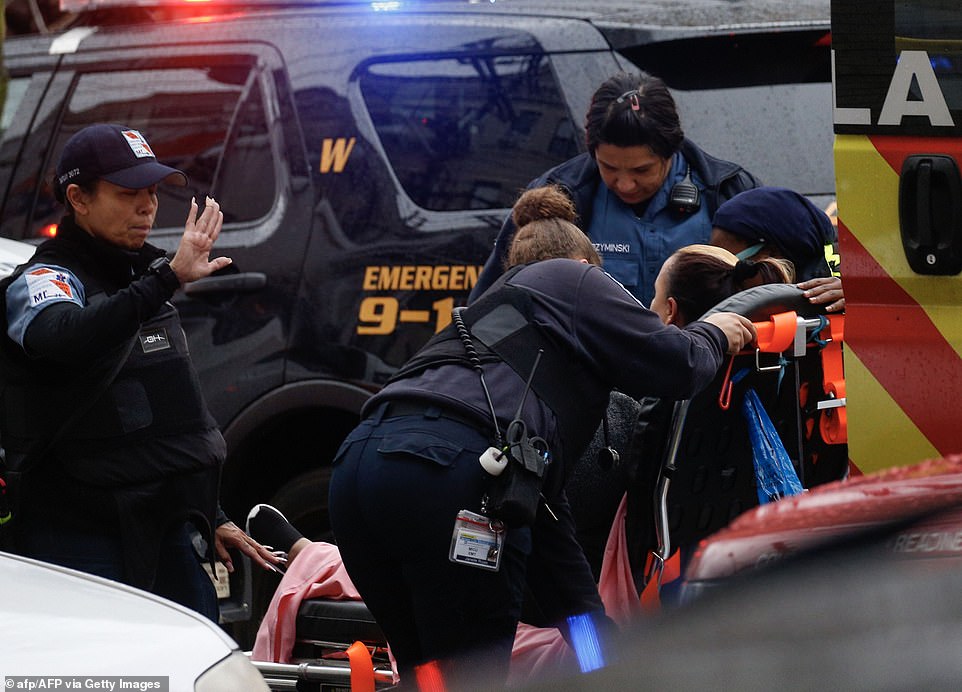 The Bureau of Alcohol, Tobacco, Firearms and Explosives responded to the scene, and the New York Police Department also sent emergency services personnel as its counterterrorism monitored the situation.

Police blocked off the area while dozens of bystanders stood around the perimeter and filmed the action on their cellphones.

Witness Brian Clark told CBS2: ‘I got caught in a one way street with a bunch of cars and I was wondering why nobody was moving. And all of a sudden I heard it. All the shots started. Shots started ringing out.

‘When I heard it, I see people running. I got out of the car and I see cops ducked down, and cops getting out of the way.

‘And I’m wondering why, what the hell? So I get out of my car and I see it, and I heard it – pow pow pow pow pow – then I realized I was in a shootout. I never heard that many shots in my life. It was like I was in a war zone.’

Andy Patel, works at a liquor store about three blocks away from the site of the shooting, told the Associated Press there had been consistent gunfire for at least an hour.

‘I can hear the gunshots. It’s like firecrackers going off,’ Patel said. ‘They were shooting like crazy about an hour ago. Then it stopped for like 20 or 30 minutes. The cops were clearing everyone off the streets.’ 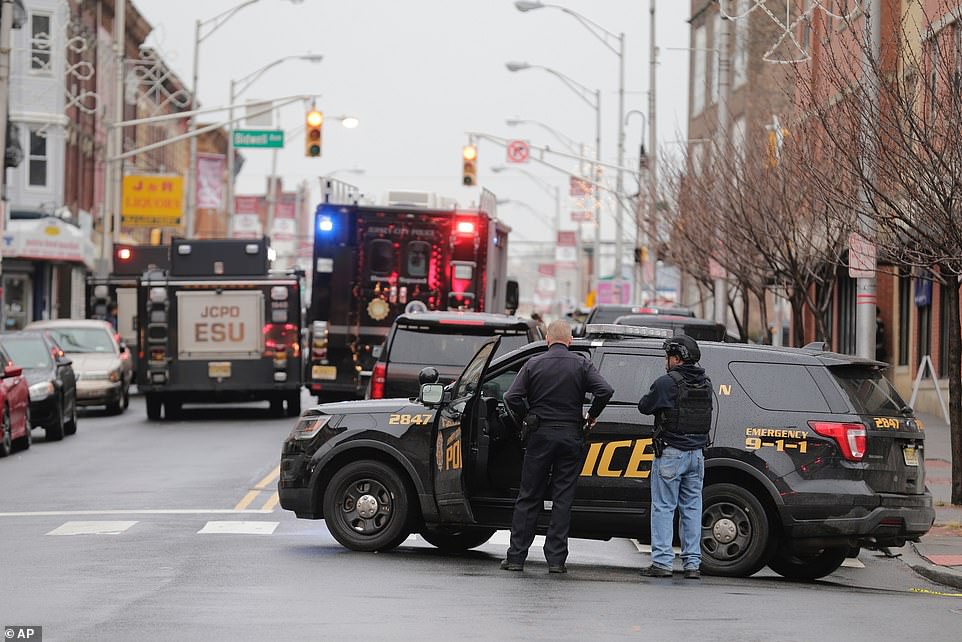 Martin Luther King Drive was blocked off in both directions

New Jersey Governor Phil Murphy tweeted that he had been briefed on the unfolding situation.

‘Our thoughts and prayers are with the men and women of the Jersey City Police Department, especially with the officers shot during this standoff, and with the residents and schoolchildren currently under lockdown,’ Murphy wrote.

The Sacred Heart School, located across the street from where the shooting took place, was put on lockdown shortly after noon.

Snipers were later seen on the roof of the building.

Jersey City Board of Education President Sudhan Thomas confirmed that both Lincoln and Snyder high schools are on lockdown, as well as Schools 12, 14, 29, and 41.

White House spokesman Hogan Gidley said President Donald Trump had been briefed on the shooting and was monitoring it.

This is a developing story.