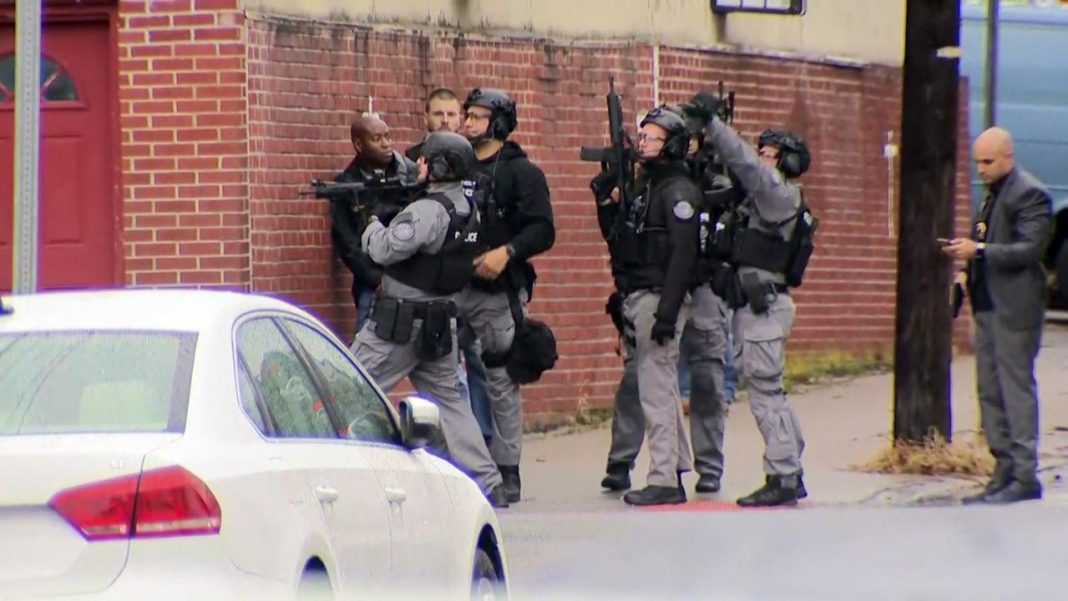 Jersey City Mayor Steven Fulop said police have found “multiple deceased” in a building police swarmed during the shootout, but did not provide specifics. Police had surrounded the building with heavily armed officers and armored vehicles.

One of the injured officers had been shot in the shoulder and two others had shrapnel injuries. A civilian was also injured.

Just provided a brief update to press as scene is still active but secure. 2 officers struck by gun fire. One of the officers tragically has given his life. 2 other officers receiving medical treatment at the jcmc for injuries unrelated. Please keep these officers in your prayers

Police initially said they were searching for two shooters, a man and a woman. Jersey City Director of Public Safety James Shea said they did not believe the incident was terror-related.

Fulop said the gun battle encompassed two scenes, one in a cemetery and another in a corner store. CBS News has learned that the incident began in the Bay View cemetery, where police officers encountered two people who they thought were suspicious. The duo then got into a U-Haul and drove to the store, CBS News has learned.

One more video from earlier. We have not heard any shots in quite some time now @CBSNewYork Jersey City pic.twitter.com/1V1U3HjpJ9

Dozens of shots could be heard going off as police engaged the suspects in the vicinity of Martin Luther King Drive and Bayview Avenue. The incident started at roughly 12:45 p.m.

“I got caught in a one way street with a bunch of cars and I was wondering why nobody was moving. And all of a sudden I heard it. All the shots started. Shots started ringing out. When I heard it, I see people running. I got out of the car and I see cops ducked down, and cops getting out of the way,” witness Brian Clark said.

“And I’m wondering why, what the hell? So I get out of my car and I see it, and I heard it – pow pow pow pow pow – then I realized I was in a shootout. I never heard that many shots in my life. It was like I was in a war zone,” Clark added.

“We were ready to take lunch and all of a sudden we heard a lot of gunshots,” a witness named Carlos told CBS2’s Alice Gainer. “I heard over 200 gunshots fired.”

“I have been briefed on the unfolding situation in Jersey City. Our thoughts and prayers are with the men and women of the Jersey City Police Department, especially with the officers shot during this standoff, and with the residents and schoolchildren currently under lockdown,” Gov. Phil Murphy wrote on Twitter.

I have every confidence in our law enforcement professionals to ensure the safety of the community and resolve this situation. Today reminds us of their bravery and the sacrifices they, and their families, make for our communities.

“I have every confidence in our law enforcement professionals to ensure the safety of the community and resolve this situation. Today reminds us of their bravery and the sacrifices they, and their families, make for our communities,” Murphy wrote.

The President has been briefed on the shooting in Jersey City and continues to monitor the situation.

President Donald Trump has also been briefed on the situation.

South district Jersey City schools were placed on lockdown. Jersey City Mayor Steven Fulop wrote on Twitter “all the schools in the area are secure and all children are accounted for.”

Jersey City Medical Center was placed on lockdown due to the shooting.

New Jersey Transit Police reported Hudson Bergen Light Rail was suspended in the area, along with all bus service on the West Side Branch. New Jersey Turnpike exit ramps at Interchange 14B were closed because of the incident.

Today is a horrific day. Officers have come under attack and we have several wounded. Our hearts are heavy and the violence is not over.

“Today is a horrific day. Officers have come under attack and we have several wounded. Our hearts are heavy and the violence is not over,” the New Jersey State PBA tweeted. “We need prayers.”

Check back soon for more information on this developing story.