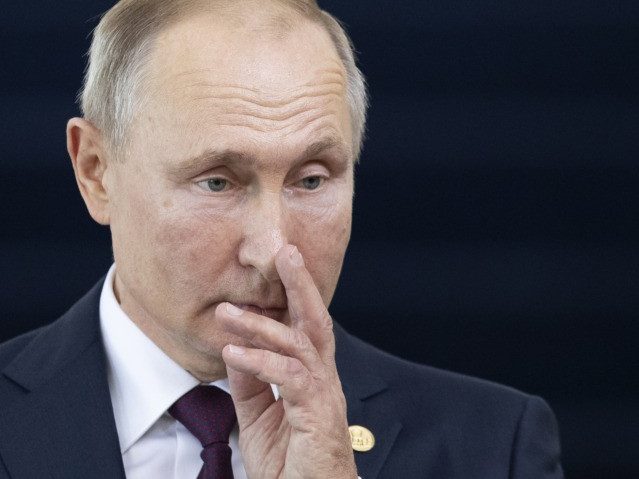 Police in Siberia’s Yakutia region on Tuesday arrested Aleksandr Gabyshev, a shaman who had announced his intention to march on Moscow and “drive [Russian President Vladimir] Putin out of the Kremlin.”

According to Radio Free Europe, Gabyshev’s march at the time of his arrest consisted of himself, two followers, and four Siberian Laika dogs. The police did not state exactly why they decided to take Gabyshev into custody.

He was arrested once before in September, accused of “inciting extremism among Russian citizens,” and remanded to a clinic for psychiatric care. Accusations of inciting extremism still appear to be pending against him, although he has not been formally charged. His lawyers have fought to avoid a court ruling that could see him committed to an institution for long-term treatment, while his followers vigorously insist he is of sound mind.

Gabyshev and his hardy little band managed to walk over 2,000 kilometers over the past nine months, an impressive demonstration of resolve given the temperature in that part of Siberia is currently hovering around -44 degrees. When he set out for Moscow, he estimated it would take him two years to complete the journey – and that was before the authorities flew him back to his native Yakutia after his September arrest.

At one point over the summer, Gabyshev was able to get about 700 people marching behind him under a banner reading “Russia Without Putin!”

“God told me Putin is not a human, but instead a demon and has ordered me to drive him out,” the shaman explained on that occasion. “An exorcism must be done.”

At another point on his long journey, Gabyshev was confronted by a group of other shamans who told him to stop calling for the overthrow of the Russian government. Accusations that he is forming a cult and abusing its resources have swirled around him, some of them leveled by disillusioned former supporters.

The shaman has become something of a Siberian YouTube sensation and a symbol for rural Russian discontent with Putin’s administration. Sizable protests were held after his first arrest, which supporters and some international human rights groups described as unnecessarily brutal, leading to further public anger after a police crackdown.

Gabyshev has also publicly called on Putin to resign, assuring the Russian president that if he vacates the Kremlin, “No one will touch you, not a single hair will fall from your head, and not a single drop of blood will be spilled.”

“Political life will begin to seethe. It’s already seething,” he said in October, signaling his awareness of his growing status in the popular imagination. “Before, people were in fear, but they have tasted freedom. And that’s an irreversible process.”

Foreign Policy suggested in November that the Kremlin is legitimately worried about Garbyshev, given the rising popularity of long-suppressed shamans in Siberia and the growing appetite of the general Russian public for flamboyant symbols of opposition to the unpopular central government.

Shamanistic traditions remain appealing to many Russians even as the Orthodox religious revival under Putin continues. Even in the big Russian cities, people will listen to criticisms from a Siberian shaman that they would ignore from opposition politicians or foreign critics of Putin.

“To be sure, few people in a big cosmopolitan city like Moscow would think much of magic. But, for the most part, Putin’s base doesn’t live in Moscow. The 86 percent of Russian voters who comprise his supporters live outside the city’s pro-Western confines, and many of them believe deeply in what Gabyshev represents,” Foreign Policy noted.