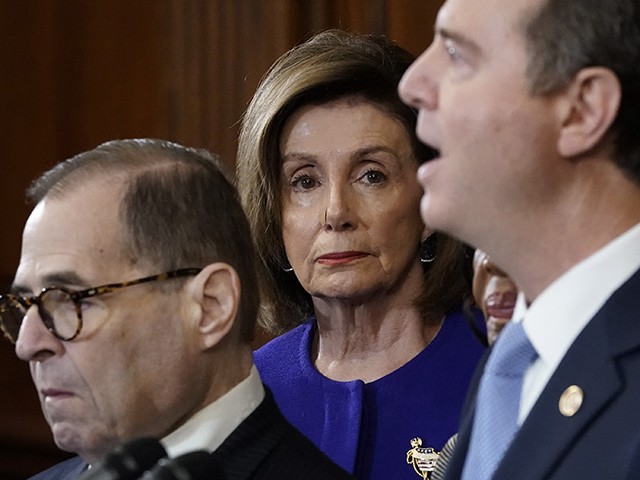 “It’s a sad day actually, a solemn day,” Pelosi said at the “Women Rule Summit” hosted by Politico in Washington, DC. “It’s something that no one comes to Congress to do, to impeach a president.”

When questioned about why the Mueller report findings were not included in the articles of impeachment, Pelosi gave a seemingly agitated response.

“I wish everyone just focused on what we are bringing forward because this is very serious violations of our constitution, undermining the national security of the United States, jeopardizing the integrity of our elections,” she said. “Instead of talking about what isn’t, this is what is, and that’s how we’re moving forward.”

Pelosi also said she is “not worried,” adding that the impeachment process against President Trump is about “patriotism” rather than “elections,” as Schiff had claimed on Tuesday.

“We take an oath to protect and defend. If we did not do that, we would be again delinquent in our duties. So this isn’t about elections, it’s about the Constitution,” Pelosi said.

Speaker Nancy Pelosi: “We take an oath to protect and defend. If we did not do that, we would be again delinquent in our duties. So this isn’t about elections, it’s about the Constitution. … This is about patriotism” https://t.co/JNZoJjWTJ8 pic.twitter.com/jDxTGPlmBJ

“This isn’t about politics,” she added. “This is not about Democrats or Republicans. … This is about patriotism.”

In contrast, Schiff’s remarks Tuesday morning suggested that Democrats must impeach President Trump in order to stop him from winning the presidency again in 2020.

Democratic leaders unveiled two articles of impeachment against the president: abuse of power and obstruction of Congress. Pelosi quickly shooed her colleagues away from the press conference, avoiding any questions from journalists.