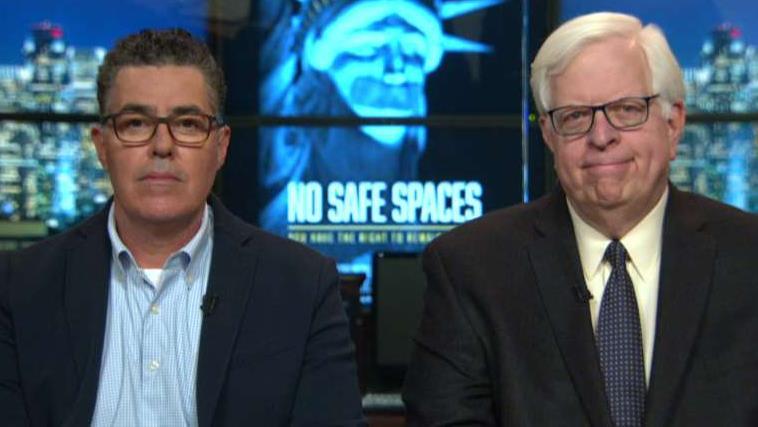 Police officers responded to a call on Friday when Adam Carolla and Dennis Prager’s free speech film, “No Safe Spaces,” was allegedly interrupted by two masked men who some customers felt were looking to intimidate moviegoers.

The filmmakers are chalking up the incident to evidence as to why the movie is important in the first place.

The La Habra, California police department sent officers to the local Regal Theater after receiving a call that two male subjects who entered the movie theater for the 1:10 p.m. showing had covered their faces with bandanas.

“After all of the previews and ads were over and the movie was just starting, two thugs sporting hoodies, masks, sunglasses and carrying huge duffel bags ran, not walked, up the aisle and sat at the back of the theater right behind us. They looked like bank robbers, home invasion criminals… they were trying to act scary,” a moviegoer named Vanessa, who asked for her last name not be used, told Fox News.

DENNIS PRAGER: ‘NO SAFE SPACES’ SHOWS THE LEFT AS ‘A PURELY DESTRUCTIVE FORCE’

“As you can imagine, I was nervous that they were planning something even more nefarious than just visual intimidation,” Vanessa said.

Vanessa and other moviegoers complained to the theater and called the police. She said she was issued a refund and left.

“When the manager went in to check on them they had removed all intimidating items. They knew what they were doing,” Vanessa said. “Potential criminals got to stay while we had to leave because we were afraid they might do something violent. My son did not want to leave because he didn’t want them to succeed in their plan of intimidation and free speech suppression. But I told him a movie was not worth our lives in case they had weapons or something.”

The La Habra police department confirmed to Fox News that they arrived on the scene after receiving a call about two men interrupting the film, but said no incident report was made. It’s unclear if the alleged troublemakers were trying to purposely disrupt the pro-free speech film for political reasons.

“They came full sprint to the top of the theater with bandanas on their face,” another attendee, Scott Stroud, confirmed to Fox News.

Stroud said that he pressured management to call the police, and they eventually obliged after initially downplaying the situation and assuring that the backpacks of the men were searched. Stroud said he explained the subject matter of the movie to theater workers in an effort to be taken seriously.

Stroud said police told him theater management didn’t think it was necessary to investigate further, but he disagrees.

“Common sense says you would want to question them,” Stroud said.

The La Habra police department declined to say why a report wasn’t filed.

“This story is quite angering, and an example of what is happening increasingly in America. I urge Americans to be courageous. It took courage for us to make this movie and now, apparently, it’s going to take courage for Americans to watch it,” the film’s producer Dennis Prager told Fox News. “America is the safe space in which we are supposed to be free to hear different ideas, including the ideas in this film, without fear of reprisal, and certainly without fear of physical harm.“

The documentary, which Prager has called a “wake-up call” to the American people, focuses on free speech being restricted to satisfy political agendas.

“If I know anything about my fellow Americans, it is that we are not easily frightened by thugs. I urge America to reject the fear that these incidents are designed to engender; be courageous, and go see our movie in a theater. This incident is exactly why this movie is so important,” Prager said.

A rep for the film told Fox News that the people affected have been given tickets to another screening.

“We were very disappointed to hear that our fans were subjected to this and have asked our partners at Regal to look into the matter. We’re also asking the police department for a full investigation,” said Alfred Hopton, publicist for “No Safe Spaces.”

“We know that Regal values our fans as much as we do and that they share our view that people should be able to enjoy a movie without feeling that they are in danger of being physically harmed.”

Regal did not immediately respond to a request for comment.

“We trust that nobody will be intimidated by events like this and we’re confident that all of our theatrical partners will continue to make sure that all steps are taking to ensure the physical safety of our moviegoers,” Hopton added.