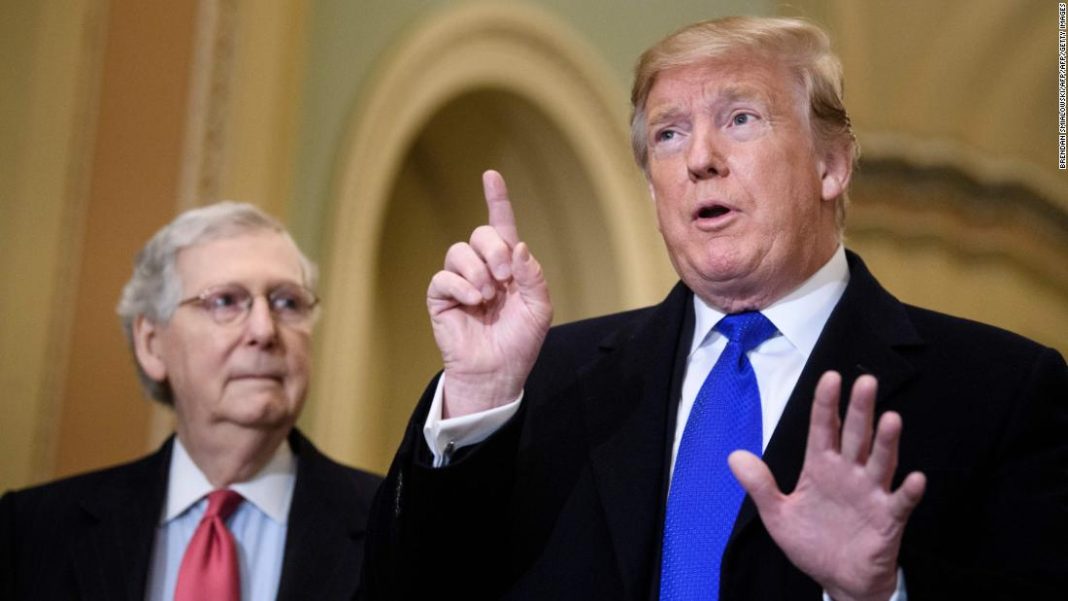 Facebook
Twitter
Google+
Pinterest
WhatsApp
In conversations with the White House, the Kentucky Republican has made clear he hopes to end the trial as soon as he can, an effort to both get impeachment off his lap and protect his conference from potentially damaging votes should the process break out into partisan warfare. That will include a continuous whip count until McConnell feels he has the votes to acquit the President and end the show. He has even floated a 10-day minimum during these talks, one person said.

But the show is exactly what Trump wants. He’s made clear to advisers privately that rather than end the trial as quickly as possible, he is hoping for a dramatic event, according to two people familiar with his thinking. He wants Hunter Biden, Rep. Adam Schiff and the whistleblower to testify. He wants the witnesses to be live, not clips of taped depositions. And he’s hoping to turn it into a spectacle, which he thinks is his best chance to hurt Democrats in the election.

People close to the President say this is because he has been sitting back and watching as current and former aides testified for hours before lawmakers about his behavior that they described as inappropriate, problematic and potentially dangerous.

Infuriated, Trump has been told he will have his day to defend himself soon, one person said.

Both the White House and McConnell’s office declined to comment.

Speaking to reporters Tuesday, McConnell said he did not foresee the Senate taking up the impeachment matter before the holidays — meaning the trial is likely to begin early next year.

He said a decision on hearing from witnesses live, as opposed to on taped depositions, would come after hearing the opening argument in the matter.

Any difference of strategic opinion is as much a reflection of the fluid nature on what a Senate trial will entail, multiple people involved said. McConnell himself has repeatedly said publicly that at this point, there simply isn’t an answer as to the length, structure or potential witnesses until the House moves further along with its articles of impeachment. For the moment, these people say, ideas or specific positions on how a trial should go are just that: ideas and opinions. The final form will likely be dictated by where McConnell’s 53-member conference stands on the issue in the weeks ahead.

McConnell is also planning to meet with Senate Democratic Leader Chuck Schumer at some point soon to see if a bipartisan resolution laying out the rules of the road — akin to what was agreed to during President Bill Clinton’s impeachment trial — is possible. Such a resolution might address many of the elements that remain clear unknowns at the moment.

But Trump’s position is the opposite of what some Republican senators, including some of Trump’s closest allies on the Capitol Hill, are advising at this point. In closed-door meetings and phone calls over the course of the last month, several Republican senators have warned Pat Cipollone, the White House counsel, not to “turn the Senate into a circus,” according to one Republican senator. A source familiar with the matter said there was no daylight between Trump and Cipollone on the trial.

Instead, there has been a concerted push to allow both sides — the House Democratic managers and the White House defense team — to present their case, then quickly move to a vote to end the proceedings. It would give enough time for moderate Republicans to see it as a fulsome and fair process, while shielding the conference from divisive votes on potential witnesses, one person involved with internal GOP discussions said.

After House Democrats unveiled two articles of impeachment against Trump on Tuesday, White House press secretary Stephanie Grisham said the move “does not hurt the President, it hurts the American people, who expect their elected officials to work on their behalf to strengthen our Nation.”

“The President will address these false charges in the Senate and expects to be fully exonerated, because he did nothing wrong,” Grisham added.

While it was initially unclear if that meant Trump himself wanted to testify, a White House source familiar said the line was intended to convey that the President’s case will be made through his lawyers. This person said there aren’t plans as of now for Trump to play a direct role.

“Read the Transcripts! ‘us’ is a reference to USA, not me!” Trump claimed.