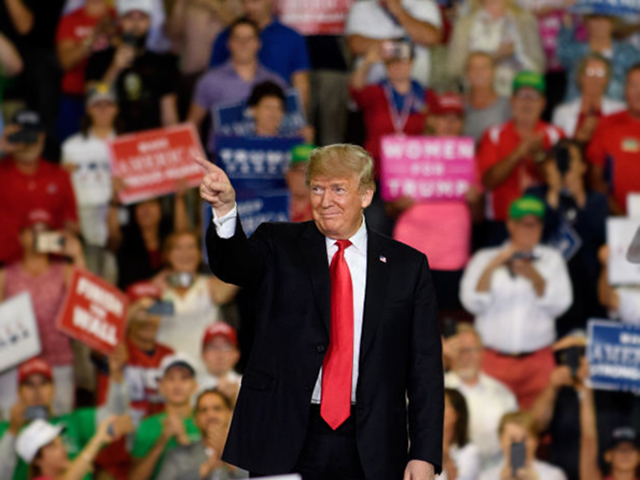 Two of them already voted against the partisan impeachment push by their own party’s leadership and are expected to again, but the fate of articles of impeachment rests in the hands of the 31 Democrats who represent districts won by President Donald Trump in 2016.

The two Democrats who voted no on the partisan impeachment inquiry authorization vote—Reps. Jeff Van Drew (D-NJ) and Collin Peterson (D-MN)—are expected to again join all Republicans in the House in opposing the partisan articles of impeachment vote when it does come to the floor.

The looming question, however, is whether they will be joined by other Trump district Democrats, and if so, how many will join them. No other so-called moderate Democrats have publicly announced their intentions to oppose the articles of impeachment vote on the floor of the House, but Politico reported on Tuesday that a group of ten to 12 of them are circulating a plan to censure Trump instead of impeaching him—an alternative option they hope will make them look more reasonable than the highly partisan forces driving their party towards a highly partisan impeachment vote.

“A small group of vulnerable House Democrats is floating the longshot idea of censuring President Donald Trump instead of impeaching him, according to multiple lawmakers familiar with the conversations,” Politico’s Sarah Ferris and Melanie Zanona reported on Tuesday. “Those Democrats, all representing districts that Trump won in 2016, huddled on Monday afternoon in an 11th-hour bid to weigh additional — though unlikely — options to punish the president for his role in the Ukraine scandal as the House speeds toward an impeachment vote next week. The group of about 10 members included Reps. Josh Gottheimer (D-N.J.), Kurt Schrader (D-Ore.), Anthony Brindisi (D-N.Y.), and Ben McAdams (D-Utah.).”

The list of 31 Democrats who represent districts Trump won in 2016 is as follows:

Given the fact that zero Republicans are expected to vote for articles of impeachment against Trump in the House of Representatives, and no Republicans are expected to vote for conviction in a Senate trial that House passage of impeachment would force, the move by House Democrat leaders remains hopelessly partisan and destined to fail. In the U.S. Senate, Democrats would need to flip at least 20 Republican senators—they currently have zero and there is no indication any Republicans would join them—assuming they hold all 47 Democrats in the Senate conference together, which is not a foregone conclusion by any stretch as Breitbart News has reported that several Senate Democrats are not yet on board with voting to convict Trump.

That’s why the possibility of a censure vote instead of articles of impeachment is particularly appealing to many of these vulnerable Democrats. What’s even more interesting about that possibility that Politico reported is that while most of the names of members they put forward as involved in seeking the alternative to impeachment—Gottheimer, Brindisi, and McAdams—are from districts that Trump won, Rep. Kurt Schrader (D-OR) represents a district that failed 2016 Democrat presidential nominee Hillary Rodham Clinton won in 2016. Rated even by the Cook Political Report’s Partisan Voting Index, Schrader’s 5th Congressional District in Oregon is one of many battleground House seats currently represented by Democrats outside of that core 31 districts that Trump won in 2016. That second rung of approximately 20 or so more Democrat seats also appears uneasy with moving forward on articles of impeachment, which could complicate things even more for Democrat leaders as they rush to try to impeach Trump before Christmas.

Schrader publicly spoke out in favor of the alternative to impeachment using censure instead, too, telling Politico he thinks it might actually be bipartisan.

“I think it’s certainly appropriate and might be a little more bipartisan, who knows,” Schrader said of a censure resolution instead of impeachment. “Time’s slipping by.”

Since Van Drew and Peterson are likely to still oppose impeachment when the final vote comes to the floor, and former Republican Rep. Justin Amash (I-MI)–who left the GOP to become an independent over impeachment–is likely to vote for impeachment, Democrats only afford to lose 17 more Democrats and still be able to pass the articles of impeachment. With four vacancies, legislation can pass the House–with all members present and voting–with 216 votes. That means if 17 of the remaining 29 Trump district Democrats join Van Drew and Peterson–or other vulnerable Democrats from Clinton-won districts like Schrader join enough of the Trump-won district Democrats to total 17 more defections–then Democrats could fail on impeachment on the floor of the House.