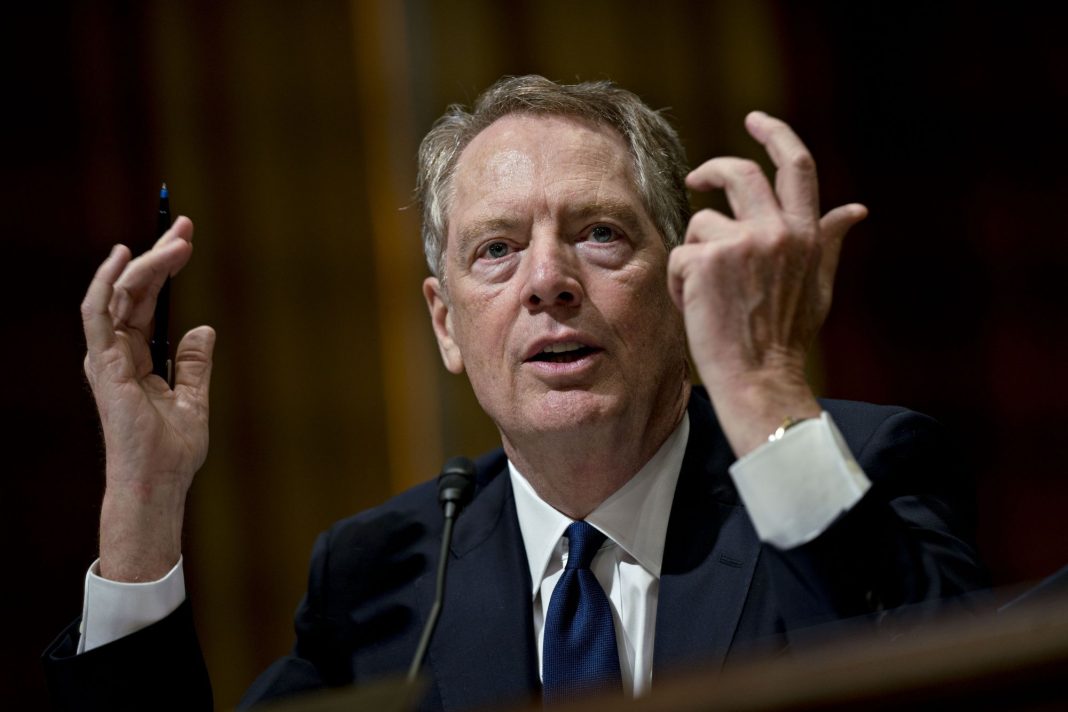 USTR Robert Lighthizer said the agency is also exploring whether to open investigations into similar digital taxes by Austria, Italy and Turkey. The move comes hours after President Donald Trump announced a barrage of other tariffs on steel and aluminum from Argentina and Brazil.

“USTR’s decision today sends a clear signal that the United States will take action against digital tax regimes that discriminate or otherwise impose undue burdens on U.S. companies,” Lighthizer said in the statement. “The USTR is focused on countering the growing protectionism of EU member states, which unfairly targets U.S. companies.”

The tariffs would be imposed after a public comment period concludes in early 2020 and interested parties have a chance to weigh in on the proposed duties.

Trump in August suggested tariffs of up to 100% on French wine and told aides that while he’s not generally empathetic with U.S. tech companies, he believes it should be the U.S. — not any other country — that taxes them, people familiar with internal deliberations said.

In the statement Monday, USTR said the proposed action includes “additional duties of up to 100% on certain French products.”

Sparkling wine, cheeses, handbags and makeup are on the list of potential tariff targets, according to the notice. An official at the French Finance Ministry declined to comment and said Minister Bruno le Maire would speak on the matter Tuesday.

The U.S. move is a setback for efforts to stop a conflict over digital tax from intensifying. President Donald Trump and France’s Emmanuel Macron agreed in August to try to find a compromise, but a 90-day deadline for talks expired last week without a resolution.

The U.S. tariffs and the French tax are likely to be a priority during a meeting between Trump and Macron on Tuesday, on the sidelines of a NATO conference in London.

Macron argues that moving ahead with a tax on tech companies is necessary because the structure of the global economy has shifted to one based on data, rendering current systems archaic. His government is trying to use France’s national tax as a bargaining chip, saying it would withdraw it if there is agreement on an international solution — in talks under the stewardship of the Organization for Economic Cooperation and Development.

There were signs of progress in recent weeks when the OECD proposed a “unified approach” to merge proposals that differed over whether to single out digital companies or have a broader approach. But French Finance Minister Le Maire said ahead of the USTR announcement that the U.S. has backed off from supporting an OECD compromise.

“They’ve said they aren’t sure they want a solution at the OECD,” Le Maire said on radio station France Inter. “We will never abandon our will to tax digital giants in a fair way.”

“We encourage other member states considering similar actions to work within the OECD framework toward a comprehensive solution,” they said.

The Internet Association, which represents tech companies, said France’s levy is “one of a growing number of concerning unilateral tax regimes around the world,” and advocated for a global solution in response to the announcement.

France’s tax, retroactive to January, affects companies with at least 750 million euros ($830 million) in global revenue and digital sales of 25 million euros in France. While most of the roughly 30 businesses affected are American, the list also includes Chinese, German, British and French companies.

The French government says it’s urgent to overhaul tax rules because the average tax rate for digital companies in the European Union is only 9.5%, compared with 23.2% for other companies.

An attempt to agree on a Europe-wide tax fell through earlier this year when four countries — Sweden, Finland, Denmark and Ireland — declined to sign off on it. But Margrethe Vestager, currently the EU’s antitrust chief, said last week the bloc would try to find unity again if there isn’t a global agreement.

Other European countries are also planning to levy a digital tax without waiting for the OECD. Italy’s government has said it will implement a tax on digital revenues Jan. 1, and Boris Johnson‘s conservative party, which leads the polls in the U.K. election, has committed to a digital services tax.

To contact the editors responsible for this story: Fergal O’Brien at fobrien@bloomberg.net, ;Margaret Collins at mcollins45@bloomberg.net, Brendan Murray, Ana Monteiro