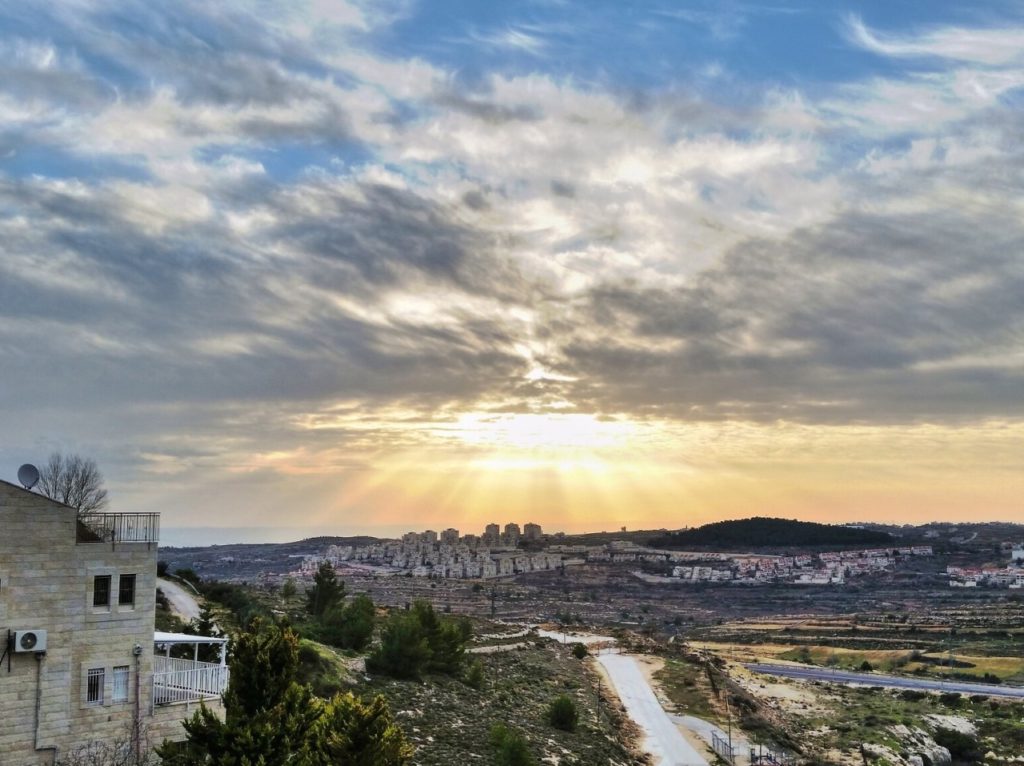 Today, 450,000 Jews live in the heart of the Jewish homeland in Israel’s Judea and Samaria regions – the holy land where Jewish people lived and prayed for thousands of years.

Judea/Samaria is where Abraham purchased a burial cave and surrounding lands; where the Maccabees fought off foreign invaders and Hellenists; where the shepherd David tended his flock, was anointed king, and first established his kingdom; and where Hebron’s ancient Jewish community lived for centuries, until Arabs massacred the Jewish community in 1929. It is where the Jewish people planted the fields and cultivated its spiritual heritage.

It was thus a great moment last month when Secretary of State Mike Pompeo affirmed the truth: that Jewish towns and communities, a.k.a. “settlements,” in the Jewish homelands of Judea and Samaria are not illegal under international law, and are not an obstacle to peace.

Secretary Pompeo’s statement was widely praised in Israel, including by both major political parties, and by Israel’s strongest U.S. friends such as our organization, the Zionist Organization of America (ZOA) and Christians United for Israel (CUFI).

But almost half of the House Democrats, 107 of them, sent a perfidious, Israelophobic letter, demanding that Secretary Pompeo should reverse the his simple statement of the legal truth.

The 107 Democrats falsely claimed that it is “illegal” for Jewish people to live, work, pray, have businesses, and study in Judea and Samaria.  They ignored Judea/Samaria’s long Jewish history, U.S. treaty obligations, and additional binding international treaties and doctrines guaranteeing the Jewish people’s unequivocal rights to settle these lands under international law, including:

Moreover, the settlement of Judea and Samaria does notviolate the Fourth Geneva Convention. Instead of examining – or even mentioning –  any of the applicable international law, the 107 Democrats’ anti-Israel Letter wrongly labeled Judea/Samaria “occupied Palestinian territory,” and falsely and absurdly claimed that Jewish “settlements” violate Article 49 of the Fourth Geneva Convention – an inapplicable document aimed at the Nazis’ extermination and slave-labor policies.

The 107 Democrats’ attempt to use the Fourth Geneva Convention to ethnically cleanse Jews from Judea/Samaria is particularly pernicious, because it is the polar opposite of the Convention’s purpose.

The late renowned international law professor Julius Stone stated that it would be historically incorrect, ironic, absurd and tyrannical to claim that “Article 49(6), designed to prevent repetition of Nazi-type genocidal policies of rendering Nazi metropolitan territories judenrein [devoid of Jews], has now come to mean that. . . the West Bank [Judea/Samaria] . . . must be made judenrein and must be so maintained, if necessary by the use of force by the government of Israel against its own inhabitants.”

Finally, Jewish communities in Judea and Samaria are not an “obstacle to peace.” The 107 Democrats’ anti-Israel Letter also promoted a so-called “two-state solution” – a euphemism for eliminating Jewish communities and creating a Hamas-Fatah-Hezbollah-Iranian-proxy-Palestinian-Arab terror state on Israel’s sovereign land.  Such a state would be the real “obstacle to peace,” because it would place every Israeli within rocket range.

The real “obstacles to peace” are also that the Palestinian Authority (PA) continues to preach hatred and violence towards Jews in every conceivable venue (schools, media, mosques, sports teams, etc.); pays stipends to jailed terrorists and the families of dead terrorists; and seeks to annihilate the Jewish state and her people. The PA has turned down generous offers of a Palestinian Arab state multiple times, to avoid giving up its genocidal goal of completely destroying Israel.

The 107 Democrats’ Anti-Israel Letter also had the gall to invoke the term “human rights” while demanding that the Jewish people should be denied their most basic lawful human right to live in the Jewish homeland.

To borrow phrasing from the great former Democrat Daniel Patrick Moynihan, then serving as U.S. Ambassador to the United Nations during the infamous 1975 “Zionism is racism” debate, the 107 Democrats’ lie — that Jews are “illegal occupiers” of lands to which the Jewish people have the sovereign legal right — is simply today’s “new justification for excluding and persecuting Jews” – and is an abuse of the “language of human rights.”

Morton Klein is the National President of the Zionist Organization of America (ZOA).  Elizabeth Berney, Esq. is ZOA’s Director of Special Projects.

Remarkable image of Christ-like figure is spotted in swirling clouds above...

Google Whistleblower Suggests His Wife’s Fatal Car Crash May Not Have...